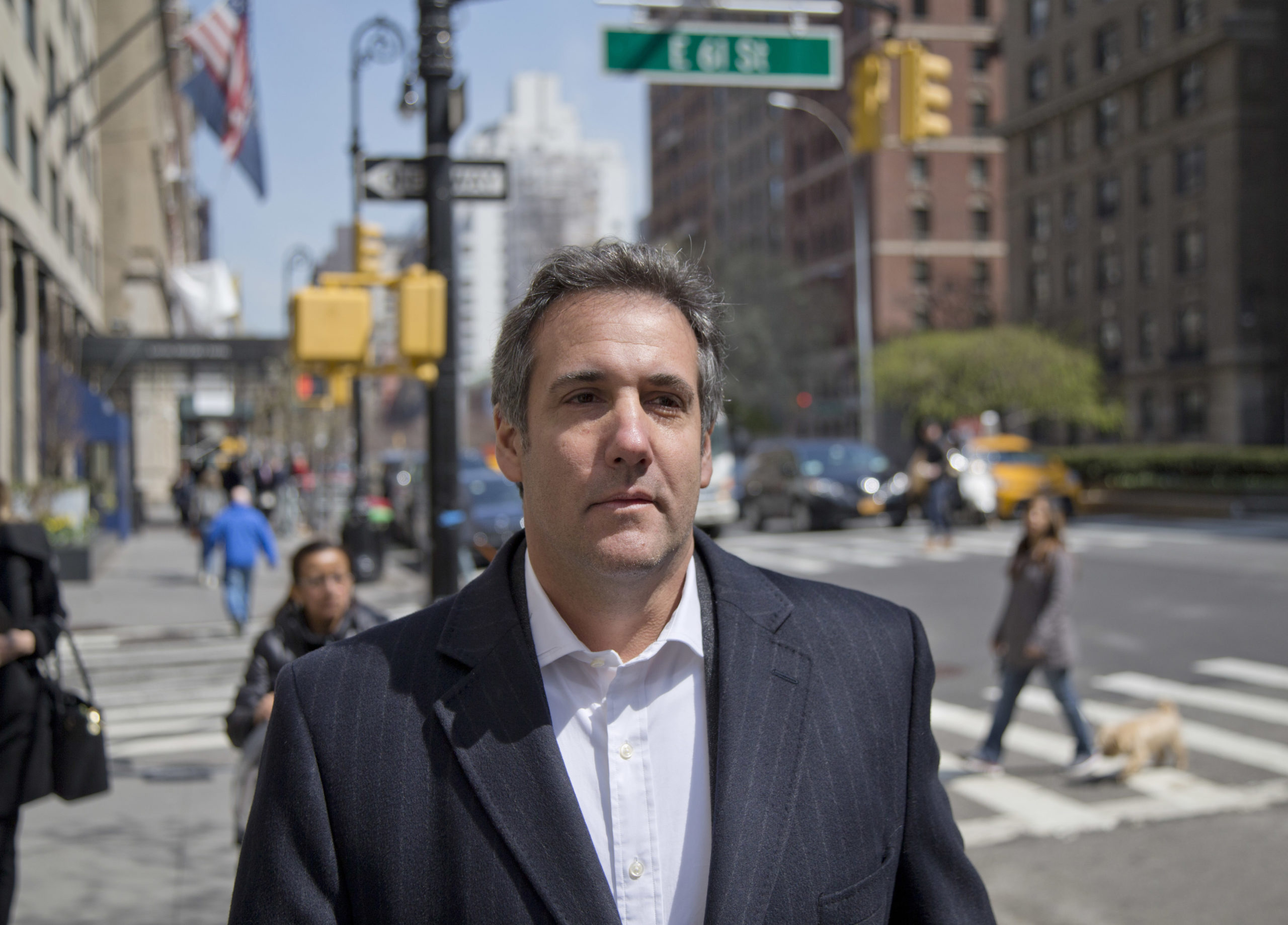 NEW YORK — After once boasting he would “take a bullet” for Donald Trump, the president’s longtime personal lawyer and fixer Michael Cohen fired a possible warning shot toward the White House, saying he now puts “family and country first.”
In his first interview since federal agents raided his home and hotel room three months ago as part of an investigation into his business dealings, Cohen made clear that protecting Trump is not his priority.
“My wife, my daughter and my son have my first loyalty and always will,” Cohen told ABC’s George Stephanopoulos in an off-camera interview that was reported on Monday’s “Good Morning America.” ”I put family and country first.”
Cohen, who hasn’t been charged, wouldn’t say if he would cooperate with prosecutors in the probe. But he also did nothing to dampen such speculation, taking issue with some of Trump’s criticisms of the special counsel’s Russia investigation and even going out of his way to praise the FBI.

“I don’t agree with those who demonize or vilify the FBI,” Cohen was quoted as saying. The raid, he added, “was obviously upsetting to me and my family. Nonetheless, the agents were respectful, courteous and professional.”
Robert Mintz, a former federal prosecutor now in private practice, said that Cohen “has sent every signal he possibly can to prosecutors that he will put his own interests first and will jump at any deal that may save him from going to jail.”
“By putting distance between himself and the president on issues both large and small,” Mintz added, “he’s telegraphing to prosecutors that he intends to be his own man and in the end will do exactly what he thinks is best for himself and his family.”

Cohen was Trump’s self-described fixer and a key player in the Trump Organization for more than a decade, regularly berating reporters and threatening lawsuits against anyone who posed a challenge to his boss.
In a Fox News interview last year, Mr. Cohen declared: “I will do anything to protect Mr. Trump.” He also told Vanity Fair, “I’m the guy who would take a bullet for the president,” adding, “I’d never walk away.”
A day after he tweeted “I will always protect my POTUS” in April, the FBI raided his home, office and hotel room as part of a probe by federal prosecutors in New York into his business dealings.

Among other things, investigators are looking into a $130,000 payment he handled as part of a confidentiality agreement with porn star Stormy Daniels, who says she had an affair with Trump in 2006. Trump denies that.
Cohen in the past has said that the payment was made on his own initiative. But in the ABC interview, he said he couldn’t comment on advice of his lawyer.
“I want to answer. One day I will answer,” he said.
Stephanopoulos said he asked Cohen repeatedly if he was considering cooperating with prosecutors in their investigation. Cohen responded that if he is charged with anything, he would defer to his new lawyer in the case, Guy Petrillo, for advice. Petrillo did not immediately respond to a request for comment.
Cohen repeated previous denials that he had any involvement with Russian attempts to interfere with the 2016 presidential election, but he refused to criticize the investigation led by former FBI Director Robert Mueller.
“I don’t like the term ‘witch hunt,'” Cohen was quoted as saying.

Cohen: ‘I Will Not Be a Punching Bag’

He was asked how he might respond if the president or his legal team came after him and tried to discredit the work he did for Trump over the last decade.
“I will not be a punching bag as part of anyone’s defense strategy,” Cohen said. “I am not a villain of this story, and I will not allow others to try to depict me that way.”
He also told ABC he did not agree with Trump’s recent tweet repeating Vladimir Putin’s claim that Russia did not interfere in the election.
“Simply accepting the denial of Mr. Putin is unsustainable,” Cohen said. “I respect our nation’s intelligence agencies’ … unanimous conclusions.”