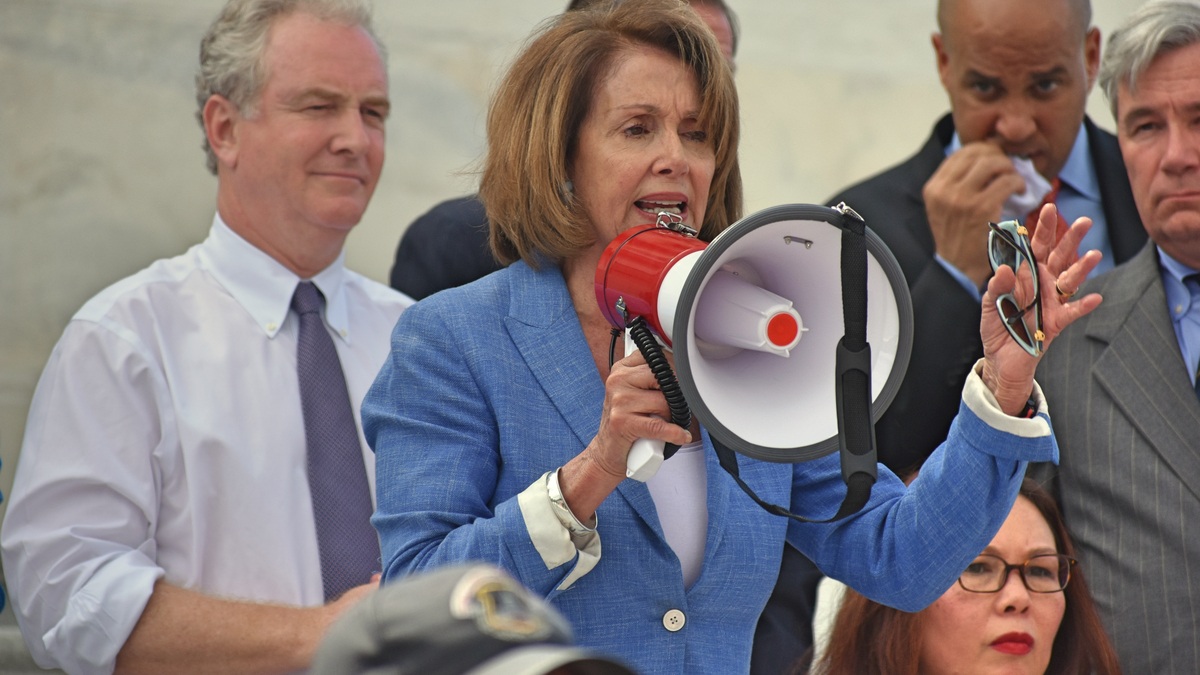 Fresh off her failure to protect illegal immigrants, House Minority Leader Nancy Pelosi has her sights set on the 2018 midterms. And she’s not shy about it: “I just want the Democrats to have the gavel. It doesn’t have to be me, but I’m good at what I do.”

Republicans beg to differ. In fact, Republican campaigns are already branding Pelosi as the face of the Democratic Party to win voters across the country. As Matt Gorman, spokesman for the National Republican Congressional Committee, recently put it: “The fact that Nancy Pelosi is the face and leader of the Democratic Party is the gift that keeps on giving for the NRCC. As her colleagues openly grumble that she’s a liability for 2018 and she continues to be the most unpopular politician in the country, I can only say one thing: Go, Nancy, go.”
Even some Democrats are hoping she stops, stops, stops. In the words of Rep. Filemon Vela of Texas: “I think you’d have to be an idiot to think we could win the House with Pelosi at the top.” Another Democrat recently called her eight-hour House speech a political “stunt.”
The media are equally skeptical. CNN’s Chris Cillizza recently suggested Pelosi is the “Republicans’ secret weapon,” while The Washington Post has highlighted “the Democrats’ persistent Pelosi problem.” Here’s why:

Pelosi’s approval rating consistently remains below 30 percent. Even the left-leaning HuffPost’s Pollster pegs her approval at 28.6 percent. When asked if Pelosi should remain in a House leadership position, nearly half of Americans say she should be replaced. In a Washington chock-full of unpopular politicians, Nancy Pelosi leads the pack.
Her unpopularity is even worse considering the increasing popularity of President Trump’s pro-growth policies. Not only is the president’s approval rating steadily increasing, but 70 percent of Americans rate the U.S. economy as “excellent” or “good” — up from 53 percent in April 2017. Most Americans believe Trump is more responsible for the booming economy than President Barack Obama.
How do you message that one, Nancy?

Pelosi personifies a Washington swamp filled with hypocrisy, lies and elitist sentiment. She epitomizes why 63 million Americans voted for President Trump to drain the swamp and hold establishment politicians accountable to their constituents.
This is the same Nancy Pelosi who defended Obamacare’s passage with: “We have to pass the bill for you to find out what’s in it.” Two years later, she promised “everybody will have lower rates.” Fast forward to 2018, and premiums for the benchmark Obamacare plan will increase 37 percent on average. Because of Obamacare, millions of Americans lost their health insurance coverage altogether, while millions more are seeing higher rates this year and beyond.
Most recently, Pelosi described the Tax Cuts and Jobs Act as “Armageddon” and dismissed $1,000 bonuses as “crumbs.” To date, more than 345 U.S. employers have announced tax reform pay increases, 401(k) hikes, or bonuses, benefitting more than 3.5 million working Americans. While $1,000 may seem like “crumbs” to a San Francisco Democrat with a $30 million net worth, many Americans see a four-figure bonus as a month’s rent or a year’s worth of gas station trips.

And then there’s the Democratic Party’s Achilles’ heel: Immigration, arguably the top issue that propelled President Trump to the White House. Pelosi is effectively the poster child of the amnesty movement — the same movement that justifies and enables immigrant crime. After Kate Steinle was murdered in San Francisco by an immigrant who came to the United States illegally, Pelosi blamed the “easy access to guns.” Instead of blaming a criminal here illegally, she exploited Steinle’s death to promote gun control.
Pelosi’s top priority is the Deferred Action for Childhood Arrivals program, for which she is willing to shut down the government — at the expense of American citizens. Pelosi has even compared DACA immigrants to Japanese-American citizens forced into temporary internment camps during World War II. As she put it: “While their family members were fighting for freedom for America and for the world, they were in camps. And they came for them. And now they are coming for the dreamers.”
Is that how Nancy Pelosi and her Democratic candidates will appeal to American voters? Bring it on. Republican candidates — many running in Trump districts that Democrats must carry — will pummel Democrats touting their Pelosi ties and her misguided “America Second” policies.
Even as political experts and media elites predict a “blue wave” in November, the roadmap to Republican victory starts and ends with America’s most detestable Democrat. Go, Nancy, go.