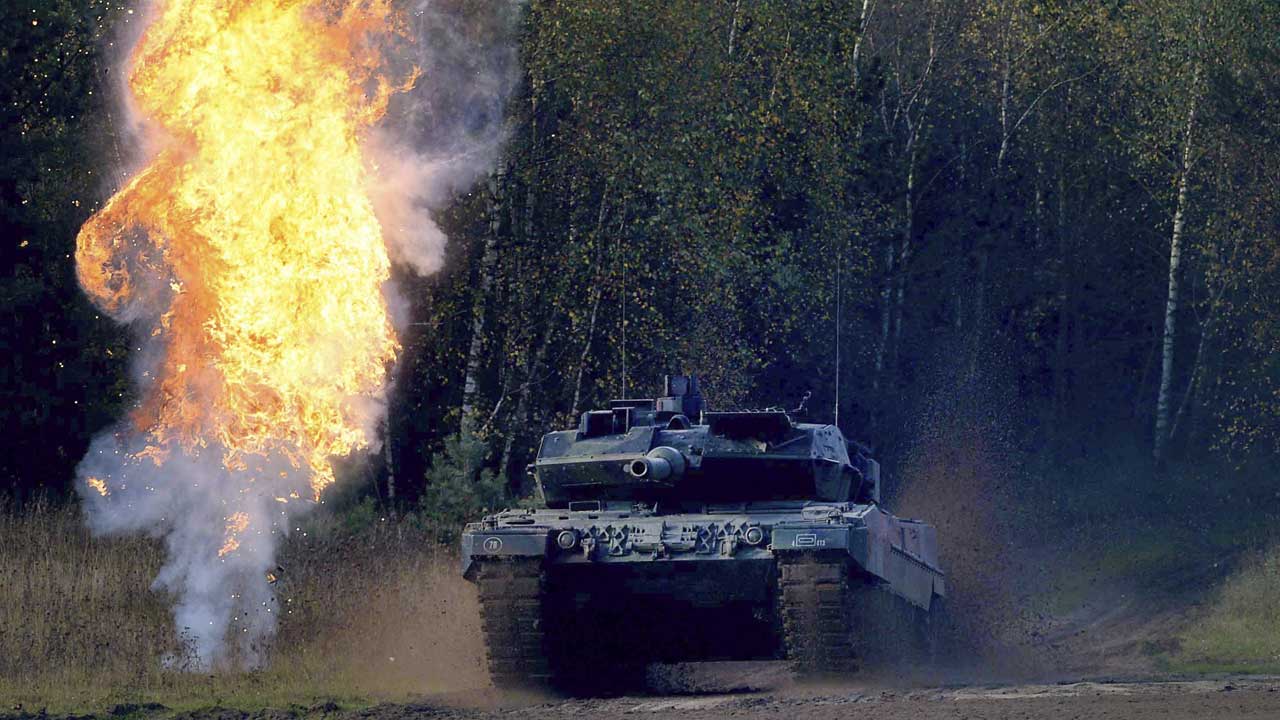 A Leopard 2A6 tank drives through the terrain during a training exercise in Germany. (Peter Steffen/dpa via AP file)
Share with friends

After weeks of hesitation that saw growing impatience among Germany’s allies, Chancellor Olaf Scholz announced Wednesday that his government would provide Ukraine with Leopard 2 battle tanks and approve requests by other countries to do the same.

In a statement, the German government said it would initially provide Ukraine with one company of Leopard 2 A6 tanks, which comprises 14 vehicles, from its own stocks. The goal is for Germany and its allies to provide Ukraine with a total of two battalions, or 88 tanks.

“This decision follows our well-known line of supporting Ukraine to the best of our ability,” Scholz said after a Cabinet meeting in Berlin.

The long-awaited decision came after U.S. officials said Tuesday that a preliminary agreement had been struck for the United States to send M1 Abrams tanks to help Ukraine’s troops push back Russian forces that remain entrenched in the country’s east almost a year after Russia invaded its neighbor.

Scholz had insisted that any decision to provide Ukraine with powerful Leopard 2 tanks would need to be taken in conjunction with Germany’s allies, chiefly the United States. By getting Washington to commit some of its own tanks, Berlin hopes to share the risk of any backlash from Russia.

Ekkehard Brose, head of the German military’s Federal Academy for Security Policy, said tying the United States into the decision was crucial, to avoid Europe facing a nuclear-armed Russia alone.

But he also noted the deeper historic significance of the decision.

“German-made tanks will face off against Russian tanks in Ukraine once more,” he said, adding that this was “not an easy thought” for Germany, which takes its responsibility for the horrors of World War II seriously.

“And yet it is the right decision,” Brose said, arguing that it was up to Western democracies to help Ukraine stop Russia’s military campaign.

German Defense Minister Boris Pistorius cautioned that it would take about three months for the first tanks to be deployed in Ukraine. He described the Leopard 2 as “the best battle tank in the world.”

“This is an important game change, possibly also for this war, at least in the current phase,” he said.

The German government said it planned to swiftly begin training Ukrainian tank crews in Germany. The package being put together would also include logistics, ammunition and maintenance.

Kremlin spokesman Dmitry Peskov described German and U.S. intentions with the tanks as a “a rather disastrous plan.”

“I am convinced that many specialists understand the absurdity of this idea,” Peskov told reporters Wednesday.

“Simply because of technological aspects, this is a rather disastrous plan. The main thing is, this is a completely obvious overestimation of the potential (the supply of tanks) would add to the armed forces of Ukraine. It is yet another fallacy, a rather profound one,” the Kremlin official said.

Peskov predicted “these tanks will burn down just like all the other ones. … Except they cost a lot, and this will fall on the shoulders of European taxpayers.” he added.

Members of Scholz’s three-party coalition government welcomed the news ahead of the official announcement.

Marie-Agnes Strack-Zimmermann, a member of the Free Democratic Party who chairs the parliamentary defense committee, said the news was “a relief for a mistreated and brave Ukraine.”

“The decision to approve (other countries’ requests) and supply the Leopard 2 was arduous, but unavoidable,” she said.

Strack-Zimmermann had been one of the loudest voices calling for a swift decision on arms supplies to Ukraine.

The far-right Alternative for Germany called the decision “irresponsible and dangerous.”

“Germany risks being drawn directly into the war as a result,” its co-leader, Tino Chrupalla, said. The party, known by its acronym AfD, has friendly ties to Russia.

The Left party, which also has historic links to Moscow, warned of a possible escalation in the conflict.

“The supply of Leopard battle tanks, which ends a further taboo, potentially takes us closer to a third world war than in the direction of peace in Europe,” the party’s parliamentary leader, Dietmar Bartsch, told German news agency dpa.

The pressure on Scholz mounted this week after Poland formally asked Germany for approval to send some of its Leopards to Ukraine. Poland has been among the countries leading the call for Western allies to send tanks to Germany

“The decision to send Leopards to Ukraine is a big step towards stopping Russia,” he wrote on Twitter. “Together we are stronger.”

Other European nations, such as Finland, have also indicated a willingness to part with their own Leopard or similar battle tanks as part of a larger coalition.

Prime Minister Rishi Sunak of Britain, which had said it planned to send 14 of its Challenger 2 tanks to Ukraine, welcomed Germany’s decision to further “strengthen Ukraine’s defensive firepower.”

“Together, we are accelerating our efforts to ensure Ukraine wins this war and secures a lasting peace,” Sunak said on Twitter.

Still, it isn’t clear whether Ukraine will receive the estimated 300 tanks that analysts say are required to keep Russia from advancing in Donetsk, Luhansk and Zaporizhzhia provinces and to press a counteroffensive in the country’s southeast.

Andriy Yermak, head of the Ukrainian president’s office, said on Telegram after Germany’s announcement that “many Leopards are needed.”