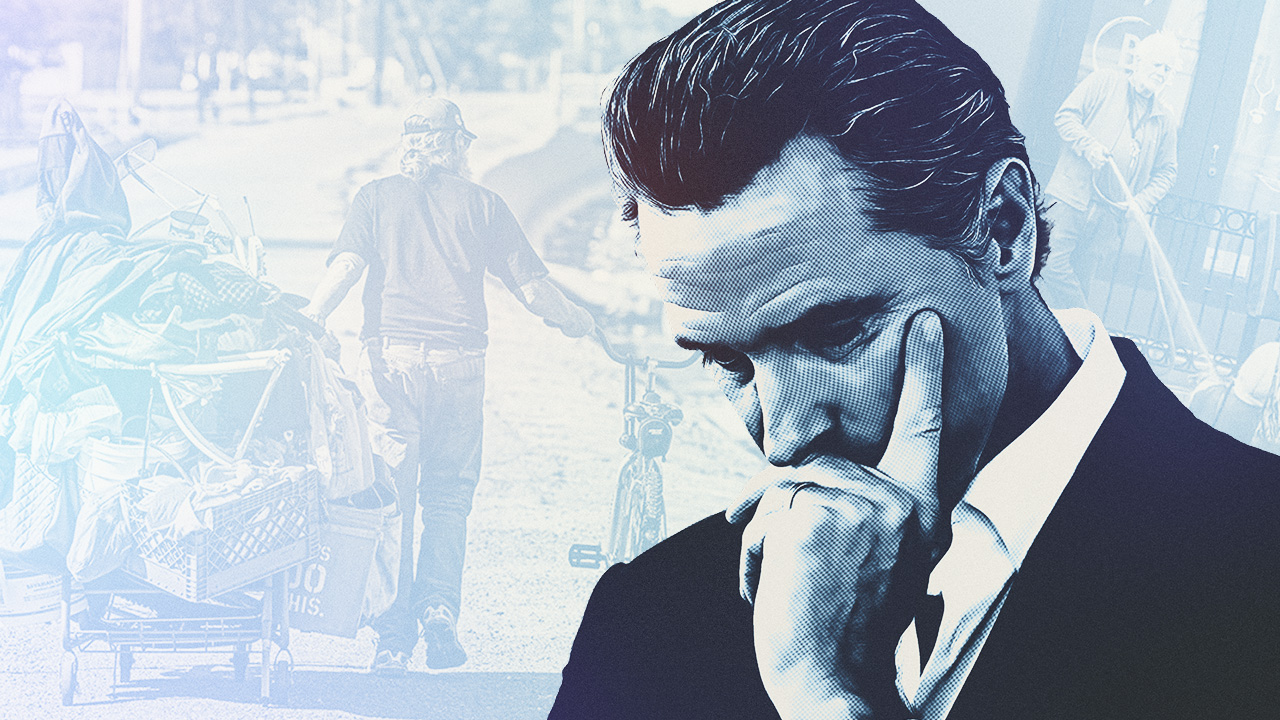 In the last two state budgets, Newsom and the Legislature have committed $17.5 billion for housing and services to the estimated 170,000 homeless Californians. (GVWire Composite/David Rodriguez)
Share with friends

Last week, a viral video showed the owner of a San Francisco art gallery using a water hose to spray a homeless woman camped outside the doorway of his business.

Gwin said he and other business owners complained to police about her blocking the sidewalks and business entrances. Efforts had been made to help her get off the streets, but nothing has worked.

“We called the police. There must be at least 25 calls to police,” Gwin said. “It’s two days in a homeless shelter, it’s two days in jail, and then they drop them right back on the street.”

Finally, after the woman once again refused to move, in frustration Gwin sprayed her down.

Gwin obviously did the wrong thing, but the incident dramatized the frustration that millions of Californians feel about the squalid encampments of homeless people that have become the defining feature of urban California.

Gov. Gavin Newsom acknowledged the growing resentment as he introduced his new state budget last week. “People have just had it,” he told reporters. “They want the encampments cleaned up.”

In the last two state budgets, Newsom and the Legislature have committed $17.5 billion for housing and services to the estimated 170,000 homeless Californians – about $100,000 each. However, as Newsom’s new budget acknowledges, “Despite unprecedented resources from the state and record numbers of people being served by the homelessness response system, the population of unhoused individuals grows faster than the population exiting homelessness.”

The new budget adds several more billion dollars but suggests that local governments are still not doing enough – a theme that Newsom has pursued in recent months.

Last year, he rejected all of the plans that local governments had submitted, saying they fell well short of actually making real progress on reducing the upward trend. After a showdown meeting with local officials, he agreed to release more state aid.

“The first iteration of these plans made clear that more ambition is required – and more direction from the state is necessary,” the budget declares. “Accordingly, the administration plans to work with the Legislature this year to advance homeless accountability legislation.”

The budget suggests that cities failing to meet their state quotas for zoning land for new housing might lose state financing for homelessness programs.

“If we can’t clean up the encampments and address what’s happening chronically on our streets, I’m going to be hard-pressed to make a case to the Legislature to provide them one dollar more,” Newsom told reporters.

That threat doesn’t sit well with local government officials. The League of California Cities issued a sharp reaction, saying, “one-time investments will not solve the crisis” and adding, “We need ongoing state funding and a coordinated approach with clearly defined roles and responsibilities for all levels of government that supports long-term solutions.”

The exchanges suggest there is still no consensus on what combination of actions would have a visible impact and all of the politicians involved are engaged in some blame-shifting as the voting public’s patience with the squalor wears thin.

Newsom knows that if the crisis is not resolved, it will leave an indelible mark on his governorship and haunt whatever future political career moves he might make.