Frustrated with the time it takes PG&E to provide power hookups to new developments, the city of Fresno is considering forming its own public power company.

“Enough is enough,” Mayor Jerry Dyer said at a Monday morning news conference at Fresno City Hall. “PG&E is single-handedly destroying our local economy. PG&E customers, (including) the city of Fresno, have completely lost confidence with our only gas and electricity supplier. That is PG&E, and that is called a monopoly.”

The City Council is scheduled to discuss hiring a consultant about providing its own power.

The building industry is also fed up, telling state regulators that time is money — the longer it takes to energize new subdivisions, mortgages become more expensive because of increasing interest rates.

PG&E, in a statement to GV Wire, says several factors — including supply chain issues  — are to blame.

“Our most important responsibility is delivering safe, reliable and clean energy to our customers at the lowest possible cost. Currently, requests for new gas and electric service connections are outpacing our forecasted demand,” Fresno-based PG&E spokesman Denny Boyles said in an email.

“Additionally, available resources to meet the growing demand are both reduced and more costly. There are also compounding impacts from a global supply chain shortage of transformers which is outside of PG&E’s control. These factors are affecting our ability to execute projects schedules within our normal timelines. As a result, we are adjusting our business plans for the remainder of 2022,” Boyles said. 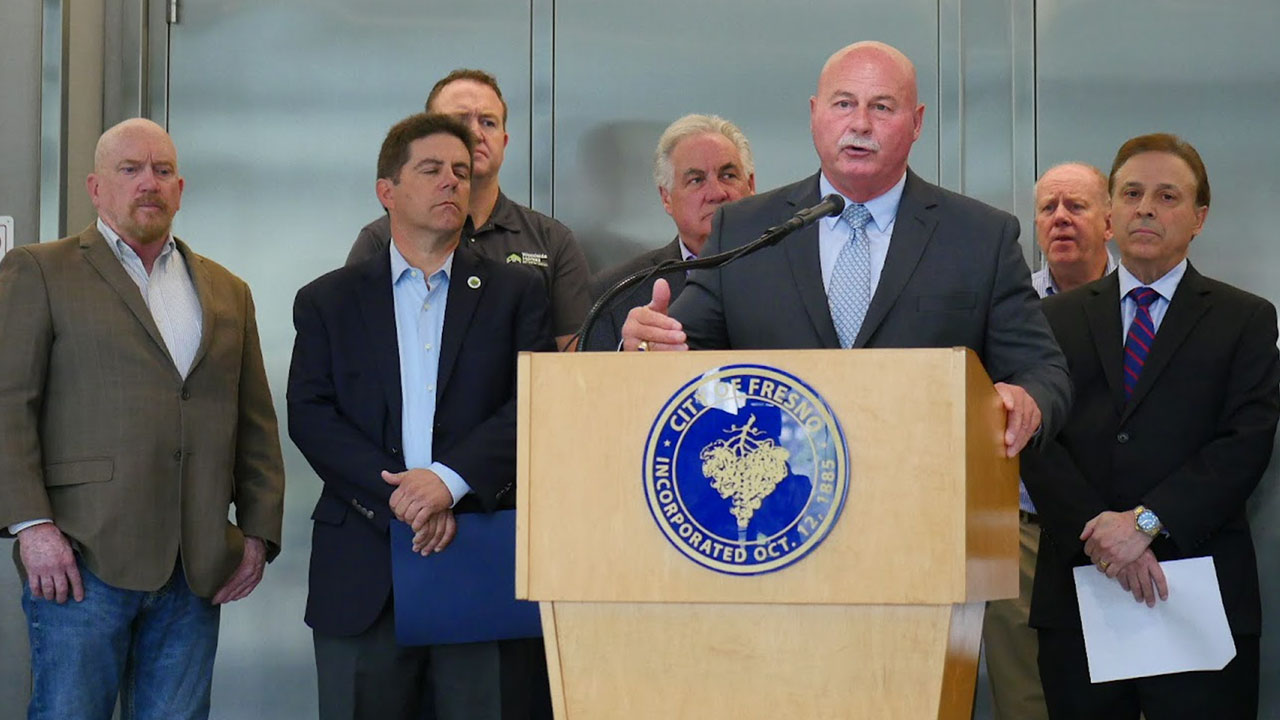 “While we understand the frustration some are feeling, exploring a public takeover will not benefit customers–whether in Fresno or elsewhere,” the company said. “PG&E’s assets are not for sale, and even exploring municipalization will likely impose significant long-term costs on local taxpayers. Carving out sections of California’s electric grid will result in a fragmented energy system that will slow progress toward California’s clean energy future, and customers in other areas of the state paying a larger share of the necessary investments for those policies.”

That only infuriated Dyer and Councilman Garry Bredefeld.

“That’s the first thing that a monopoly does,” Dyer responded, also calling the news release “self-serving.”

Bredefeld bashed the utility repeatedly, saying among other things that its initials stood for Plunder, Gouge, and Extortion. Known for his conservatism on the role of government, Bredefeld has more faith in the city than the utility.

“I trust the city much more than I trust a recidivist criminal enterprise like PG&E. I can assure you we’re not going to kill anybody. We’re not going to start wildfires and nobody’s going to die,” Bredefeld said.

Not all were convinced of the city’s moves. Councilman Miguel Arias peeked his head in at the news conference.

“It took @CityofFresno 1 year to fix broken EV stations. @FresnoCountyCA  had kids in child protective custody sleeping on desks for years. Now they want to be in charge our electricity infrastructure so they can prioritize private market rate projects above affordable housing,” Arias tweeted. 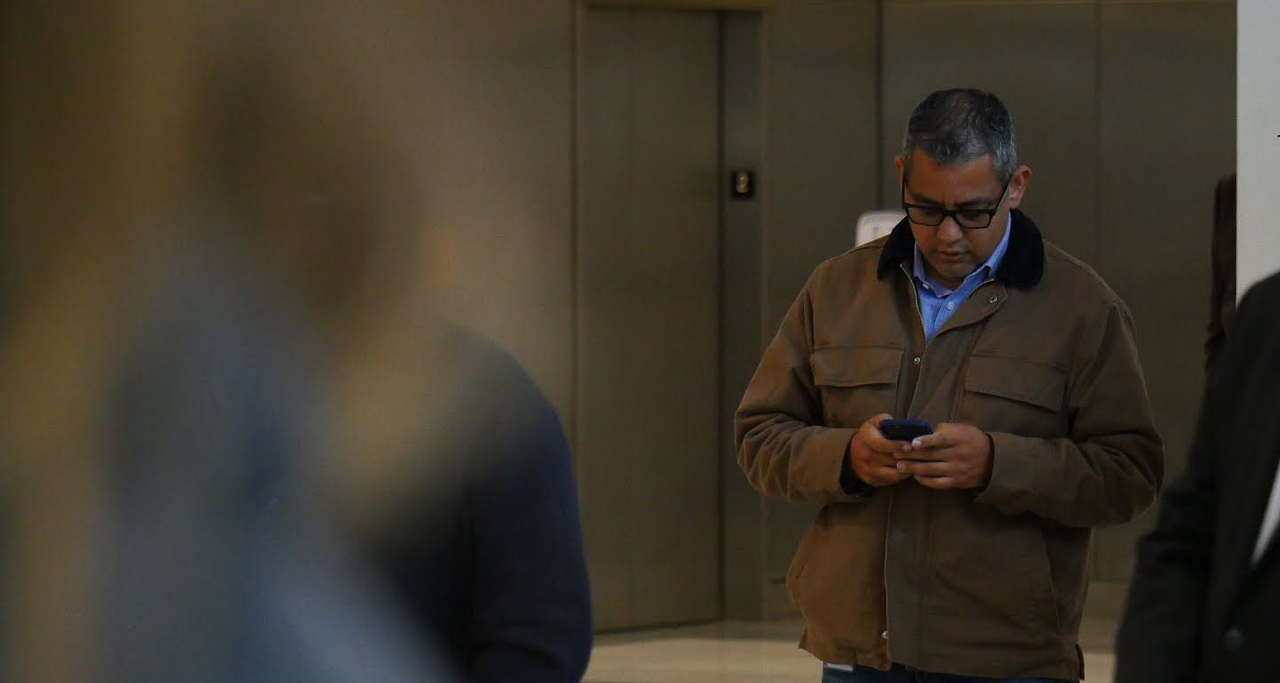 Above: Fresno City Councilman Miguel Arias briefly attended a news conference about the city forming its own power company. (GV Wire/Jahz Tello); Below: A tweet from Arias. 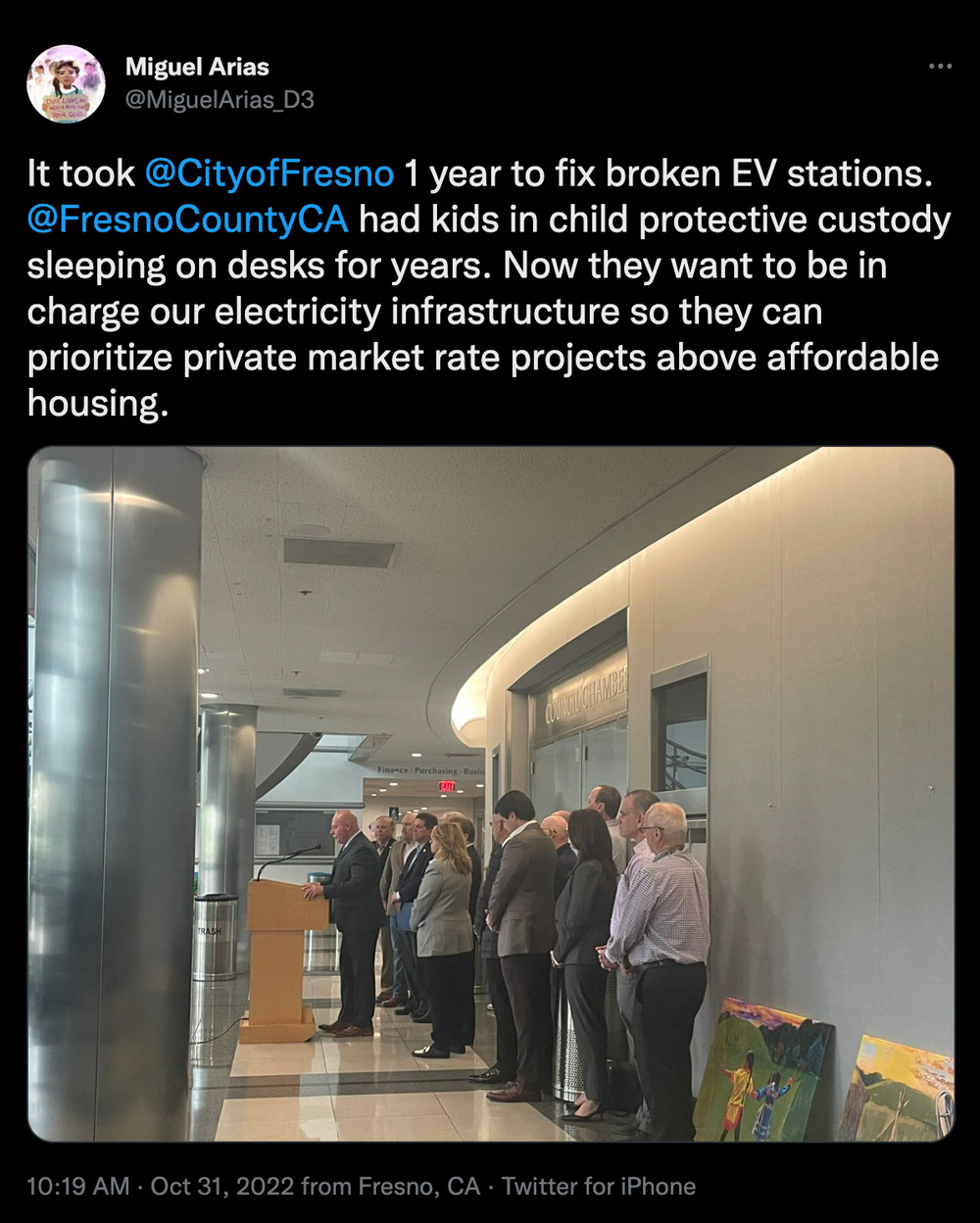 The local chapter of the Building Industry Association sent the California Public Utility Commission a letter, decrying long wait times from PG&E to power up new developments. Billions are at stake, the group said.

But home construction, “has come to a halt due to PG&E’s limited pool of approved transformer suppliers and their inability to timely deliver transformers to BIA members’ projects,” the letter said.

The wait time for transformers is currently estimated to be 18-to-24 months. Even when the equipment is delivered, there is a lack of available installation labor through PG&E or its contractors, the BIA said.

“(This) is creating a de facto moratorium on building and delaying home sales. Delaying home sales affects the buyers. Buyers are not able to close escrow and could lose rate locks and have to requalify because of the higher interest rates. Also, buyers may have sold their home and are now without a home,” BIA president Mike Prandini told GV Wire.

As many as 400 families are affected, Prandini said Monday.

A Century Communities development in Madera will wait 15 months for the transformers, and another possible five months to have them installed.

In its letter to the CPUC, the builders say similar problems don’t occur with other energy providers such as Southern California Edison or San Diego Gas and Electric.

The group is asking the state regulator to place energizing home projects as a higher priority for PG&E.

BIA said private developers built $1 billion in new housing in Madera County in 2021, and pulled $735 million worth of permits for the same year in Fresno County.

PG&E says it is working with the industry group.

“In the world of government, there are no guarantees. But I can tell you, that as the mayor of this city along with the council, we’re going to do everything we can to ensure that we’ve explored all options and able to provide electricity in the most affordable way and sustainable way to the people of Fresno,” Dyer said.

On Thursday, the council is scheduled to discuss hiring a consultant “to perform a feasibility study.” Dyer expects results from the study in 120 days. Neither he nor Bredefeld offered an estimate on the cost of the study.

“We will spend what we need to spend because we are representing and defending our constituents,” Bredefeld said.

As Voters Decide on Support Tax, How Does Fresno Rank for Veterans?

Rain Is Coming Fresno’s Way. When Can You Expect It?