Council Approves $55,000 Pay Hike for Themselves. Here's How They Voted 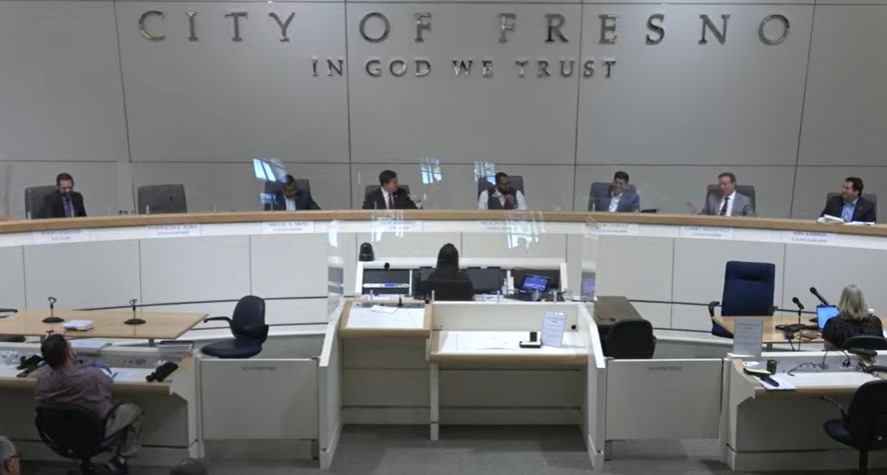 Members of the Fresno City Council currently earn $80,000 annually. They voted on a proposal to raise the salary to $135,000. (City of Fresno Video Feed)
Share with friends

The Fresno City Council was split on Thursday over a plan for a massive pay raise that will benefit some current members.

The proposal, which passed 5-2, would raise the pay of councilmembers by 69% (from $80,000 to $135,044 annually). Increases would take effect when a member is sworn in for a new term. Salaries would be tied to the rate of pay of the Fresno County Board of Supervisors. When the board salary increases, the council’s pay would increase as well.

News of the raise — broken by GV Wire Tuesday — was the main subject of local talk radio on Wednesday. Only a few public speakers voiced their opinion of the raise, mostly negative.

The council would have to vote a second time at a future meeting.

Chavez and Karbassi, two of the three sponsors, says raising salaries would draw a better caliber of candidates.

“My hope is that in the future we attract highly qualified professional candidates for the position,” Chavez said.

Karbassi acknowledged the timing of a pay raise, with inflation running high and many analysts predicting a recession in the coming months.

“I totally understand that when gas is above $6 a gallon it sounds almost crazy to be able to bring a proposal forward,” Karbassi said.  “We need to do something to attract people to be able to come here.”

Bredefeld argued that $80,000 is fair for the work council does and the salary compares well with several other cities.

“The salary increases are clearly not justified,” Bredefeld said.

Bredefeld said the raise itself is more than what most Fresnans earn. He also cited examples of his colleagues “wasting” taxpayer money.

He also questioned the timing, coming weeks after a June 7 election where voters decided four seats. Miguel Arias, Luis Chavez and Nelson Esparza won re-election; Annalisa Perea won a term for a new seat. Swearing-in takes place in January, and all will benefit from the increase.

“The voters did not know that (councilmembers) were actually going to bring this forward, which I think is unfair,” Bredefeld said. “That’s dishonest to their constituents. And I think for that reason alone, it shouldn’t even be happening.”

Arias: More Than He Expected

Councilman Miguel Arias thought the City Council would be a part-time job. He discussed the complex nature of the job, the expectation to attend nearly every event, and dealing with harassment.

Before winning election in 2018, Arias was a spokesman at Fresno Unified. He said he took a pay cut to become a councilman and could no longer contribute to his pension.

He said the City Council makes sure that its employees are the highest paid in the Central Valley. The same should be applied to the council, he argued.

“Asking somebody to serve should not come at the expense of their financial security or their physical safety,” Arias said.

The compensation increase would not include a pension.

Mayor Jerry Dyer has the ability to veto the bill, even though it received a veto-proof five votes.

The mayor expressed his concern about the pay raise in a Wednesday statement.

“While I do not question the number of hours worked by councilmembers and the complexity of their job, I am concerned with the message this will send to our employees as well as our taxpayers. A 69 percent raise in one year is significant. A more responsible approach would be to provide incremental pay increases over time that will allow elected officers to receive salaries comparable to cities similar to Fresno. An alternative approach would be to take it before voters as was done in San Diego in 2018,” Dyer said.

A supervisor’s salary is currently set at 60% of what a Superior Court judge is paid, as a result of a 1994 resolution. The current salary for judges is $225,074. In turn, state law determines judge salary increases as well as raises other state employees receive.

We really should be fixing their salaries and the little scam they’ve got going on, they’re not joining them,” Bredefeld said.

Posts Warn ‘All’ Strays to be Euthanized Ahead of New Fresno Shelter Opening. What Agency Says