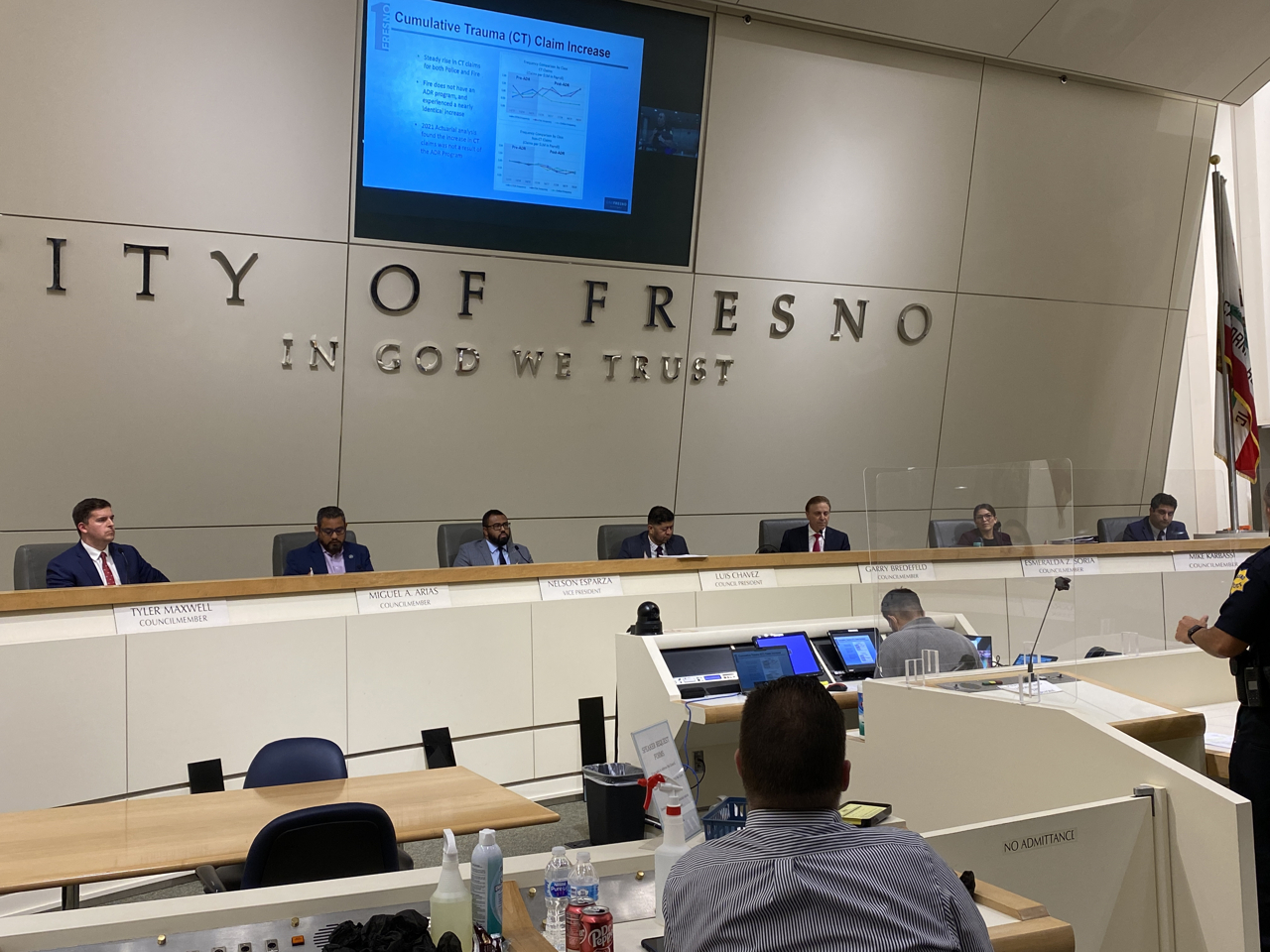 The Fresno City Council will consider giving itself a 69% raise. (GV Wire/Jahz Tello)
Share with friends

A proposal from the Fresno City Council would give elected officials a dramatic pay raise in future years.

Wanting to be in line with what Fresno County Supervisors are paid, the salary of a new councilmember would go from $80,000 to $135,044, a 69% raise according to the plan.

The proposal is sponsored by councilmen Tyler Maxwell, Mike Karbassi and Luis Chavez.

Related Story: Council Approves $55,000 Pay Hike for Themselves. Here’s How They Voted

“This is something that the City Council failed to properly address back in 2018. While I will not benefit from this increase, I do support tying the salary to a benchmark,” Karbassi said. “My hope is that this will be the last time politicians in Fresno will ever have to vote on their salaries.”

A supervisor’s salary is currently set at 60% of what a Superior Court judge is paid, as a result of a 1994 resolution. The current salary for judges is $225,074. In turn, state law determines judge salary increases as well as raises other state employees receive.

“While I would not benefit from a salary increase, I do support tying council salaries to a benchmark. This provides the greatest transparency while also taking the ability to vote on future raises out of the hands of councilmembers,” Maxwell said. “Unlike the Board of Supervisors, City Councilmembers don’t earn a pension or any kind of retirement, a fact that will still hold true even if this proposal passes.”

The raises would take effect when a councilmember starts a new term. Councilwoman-elect Annalisa Perea, and councilmen Miguel Arias, Luis Chavez and Nelson Esparza could be the first to benefit. They all won their election in June and take office (or will be sworn in for a second term) in January.

Bredefeld is in his second and final term and would not see a raise. Soria is termed out. Maxwell and Karbassi would benefit from the pay increase if they win re-election in 2024.

Mayor Would Get Pay Bump, Too

The mayor and city council president would also receive raises if the plan is approved.

A 2020 report from The San Francisco Standard said only the mayors of San Francisco and Los Angeles would earn more than Fresno’s mayor.

Fresno Mayor Jerry Dyer is not convinced this is the best plan.

“I am concerned with the message this will send to our employees as well as our tax payers, as the raises are significant. I think a more moderate approach should be taken that provides annual pay raises similar to that of employees,” Dyer told GV Wire after this story first published.

The city council president, who normally earns $5,000 more than the other councilmembers, would have salary tied to the chairman of the Board of Supervisors. The chair earns 12.5% more than his or her colleagues. The current rate is $151,925.

Arias: A Budget Man in Motion

During the first stage of Fresno’s budget hearings, the city council made 75 motions on how to spend $1.7 billion.

Miguel Arias made the most of any councilmember, offering 22 motions. They range from eliminating entry fees at city regional parks, to a funding mechanism for Advance Peace.