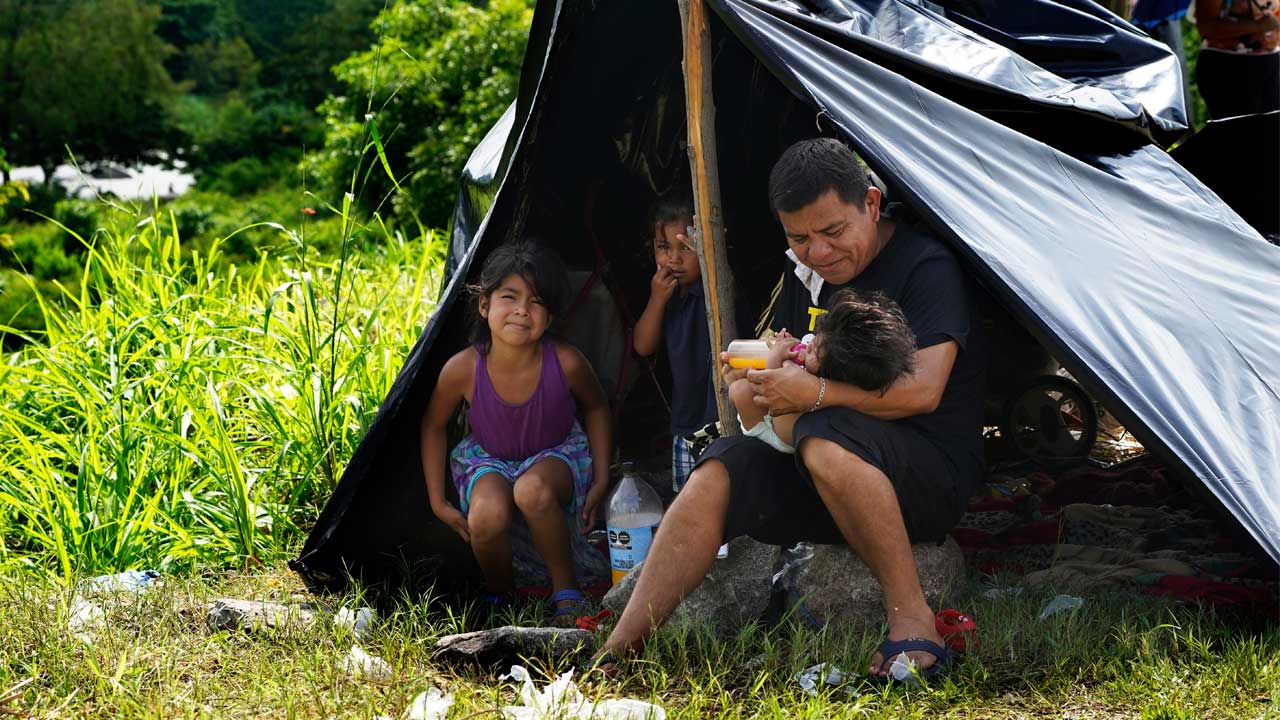 HUIXTLA, Mexico — After walking for two days along rural highways in southern Mexico with several thousand other migrants, Venezuelan Wilber Pires spent what was supposed to be a day of rest for the caravan asking for help to buy medicine for his daughter.

Two-year-old Valesca Pires was hospitalized in Huixtla overnight with a high fever. Other children in the extended family of 18 were sick as well and covered with mosquito bites. Under the roof of a covered court where migrants slept side-by-side on sheets spread over concrete, adults tended to battered feet after walking some 25 miles since departing Tapachula Monday.

“If it’s hard for an adult imagine it for her,” Pires said of his daughter.

Venezuelans make up a large proportion of this caravan, the biggest of the year, in contrast to previous ones. A factor appears to be a policy change implemented by Mexico in January requiring Venezuelans to acquire a visa to enter the country.

Before that change, Venezuelans had flown to Mexico City or Cancun as tourists and then made their way comfortably to the border. Many made it from home to the U.S. border in as little as four days.

Encounters with Venezuelans at the southwest border plunged from 22,779 in January to 3,073 in February, according to U.S. Customs and Border Protection. In April, the most recent month available, there were 4,103 encounters.

But the flow of Venezuelan migrants has continued. Since January, more than half of the 34,000 migrants who crossed the treacherous Darien Gap between Colombia and Panama were Venezuelans, according to Panama’s National Migration Service.

The visa requirement drove the flow of Venezuelans into the shadows. Those traveling in the caravan are just the visible sign of who is traveling through Mexico out of public view. Many other Venezuelans have likely turned to smugglers.

It was in January, the same month when Mexico imposed the visa requirement, that Pires and other extended family members spread across two cities in Venezuela began a group chat on a messaging platform that would eventually lead to a decision months later to leave their country en masse. 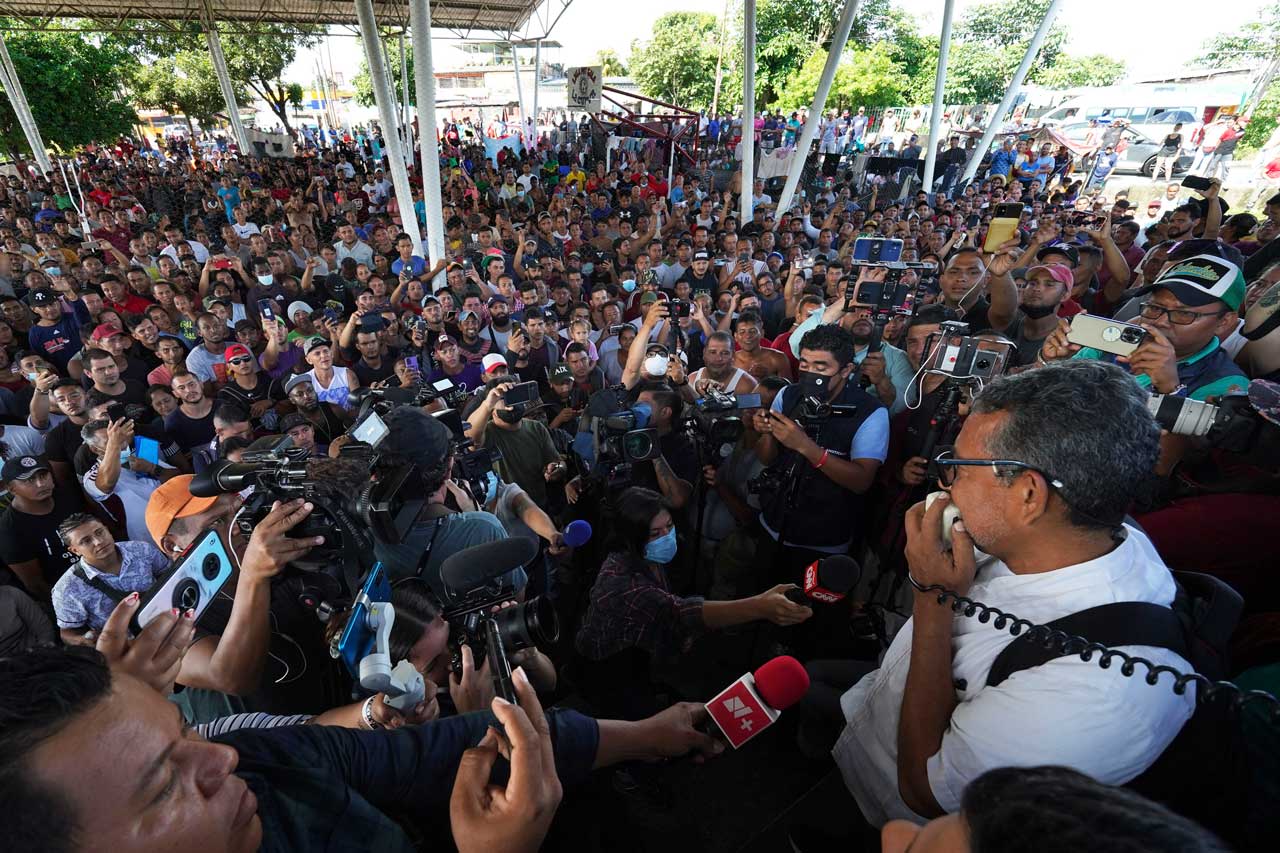 Luis Garcia Villagran, coordinator of the Center for Human Dignification A.C., talks during an assembly with migrants, many from Central America and Venezuela, sheltering in a sports complex in Huixtla, Chiapas state, Mexico, Wednesday, June 8, 2022. The group left Tapachula on Monday, tired of waiting for their status in a region with little work and far from their ultimate goal of reaching the United States. (AP/Marco Ugarte)

Man Earns $6 a Week in Venezuela

Wildre Pires Álvarez, another cousin traveling with his wife and two children, said it took three months of discussion to decide to leave.

“I was earning $3 to $6 a week,” Pires Álvarez said. “But if you ask me how far that reached: a kilo of rice, a kilo of pasta, a kilo of beans, and there went my $6.” Family members complained of frequent electrical blackouts, scarcity, and a lack of basic services.

“The goal is the United States,” he said. “The dream is to work and be able to support more family members who stayed in Venezuela.”

The extended family of 18, including eight children, traveled from Venezuela to Mexico’s southern border in 15 days.

On the first of the three days it took to navigate the thick jungle of the Darien between Colombia and Panama, Pires’ cousin Eymar Hernández, passed out.

“He had a problem and they had to help him, give him fluids, air,” she said. “He was really bad in the jungle and that was really hard for me because I was scared about what would happen.”

Related Story: A Record Number Of Immigrants Have Become Billionaires In The U.S.

The family requested asylum in Tapachula, but were given appointments in July to begin the process. They said they did not have enough money to be able to wait that long in a city where work and affordable housing have been scarce.

Jenny Villamizar, Hernández’s wife, said the constant uncertainty, the overwhelming fear that they will not be able to continue, has been awful.

“This is terrible anguish not knowing what we’ll be able to achieve, what we’re going to be able to do,” Villamizar said.

Negotiations between the migrants, their advocates, and the Mexican government continued Wednesday. Recently, the government has dissolved other caravans by offering to move migrants to other cities where they could legalize their status more quickly.

Finding consensus on managing migration flows in the region was a top priority for representatives meeting this week at the Summit of the Americas in Los Angeles.

Jesús Enrique González, another Venezuelan migrant traveling with 10 relatives, including his seven children, said the money he made as a butcher at home was no longer enough to make ends meet with constantly rising prices.

So they left and have been traveling for two months.

Since Panama, González’s children have been critical in helping their father continue. He fell while crossing the Darien Gap and broke his left foot, an injury that requires surgery, which he has so far been unable to attain.

The 53-year-old man is alternating between crutches and a wheelchair pushed by relatives and friends as the family continues northward. They were the last migrants to reach Huixtla on Tuesday.

“We fought until the end to stay in our country because everyone loves their country,” González said. “But seeing how everything was a struggle and we never reached a goal, we decided to leave.”