An architectural rendering of a building on the Francine and Murray Farber Educational Campus scheduled to open in August 2023. (SIM-PBK).
Share with friends

That is the situation facing Fresno Farms, which was one of 21 applicants granted a preliminary permit. Its location at 3849 E. Ventura Avenue is within 800 feet of the planned Francine and Murray Farber Educational Campus at the southwest corner of Ventura Avenue and 10th Street.

The nearly 13-acre campus is on the site of the former “Hall of Shame” juvenile detention center that Fresno Unified purchased from the county in 2018. Besides classrooms, the campus will feature a library, student union, community center, 350-seat cafeteria, and an early education center for the children of parents attending the school.

One school board member doesn’t want Fresno Farms to open.

“We haven’t even opened (the school) yet, and they’re already trying to sabotage the area,” Fresno Unified Trustee Keshia Thomas said.

When the school is built — an August 2023 opening — city officials told Fresno Farms they would have to shut down. Cannabis business permits must be renewed yearly.

Rita Tsalyuk, the company’s CEO and also an owner, believed the new school would be an adult vocational facility.

“We wouldn’t choose that location to begin with. But since this location was chosen, that’s a lot of money involved in this. It’s not fair to us, and it’s not a good thing to be in. We’re trying to figure it out,” Tsalyuk said. 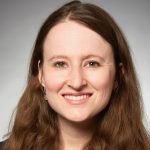 “Until (the school opens) up, it can always change, which is why the restriction isn’t from planned schools. The restriction is from operating schools. With COVID, plans can change.” — Jessica Reuven, Fresno Farms

She didn’t have an estimate on how much she invested, but it was “a lot.”

Tsalyuk wants her location to be grandfathered in and not have to move.

Jessica Reuven, Tsalyuk’s partner in Fresno Farms, said it was “not part of our intention… to be near a school.”

“We’re really concerned about it. We are still kind of working through what that means for us and what our plan is for Fresno,” Reuven said. “It’s unfortunate that we’re now in this position. If the city of Fresno gave us the opportunity, we would transfer locations in a heartbeat right now because it was never our intent to operate in a school and it wasn’t identified during the zoning process.”

“Until (the school opens) up, it can always change, which is why the restriction isn’t from planned schools. The restriction is from operating schools. With COVID, plans can change,” Reuven said.

The ordinance’s language, though, does not differentiate between a planned school or one that is already open.

City Map Does Not Show School 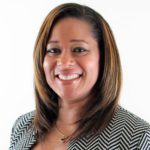 “I’m very upset because it seems that people try to take advantage of areas that are low income to see how much they can get away with.” — Fresno Unified Trustee Keshia Thomas

Language in the city’s cannabis ordinance does not specifically address a situation when a school is built after a cannabis license is awarded.

In the same section of the municipal code, language is specific that the 800 foot buffer zone between a cannabis business and youth centers or day care centers apply if they are “in existence at the time a complete commercial cannabis business permit application is submitted.”

In the city’s map showing buffer zones around proposed retailers, it does not designate the future Farber campus as a school zone. 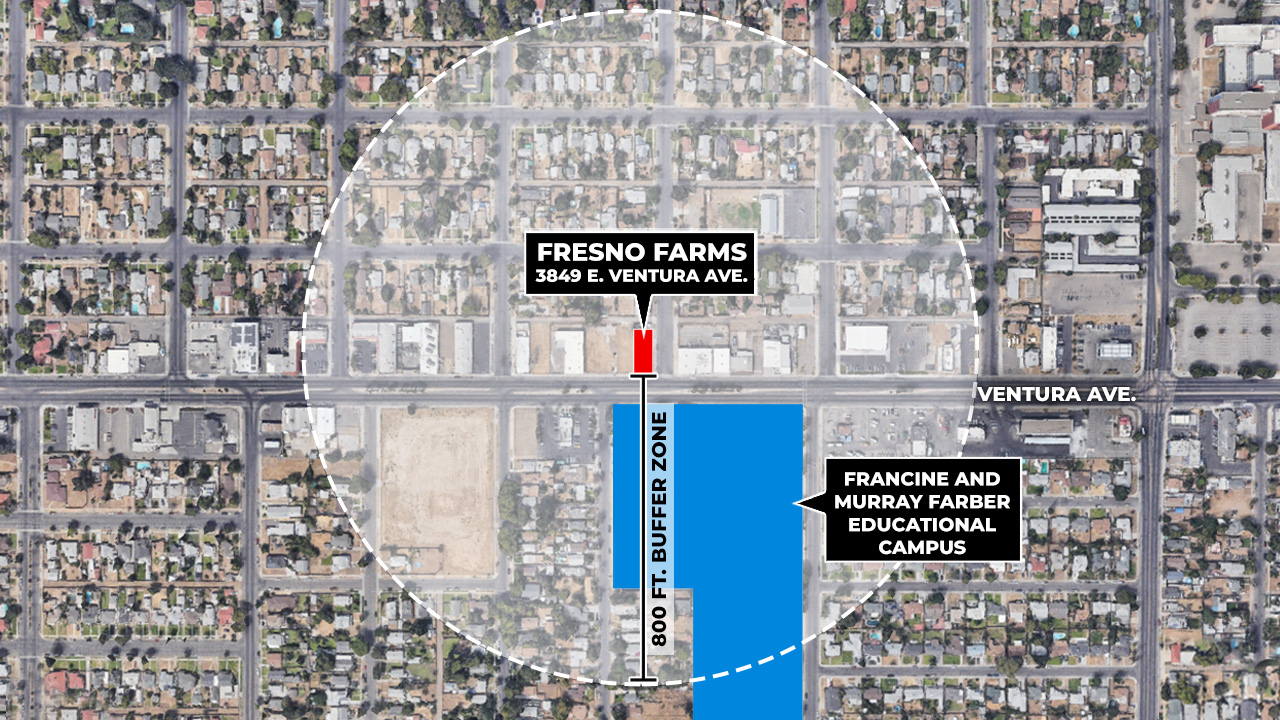 After Fresno Farms turned in its application, the city replied with a Dec. 4, 2020 letter confirming they were properly zoned.

A search of city of Fresno planning records show that Fresno Unified applied for permits for the Farber site dating back to at least April 2020.

“I am very cautious to put blame on the city on this in particular because I think it’s one of those things that because (the school is) not built out. It’s very hard to plan for something like that,” Reuven said. “I don’t think the city was malicious or grossly negligent in doing this. I think it’s kind of just an unfortunate circumstance.”

City officials did not respond to GV Wire’s request for comment. Thomas is strongly opposed to the Fresno Farms license.

“I’m very upset because it seems that people try to take advantage of areas that are low income to see how much they can get away with. And it’s bad enough that we’re trying to keep our kids safe and free of drugs or bad influences. But they want to put one right in the neck of the woods where they basically walk down the street and get whatever they need.”

Thomas plans to contact city councilmembers to express her concern.

The Fresno Farms and Farber school location is near the trustee voting areas of Thomas and Elizabeth Jonasson Rosas. Rosas declined to comment on the record. She is married to the Fresno city councilman for the area, Luis Chavez.

Councilman Could Have Appealed

Chavez had the opportunity to appeal the awarding of the Fresno Farms license, but he did not do so. He told GV Wire he could not offer an explanation on advice of the city attorney.

“I would hope that he would appeal it and get rid of it. This is just not good for kids,” Thomas said.

Three other councilmembers appealed a total of five retail locations. Councilman Mike Karbassi said he was concerned with the 800 foot buffer zone between the Lemonnade cannabis shop and Pinedale Elementary school in District 2.