Just a few years from now, the site of Fresno County’s infamous old juvenile hall will be transformed into Fresno Unified’s newest campus that will look like no other in the area. And it seemingly will have something for just about everybody.

The 12.8-acre site at the southwest corner of Ventura Avenue and 10th Street in southeast Fresno will be the new home for students now attending alternative education programs at Cambridge Continuation High School, J.E. Young Academic Center, and the eLearn Center. Students with kids of their own will be able to bring them to an early education classroom, while taking their own courses on campus.

Classes will be in the morning, afternoon, and evening hours to accommodate students’ schedules. They will include an impressive expansion of career technical education pathways, such as distribution and warehousing and event management and hospitality. In addition, there is talk of including dual enrollment classes, where high schoolers enroll in college-level courses, saving them college tuition and fee costs down the road.

And for the first time, Cambridge and J.E. Young students will have access to an on-site school library.

The campus also will include a Student Union where students and others can grab meals, and spaces will be available for community meetings for parent groups and others. Another advantage for parents — no more scrambling for a parking place downtown. The district will move several departments, including special education and the Department of Prevention and Intervention, which focuses on attendance and preventing dropouts, to the new campus.

There will be ample side street and off-street parking, and the site is on the city’s Bus Rapid Transit line.

There also will be spaces devoted for parent and community meetings, which parent Carmen Zamora was excited to hear about.

“As a parent and advocate I’m always appreciative of another space where community meetings can be held, when it’s safe to do so of course,” said Zamora, a senior manager with GO Public Schools Fresno. “I’m looking forward to learning more about the space, and being able to visit when it’s complete and we’re cleared to be in-person.”

For now the site is known as the Campus at V-10, but an official naming is scheduling to come later this year. Back in 2018 when the district purchased the closed juvenile hall site from the county, the unofficial name was the Urban Academy.

But the site had another, darker name in the past. The juvenile hall had been labeled the “Hall of Shame” in a Fresno Bee investigation 20 years ago that uncovered unsafe and even barbaric conditions there. The reporting prompted county officials to build a new, up-to-date Juvenile Justice Center on American Avenue southwest of Fresno and close the old hall.

Fresno Unified trustees got their first look last month at the designs and plans for the $60 million project that includes the Academic and Student Union buildings.

The site map shows the entrance to the two-story Academic Building placed on 10th Street rather than busy Ventura Avenue, said Yolanda Jimenez-Ruiz, the district’s alternative education administrator. The second building is the Student Union that contains a 350-seat cafeteria. The rest of the campus is mapped out with parking and landscaping, including a quad between the two buildings and room for future growth, she said.

A fly-through animation provided by the architect, SIM-PBK, shows an airy atrium and a curved reception desk in the lobby area of the Academic Building. The video shows a designated space for an expandable Parent Center. Jimenez-Ruiz said the building will contain spaces for counselors, social workers, nurses, the early learning center and an exercise gym.

Upstairs, students will find a seating area outside the library, which will have movable seating and stacks, rooms designated for student council and club meetings, and spaces for student projects to be displayed, she said.

Jimenez-Ruiz said the campus is designed to meet the needs of more than 1,200 students.

Only a limited number of career technical education pathways have been available at the Cambridge continuation school in southeast Fresno. That’s going to change at the V-10 campus, which includes a classroom where students will learn how to drive forklifts, including behind-the-wheel training, in the warehousing and distribution pathway.

To say trustees were thrilled by the V-10 presentation would be an understatement.

“You had me at lobby. Oh, my God. It’s so concierge-type looking,” board president Valerie Davis said. “This is not us — this is the new us. The student union? That’s collegiate. Wow. And the library. Oh my gosh.

“I’m moved, I’m moved. Those schools have never had libraries. And this is going to rock their world, and they deserve this.”

According to the district timeline, plans for the campus are being finalized this month before the project is forwarded to the State Architect for review. Meanwhile, the campus naming will occur this spring.

If the project stays on track, trustees could be voting on the construction bid award by next fall, and the campus could be open for classes by August 2023. 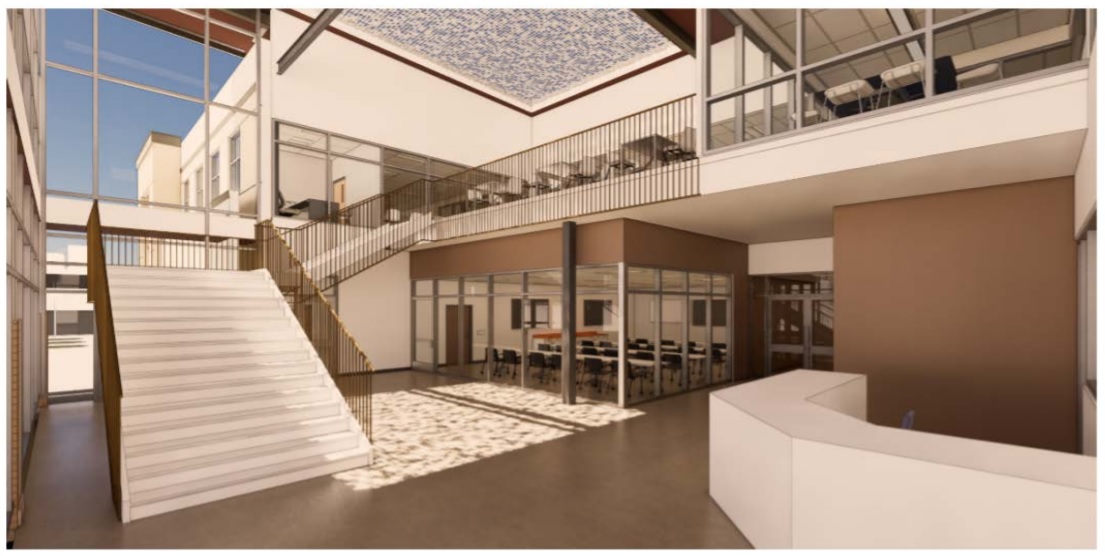 The entrance of the V-10 academic building. (Fresno Unified)

Trustee Elizabeth Jonasson Rosas, whose Roosevelt High Area includes the V-10 campus, told GV Wire℠ that she is especially excited about how many more options will be available for alternate education students whose options in the past have been limited.

Some people believed that because the students were in continuation education programs, “maybe they didn’t need these opportunities,” she said.

But attitudes about alternative education have shifted as policymakers and educators realized that students, whose challenges may be social-emotional, financial, or even parenthood, can still thrive and prepare for college and career if they have the right support, said Jerry Abrica, president of the California Continuation Education Association Plus and a math teacher at Citrus High School in Porterville.

But with limited district resources, such programs are often “squeezed in” at existing facilities that might not have room for a library, or they wind up on the outskirts of town, Abrico said.

“That’s a signal to the kids, ‘I’m on the fringes, I’m an outsider,’ ” he said. “But when a school district decides to invest in this sector, it sends a strong message to the community, county, and state, that Fresno is interested in serving the entire student population.”

Preparing Students for Career and College

Students following the pathways will have the option of getting a certificate or internship that could lead to employment, or moving on to post-secondary education at a college or university.

No matter which direction they choose, students will be prepared for good-paying jobs, Jonasson Rosas said.

And the V-10 campus could become a school of choice for students at Fresno Unified’s comprehensive high schools who want access to the career pathways offered there, she said.

It’s also signals a rebirth for the site and the neighborhood, which was weighed down by the derelict juvenile hall and the reminders of the lost opportunities for those who passed through it.

That in itself is significant, Abrico said: “What great symbolism — before, it was just a place to hold them, now it’s a place for them to grow.”