Bulldogs Move Into Top 25 With Last-Second Win Over UCLA 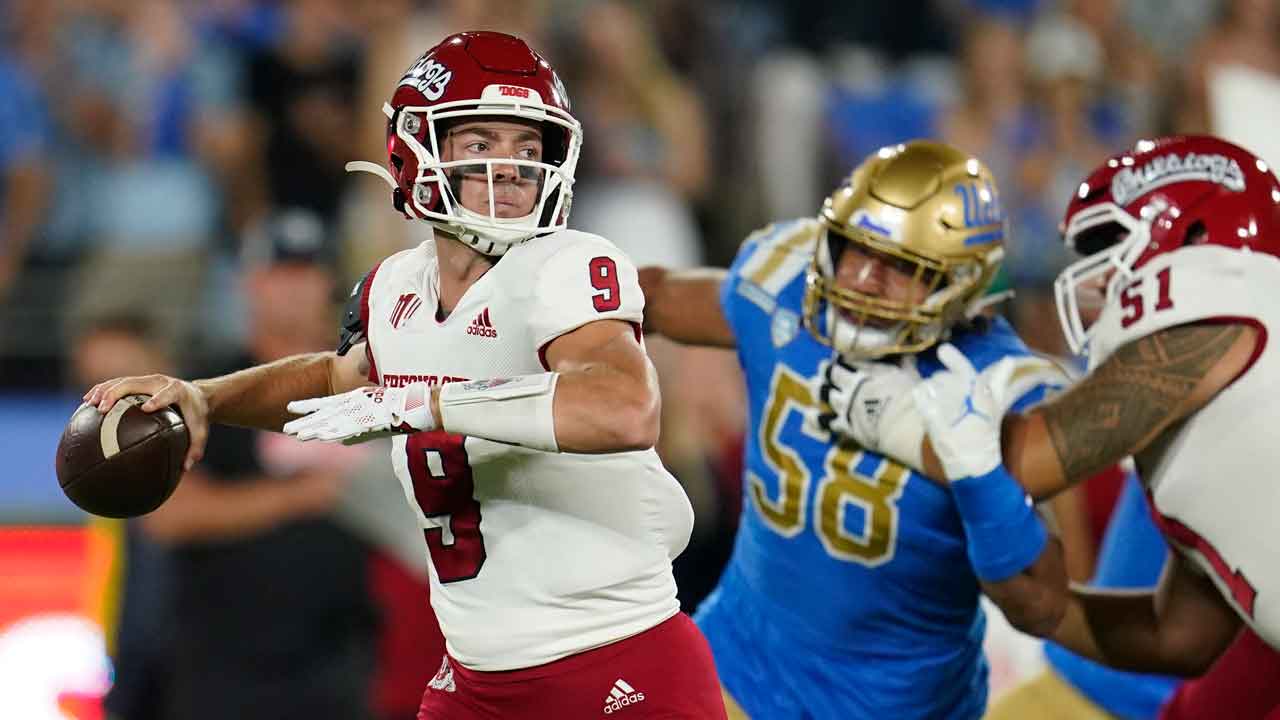 Fresno State quarterback Jake Haener looks for a receiver in the team's win over UCLA. on Saturday. (AP/Marcio Jose Sanchez)
Share with friends

Jake Haener transferred out of Washington to Fresno State and turned into a Pac-12 killer, as well as the driving force in the Bulldogs’ return to the Top 25.

The Bulldogs quarterback engineered two late touchdown drives to upset then No. 13 UCLA and turn Pac-12 After Dark into a debacle for the West’s Coast Power Five conference.

With a pulsating 40-37 comeback victory on Saturday night at the Rose Bowl, Fresno State is nationally ranked in both the Associated Press poll of college football programs and the USA Today-AFCA Coaches Poll for the first time since 2018.

If you’ll recall, the Bulldogs ended the 2018 campaign under Jeff Tedford with a program-record 12 victories, two victories over Pac-12 teams (UCLA, Arizona State), a Mountain West title, a Las Vegas Bowl title, and the program’s first victory at arch-rival Boise State since the Broncos became a major-college program.

And, a final No. 18 ranking in the AP and coaches polls.

The 3-1 Bulldogs, whose only loss was at now third-ranked Oregon, landed at the No. 22 spot in the AP poll on Sunday.

It was Fresno State’s fourth-straight victory over UCLA, which got the attention of former Fresno State quarterback Derek Carr.

Derek Carr: Why Aren’t Bulldogs in the Pac-12?

After the Las Vegas Raiders defeated the Pittsburgh Steelers on Sunday, Carr noted the game result during a postgame news conference.

“If you’re a kid and you want to play college football in California, I’d pick – what we beat UCLA like four times in a row,” the Raiders’ signal-caller said. “How are we not in the Pac-12?”

San Diego State, which is one of Fresno State’s top Mountain West Conference rivals,  beat the Pac-12’s Utah in three overtimes on Saturday.

The Pac-12 is 16-16 in non-conference games, including three losses to BYU, five against Mountain West teams and two to FCS schools.

Next up for Bulldogs

Fresno State will host winless UNLV (0-3) on Friday night in its Mountain West opener. The Bulldogs are favored by more than four touchdowns.