Community Comes Together to Commemorate 20th Anniversary of 9/11 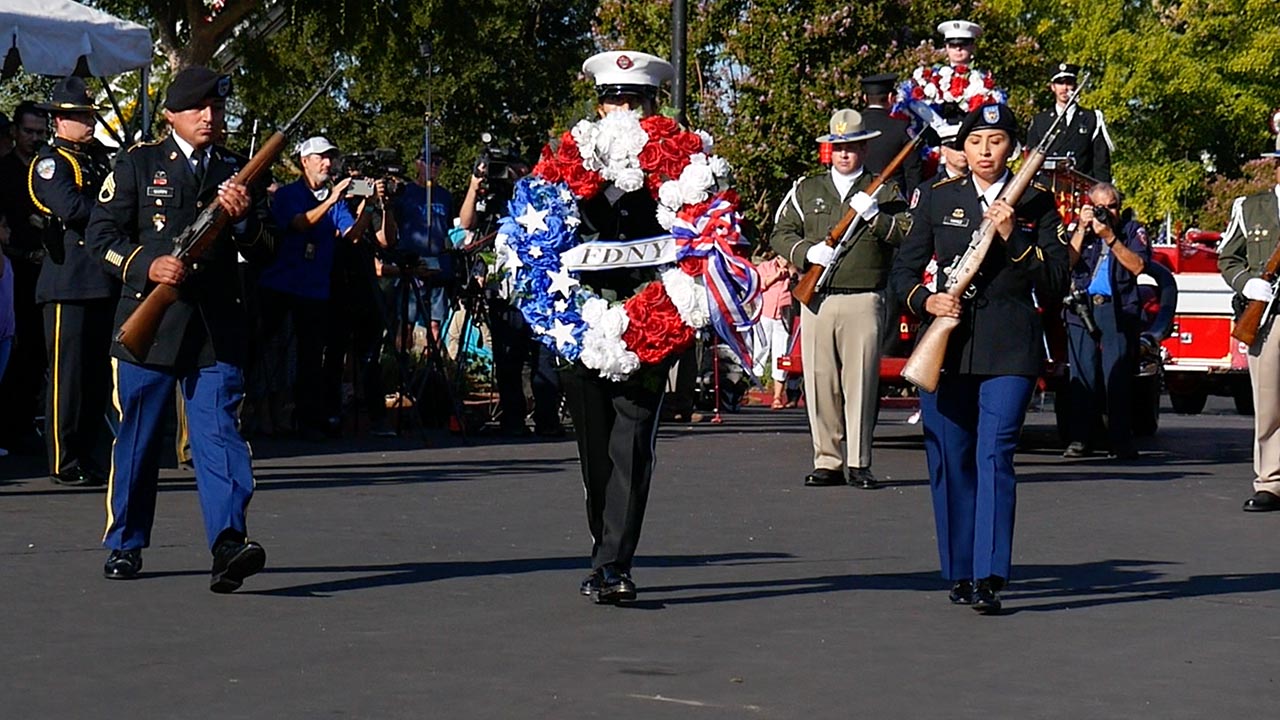 The California 9/11 Memorial in Clovis commemorated the 20th anniversary of the 2001 terrorist attacks that shocked the nation. (GV Wire/ Jahziel Tello)
Share with friends

On a day to reflect and remember, community members gathered together at the California 9/11 Memorial early Saturday morning to pay tribute to those who lost their lives on Sep. 11, 2001.

Local first responders, firefighters, law enforcement officers, and military personnel stood at attention, in full composure, marching in line to the tune of bagpipes, drums and choirs in honor of the 20th anniversary of the Sep. 11 attacks.

In moments of silence, the ceremony was preceded with the first radio dispatch calls of that dreadful day followed by firefighter sirens, and the lowering of the flag, ending with a rendition of the Star Spangled Banner by ABC 30 news anchor, Margot Kim.

Retired firefighter Andy Isolano, who served in a Brooklyn firehouse unit and is now a resident of the Central Valley, recalled in vivid detail the day in which he lost 13 of his firefighter friends. 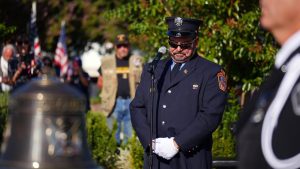 NY firefighter who witnessed his closest friends pass away remembers the fallen on the 20th anniversary of the Sep. 11 attacks. (GV Wire/Jahziel Tello)

He had just gotten off a 24 hour work day and witnessed the second plane hit, not long after which — along with another firefighter colleague ending the night shift — headed back in to help.

“We pulled up to lower Manhattan in an area that we’d been in dozens of times, for many calls unrecognizable to this day, not sure where we parked the rig,” said Isolano.

With calls of mayday, mayday, tower one came crumbling down and as the smoke cleared, Isolano lost 13 of his closest friends – 343 fellow firefighters and nearly 3,000 people were dead.

In continuing to honor and remember the lives lost on that day, Fresno organizers and leaders have made sure to continue the process of educating young people who no longer easily remember — or were not yet born — to talk about that day.

Benham-Lewis coordinates student events by organizing scholarship competitions for students grades 7-12 who compete through poetry and art contests with the goal of capturing the impacts of Sep. 11.

Maya Alcala, a 16-year old Clovis East High School student, participated in the art contest placing in the top three by contributing an art piece representing the twin towers falling and adding the names of all the victims written in black ink.

Alcala, who was not yet born when the towers collapsed, worked on her art project for 40 hours, and at times became emotional from writing all the names down.

“My mom tells me that she was at work, and everyone was watching the tv, and she still gets emotional about it still – my dad as well,” said Alcala. “When I was writing the names, I was like, wow that many people died?”

New monuments have continued to be added in the last few years after efforts by organizers to further “honor, educate, and remember.”

2019 saw the addition of a 1/100th scale replica of the Twin Towers, and a life sized bronze statue of firefighters “answering the call.” 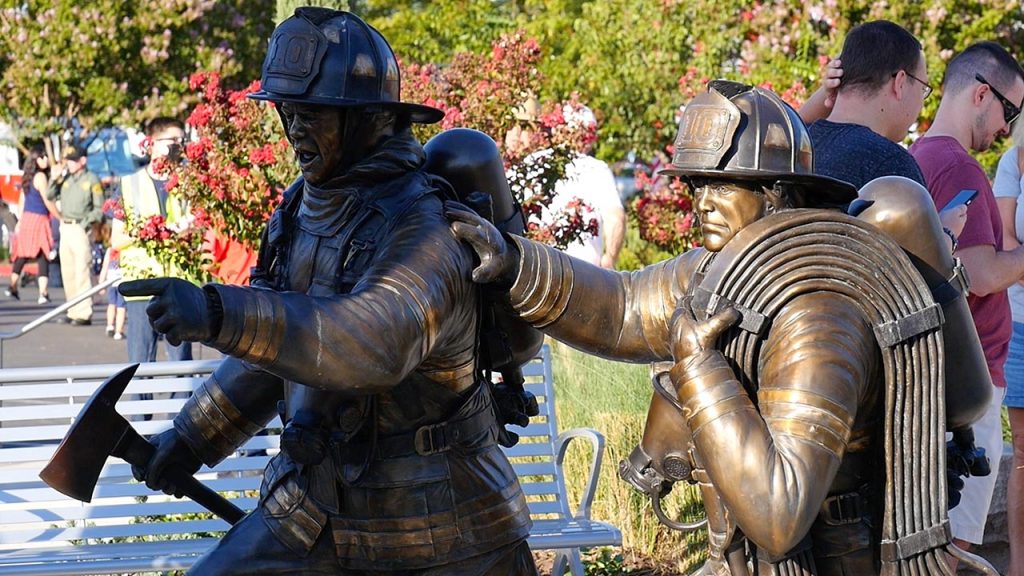 A bronze statue of firefighters “answering the call” on 9/11 at the California 9/11 Memorial. (GV Wire/ Jahziel Tello)

For 2020, the memorial planted a sapling from the Survivor Tree located at “Ground Zero.”

For this year, the memorial continued the expansion of the flight 93 monument, and three additional bronze statues representing a wounded warrior, the first female respondent, and a marine holding a folded flag. 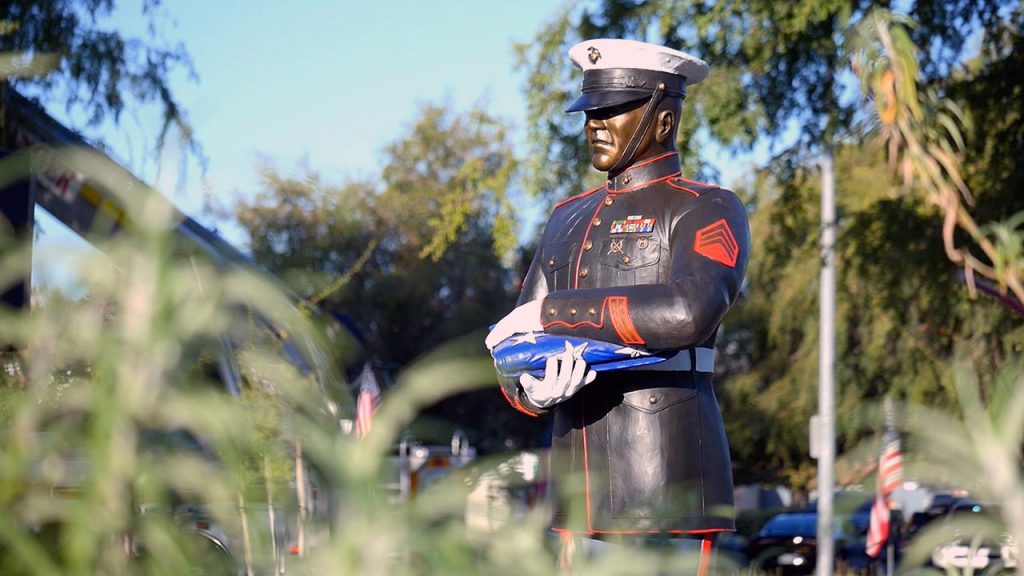 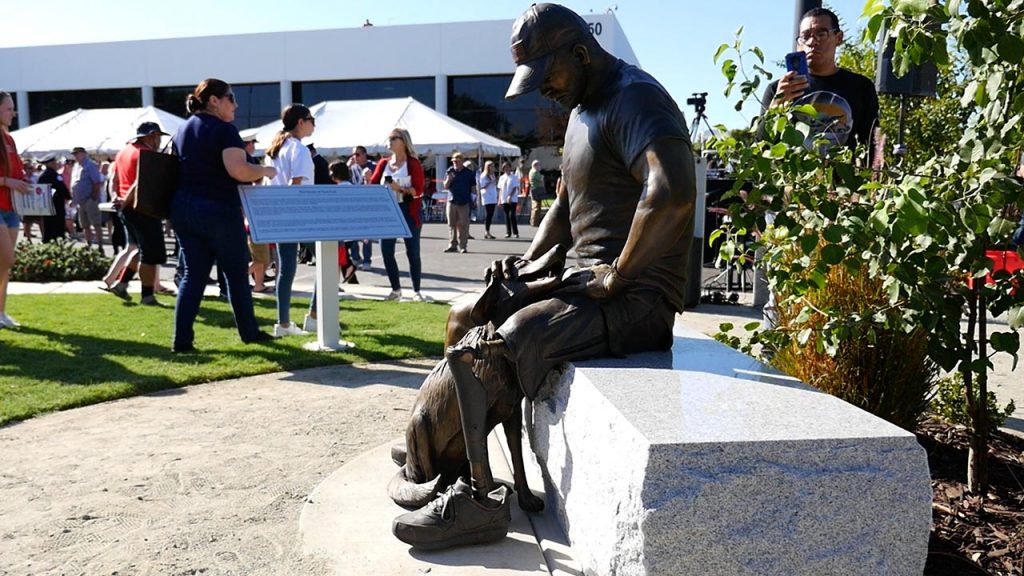 Bronze statue of a wounded warrior at the California 9/11 Memorial. (GV Wire/Jahziel Tello)