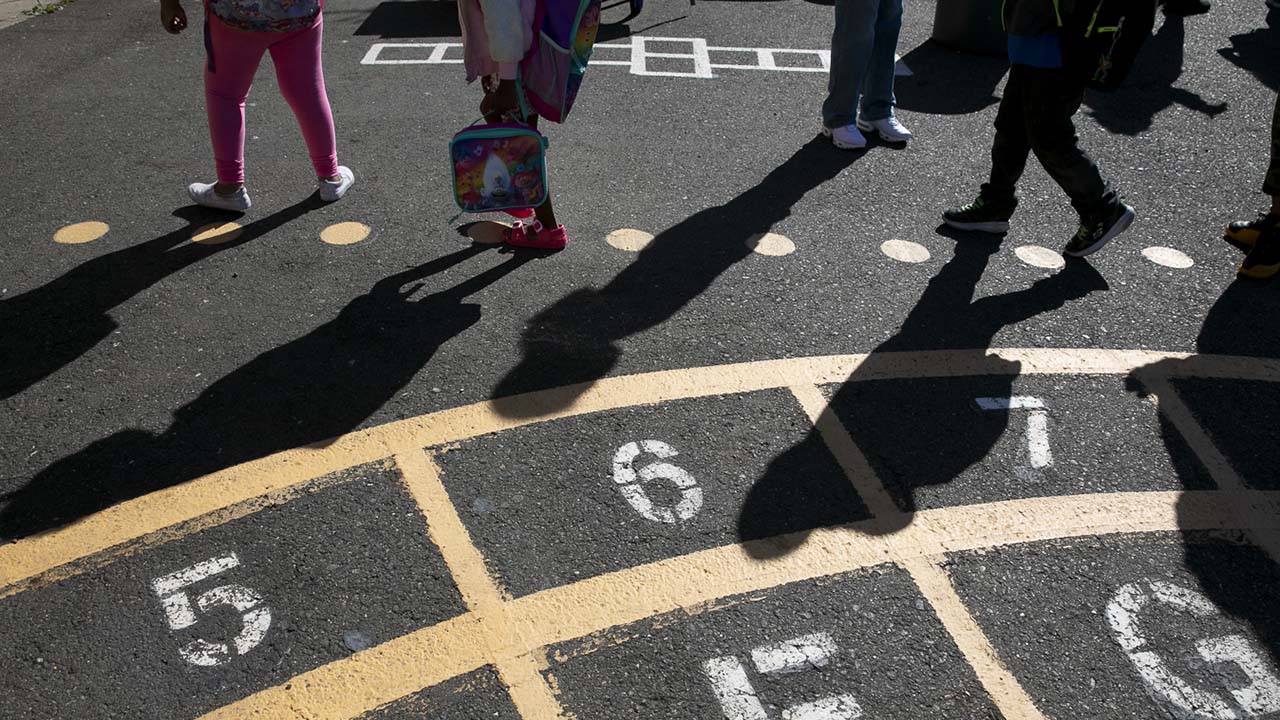 A substitute teacher shortage is causing administrators to take desperate steps amid teacher absences due to Covid-related quarantines. (CalMatters/Anne Wernikoff)
Share with friends

The school, about 60 miles northeast of Sacramento, has 86 teachers. Thirteen were out on Monday.

“We have quite a few teachers out either because they’ve tested positive, they’re symptomatic, or they have their own children who are in quarantine,” she said. “At the end of the day, we just don’t have enough substitutes.”

Across California, the substitute teacher shortage is another burden in an already challenging school year. Administrators are taking desperate steps to make sure there’s an adult in the classroom when teachers are absent, resorting to using non-teaching staff who have their own critical responsibilities during the typical school day, especially during the first fully in-person school year of the pandemic.

Nevada Union High and the rest of the Nevada Joint Union High School District share a pool of substitute teachers with eight other districts in Nevada County. Last year, the pool was stretched so thin that Nevada Joint Union shut down schools due to a sub shortage. District officials are worried it’ll happen again.

“Last October, we had to go back to distance learning because I ran out of substitutes,” said Brett McFadden, superintendent of Nevada Joint Union High. “Not because we didn’t have enough protective equipment. I ran out of adults.”

McFadden said even he has had to sub for a class.

According to County Superintendent Scott Lay, the county went from having about 200 substitute teachers before the pandemic to less than 70 today. As a result, principals like Rhoden are forced to place counselors and administrators in classrooms. Even then, Rhoden fell short three substitutes on Monday.

The substitute shortage is worsened by an underlying teacher shortage. Several district officials interviewed by CalMatters said they started the school year with some classrooms being assigned a long-term substitute.

“You get to a point where you’re just begging and borrowing people from all over the district,” McFadden said. “I love my students dearly, but I’m not gonna leave 30 of them alone in a room.”

How Bad is the Sub Shortage?

Prospective substitute teachers need to hold a bachelor’s degree and meet the “basic skills requirement” either by providing a standardized test score or by having B’s or better in college-level reading, writing and mathematics courses.

“It’s not terrifically challenging to get a sub permit in California,” said Mary Sandy, the executive director of the Commission on Teacher Credentialing. “But the need is utterly critical.”

At San Bernardino City Unified, the number of substitutes at the district’s disposal shrank from 1,000 before the pandemic to 700.

Marcus Funchess, who oversees human resources for the district, said only about 92% of teacher absences are covered each day.

“Right now our substitute teacher shortage is a concern due to the number of teachers who might need to quarantine,” he said. “On one day we could have up to 45 jobs uncovered.”

Why is the Substitute Teacher Force Shrinking?

Aaron Estrada, a substitute in the Chula Vista Elementary School District, said many substitutes left the profession last year because the pay wasn’t worth the risk of being surrounded by unvaccinated students and staff.

“It’s difficult to try to make a living off substitute teaching,” he said. “For a lot of people, it didn’t seem worth it.”

Some school districts, especially those in rural communities, rely heavily on retired teachers to work as substitutes. But for those older educators, the risk of returning to the classroom is even greater.

“Retirees have their own fears,” said Rhoden, the principal at Nevada Union High. “They want to keep their own health at the forefront.”

Mike Teng, CEO of Swing Education, a company that helps over 200 school districts find substitute teachers, said the sub shortage is consistent with staff shortages in the service sector.

“It’s tough. Substitute teachers have left and haven’t come back,” he said. “And we’re potentially trying to compete with all the other industries for workers.”

“At one point we were only filling about half of teacher absences,” she said. “That’s pretty much unheard of.”

In an effort to entice substitute teachers back into the classroom, the administration at the Chula Vista Elementary School District held an emergency meeting in early August to increase pay for subs.

The district increased pay for short-term subs from $122 to $200 a day. For long-term substitutes, the pay went from $180 to $283 a day. In response, the neighboring Sweetwater Union High School District increased its rate from $160 to $240 a day.

“Some other states don’t require a bachelor’s degree to be a substitute teacher. It’s worth a discussion here.”

Elk Grove Unified has proposed raising its substitute pay rates, especially for current and retired teachers and counselors. These substitutes could make $350 a day, once the district’s school board approves the raises.

At San Bernardino City Unified, the district gave substitutes a 2% raise and paid $12,000 for digital billboards to advertise its substitute positions on the freeways. Funchess said the district would increase pay if this aggressive advertising campaign doesn’t attract enough substitutes.

Apart from raising pay, district leaders said the Commission for Teacher Credentialing could take steps to remove other barriers like the $100 fee and the requirement for a bachelor’s degree.

“We could use any temporary reprieve,” Funchess said. “Some other states don’t require a bachelor’s degree to be a substitute teacher. It’s worth a discussion here.”

A Sub Shortage on Top of a Teacher Shortage

The substitute shortage is just a symptom of an ongoing teacher shortage, according to district administrators. Because some districts across the state started the school year with unfilled teaching positions, some students have only had a substitute teacher in the weeks since school started.

In the 2020-21 school year, 13,558 of California’s teachers retired, 1,000 more than the previous year, according to data from the California State Teachers’ Retirement System.

Mary Sandy at the Commission on Teacher Credentialing said the agency must credential about 20,000 teachers a year to keep up with the staffing needs of districts across the state. Last year, only about 14,000 teachers received their credentials.

“I don’t know if another pay raise would work to be honest. I just don’t think there’s enough teachers out there.”

And while this year’s state budget includes a historic amount of funding for California’s schools, no amount of money can overcome the bottom line of a personnel shortage.

At Nevada Joint Union High School District, Superintendent Brett McFadden said despite raising the daily rate from $100 to $150 per day, finding substitutes continues to be a challenge especially in more rural and remote parts of the county.

“I don’t have a money problem,” he said. “I have a resource problem.”

Until district and state officials find more effective ways to recruit qualified teachers, principals like Rhoden will start their days rushing to put an adult in every classroom.

“I don’t know if another pay raise would work to be honest,” Rhoden said. “I just don’t think there’s enough teachers out there.”

Joe is the K-12 education reporter for CalMatters. His stories use data to highlight inequities in California’s public schools. He has a bachelor’s degree in comparative literature from the University of California, Irvine, and a master’s degree from Columbia Journalism School.

That Student in Your College Class Could Be a Scam Bot

Newsom Stimulus Left out Many Retirees, Vets, Disabled. Will They Vote to Recall Him?