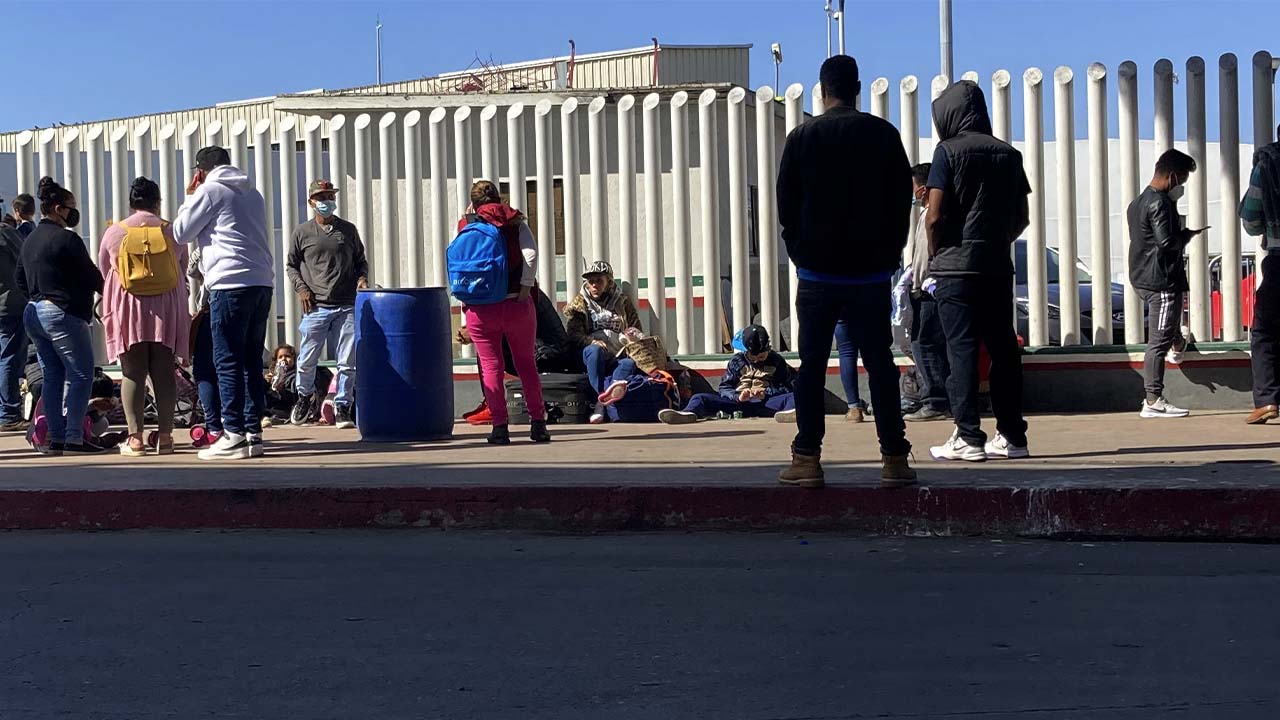 Migrants waiting to cross into the United States wait for news at the border crossing in Tijuana, Mexico. (AP Photo/Elliot Spagat)
Share with friends

WASHINGTON — The Supreme Court on Tuesday said the Biden administration likely violated federal law in trying to end a Trump-era program that forces people to wait in Mexico while seeking asylum in the U.S.

With three liberal justices in dissent, the high court refused to block a lower court ruling ordering the administration to reinstate the program informally known as Remain in Mexico.

It’s not clear how many people will be affected and how quickly. Under the lower court ruling, the administration must make a “good faith effort” to restart the program.

There also is nothing preventing the administration from trying again to end the program, formally called Migrant Protection Protocols.

A federal judge in Texas had previously ordered that the program be reinstated last week. Both he and the 5th U.S. Circuit Court of Appeals refused the administration’s request to put the ruling on hold.

Justice Samuel Alito ordered a brief delay to allow the full court time to consider the administration’s appeal to keep the ruling on hold while the case continues to make its way through the courts.

The 5th Circuit ordered expedited consideration of the administration’s appeal.

The court offered little explanation for its action, although it cited its opinion from last year rejecting the Trump administration’s effort to end another immigration program, Deferred Action for Childhood Arrivals. In that case, the court held that the decision to end DACA was “arbitrary and capricious,” in violation of federal law.

The administration has “failed to show a likelihood of success on the claim that the memorandum rescinding the Migrant Protection Protocols was not arbitrary and capricious,” the court wrote Tuesday in an unsigned order.

The three dissenting justices, Stephen Breyer, Elena Kagan and Sonia Sotomayor, did not write an opinion expressing their views of the case.

In a statement, the Department of Homeland Security said it regrets that the high court declined to issue a stay. The department said it would continue to challenge the district court’s order.

The American Civil Liberties Union called on the administration to present a fuller rationale for ending Remain in Mexico that could withstand court scrutiny.

“The government must take all steps available to fully end this illegal program, including by re-terminating it with a fuller explanation. What it must not do is use this decision as cover for abandoning its commitment to restore a fair asylum system,” said Omar Jadwat, director of the ACLU’s immigrant rights project.

During Donald Trump’s presidency, the policy required tens of thousands of migrants seeking asylum in the U.S. to turn back to Mexico. It was meant to discourage asylum seekers but critics said it denied people the legal right to seek protection in the U.S. and forced them to wait in dangerous Mexican border cities.

The judge, U.S. District Judge Judge Matthew J. Kacsmaryk in Amarillo, Texas, ordered that the program be reinstated in response to a lawsuit filed by the states of Texas and Missouri, whose governors have been seeking to reinstate some of the hard-line anti-immigration policies of the Trump administration.

The Biden administration argued in briefs that the president has “clear authority to determine immigration policy” and that Homeland Security Secretary Alejandro Mayorkas had discretion in deciding whether to return asylum seekers to Mexico.

The policy has been dormant for more than a year and the administration argued that abruptly reinstating it “would prejudice the United States’ relations with vital regional partners, severely disrupt its operations at the southern border, and threaten to create a diplomatic and humanitarian crisis.”

The Trump administration largely stopped using the “Remain in Mexico” policy at the start of the pandemic, at which point it began turning back virtually everyone crossing the Southwest border under a different protocol — a public health order that remains in effect.

President Joe Biden suspended the program on his first day of office and the Homeland Security Department ended it in June.

At the high court, at least five of the six conservative justices, including three Trump appointees, voted for the restart of the program. Under the court’s opaque treatment of emergency appeals, the justices don’t always say publicly how they voted.