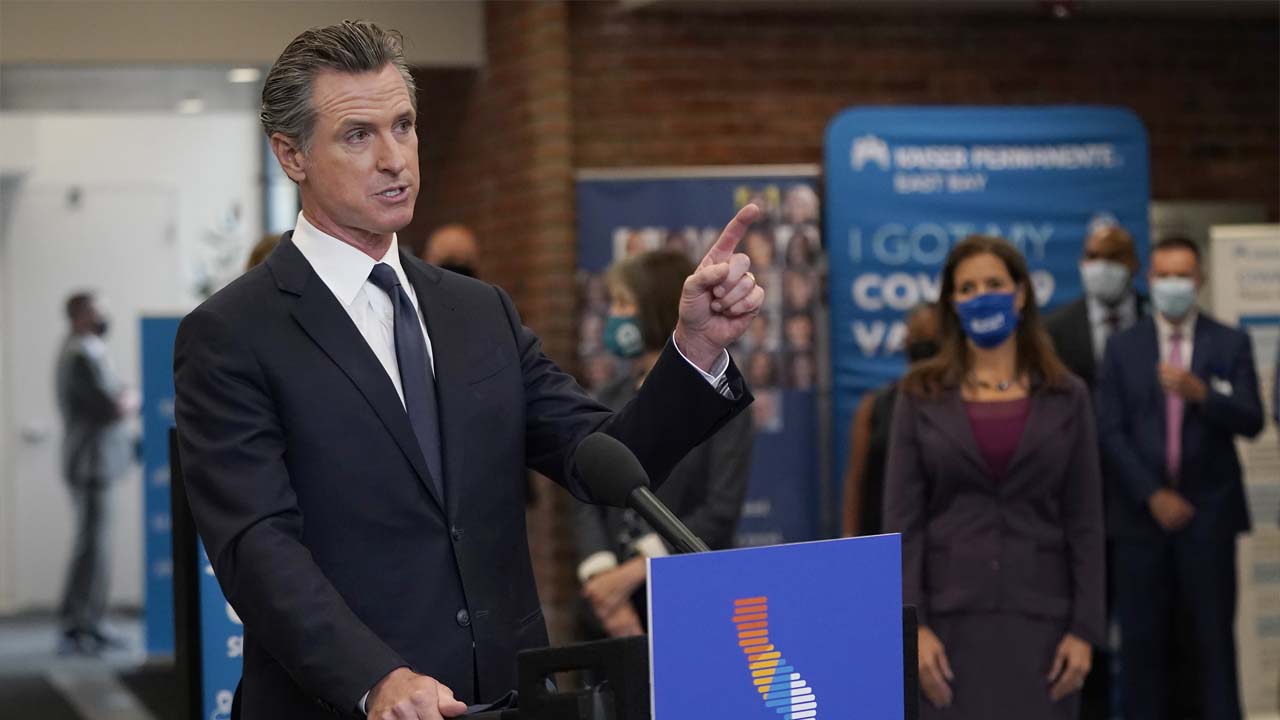 Making a fresh push for vaccinations as coronavirus cases climb in California, Gov. Gavin Newsom turned political as he announced new requirements for state workers and health care employees to show proof of vaccination, blaming “right wing” politicians and media for perpetuating misinformation about the shots.

Newsom’s comments veered far from his steadfast statements throughout the COVID-19 crisis, during which he’s batted away questions about pandemic politics and often passed on opportunities to criticize Republicans.

The new approach comes against the backdrop of a September recall election seeking to oust Newsom, fueled by anger over his response to the pandemic.

Newsom’s frustrations flashed as he announced he will require state employees and millions of health care workers, public and private, to show proof of vaccination or be regularly tested, a policy in line with a growing number of Democratic-run cities.

After Newsom mentioned Greene repeatedly, she responded by calling him a “communist dictator” on Twitter. In his response, he accused her of “literally killing Americans” by spreading misinformation. Greene has compared vaccination and mask mandates to the Holocaust and was suspended from Twitter for 12 hours last week after spreading vaccine misinformation. On Sunday night, she likened decisions by business owners to exclude unvaccinated customers to “segregation.”

Monday’s announcement allows Newsom to take a clear step aimed at boosting the vaccination rate while avoiding imposing broader mandates and restrictions that could further frustrate voters. His political comments appeared aimed at motivating his Democratic base by linking the recall to what he calls extremist Republicans.

In California, Democrats outnumber Republicans by nearly 2-to-1 and one of Newsom’s strategies has been to nationalize the race.

“Anything he can do to emphasize who’s behind this and who’s attacking him is all for his own political good,” said Garry South, a Democratic strategist who worked for former Gov. Gray Davis, who got recalled in 2003.

Rob Stutzman, a Republican strategist who worked opposite South in the 2003 recall, agreed that such sparring only benefits Newsom in the heavily Democratic state.

“Newsom needs to inject some intensity into his base,” he noted on Twitter.

Infections and Hospitalizations Rise With Many Still Unvaccinated

Under the new rules, employees who do not provide verification of vaccination must submit to testing once or twice a week and wear a mask while working. Vaccine verification also will be required in jails, homeless shelters and other places where people congregate, Newsom said. It’s not clear who will pay for the tests.

While about 62% of all eligible Californians are fully vaccinated, the state has struggled to make significant progress in recent weeks. Infections and hospitalizations are rising, with the delta variant now making up an estimated 80% of cases in California, though the growing numbers are still far below the winter peak.

“An individual’s choice not to get vaccinated is now impacting the rest of us in a profound and devastating and deadly way,” Newsom said.

While many of people who have not yet been vaccinated are merely hesitant, political sparring may not persuade more of an effort to get the shots.

A poll from The Associated Press-NORC Center for Public Affairs Research released last week found 43% of Republicans said they had not been vaccinated or definitely wouldn’t be compared to 10% of Democrats. It was taken before some Republicans and cable news personalities began urging vaccination last week.

“He’s really showing leadership to strengthen the case for vaccination, which the entire country is trying to make,” said Dr. Monica Gandhi, an infectious diseases professor at the University of California, San Francisco.

Newsom has been hesitant to reimpose requirements on masks or social distancing since he allowed the state to reopen on June 15. Meanwhile, counties have forged ahead. Los Angeles County, home to a quarter of the state’s population, is again requiring masks for people in indoor settings, and several other counties have encouraged it.

Dozens of national health care organizations released a letter Monday pleading with health care and long-term care home employers to mandate employee vaccinations. The San Francisco Bar Owner Alliance said it will recommend its hundreds of members check for proof of vaccination or a recent negative COVID-19 test result before allowing guests inside.