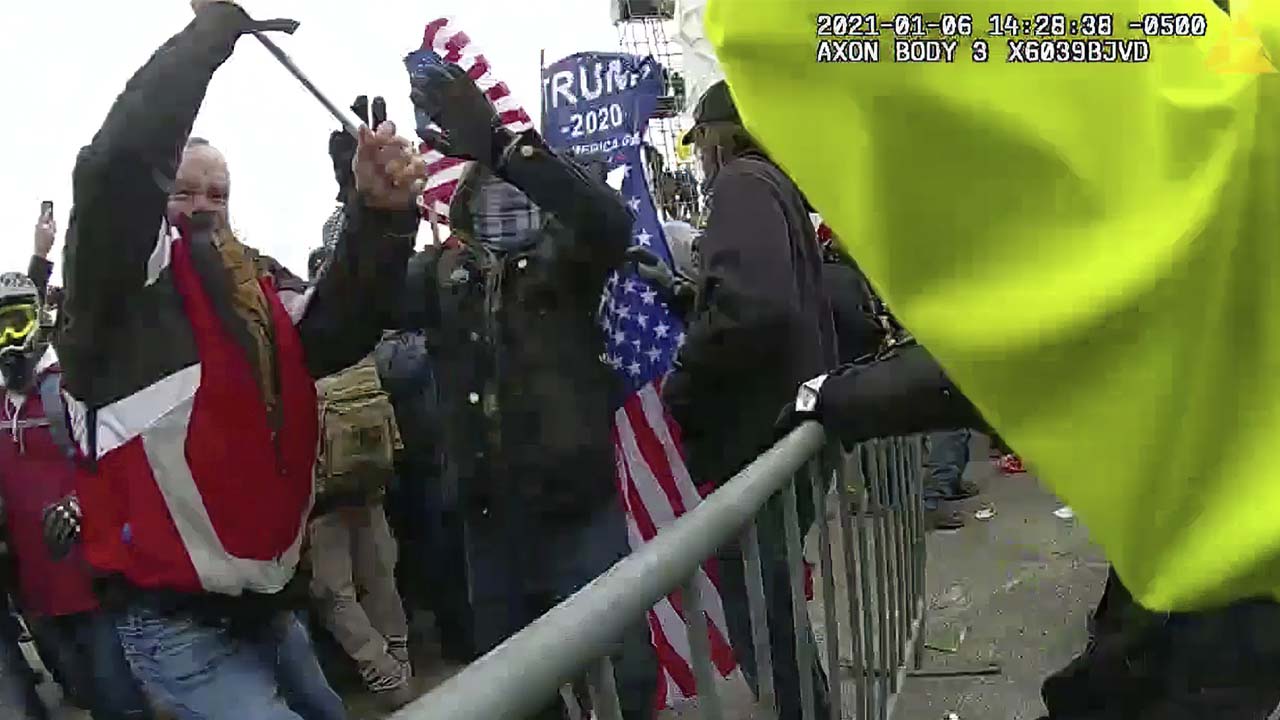 Videos released under court order provide a chilling new look at the chaos at the U.S. Capitol on Jan. 6, including body camera footage that shows a man charging at a police officer with a flagpole and tackling him to the ground.

Federal judges ordered the release of the videos after media organizations, including The Associated Press, went to court to request that the Department of Justice provide access. The videos are being presented as evidence in prosecutors’ cases against three men charged with assaulting police.

The new videos show a Marine Corps veteran and former New York City police officer wielding a flagpole as he attacks police, as well as rioters crushing another officer into a door as he screams in pain. Still another video shows a New Jersey man punching an officer in the head.

The release comes at a time when Republican lawmakers in Washington increasingly try to downplay the siege, portraying the breach of the Capitol as a mostly peaceful protest despite the shocking violence that unfolded.

Supporters of former President Donald Trump fought past police lines to storm the building and interrupt the certification of President Joe Biden’s election win over Trump.

Charges Made as Footage Captures Violent Rioters at the Capitol

The Justice Department has brought hundreds of criminal cases against the rioters. This week, a man linked to the antigovernment Three Percenters extremist movement was indicted on a new charge that he brought a semi-automatic handgun with him to the Capitol.

Body camera video released in the case against former New York City policeman Thomas Webster shows the man holding a flagpole and shouting profanities at officers standing behind a metal barricade. Webster pushes the barricade and swings toward an officer with the flagpole. There’s a violent scuffle, the officer manages to take the flagpole away from the man, and Webster appears to tackle the officer to the ground.

Other images in court documents show Webster pinning the officer to the ground and grabbing at his face.

Webster’s lawyer wrote in court documents seeking his release from jail while he awaits trial that his client got upset when he saw police using pepper spray on the crowd. The lawyer, James Monroe, wrote that “as a former U.S. Marine and a member of law enforcement, defendant’s moral instinct was to protect the innocent.”

Monroe said the officer provoked Webster by reaching across the barrier and punching him. The lawyer says Webster never actually struck the officer with the flagpole.

Other footage released in the case against Patrick McCaughey III, a Connecticut man charged with assault, show police wearing helmets and face shields gathered in a Capitol doorway as the crowd pushes aggressively forward and shouts at them.

At one point, Daniel Hodges of Washington’s Metropolitan Police Department gets pinned against a door and a rioter rips off his mask. The mob shouts “heave ho” as it pushes forward. Hodges, whose mouth appears bloody, cries out as he’s crushed between a riot shield and the door. McCaughey at one point points to Hodges and says “he’s hurt,” seemingly trying to alert the other officers. Hodges has recovered from his injuries.

An email seeking comment was sent to an attorney for McCaughey.

Democrats used the video of Hodges, which had been previously obtained by some media outlets, in their impeachment case against Trump accusing him of inciting the insurrection. The House impeached him — the second of his presidency — a week after the riot for telling his supporters that morning to “fight like hell” to overturn his defeat. The Senate acquitted him weeks later.

Over 480 Facing Federal Charges in the Riot

Footage released in a third case shows a man identified as Scott Fairlamb and others yelling at police as the officers walk through the crowd outside the Capitol. Fairlamb then shoves an officer and punches at his head, hitting his face shield. An email seeking comment was sent to Fairlamb’s attorney.

Court documents filed this week also show another man, Guy Reffitt of Texas, has been indicted on new charges that he brought a rifle and handgun to Washington and carried the handgun onto Capitol grounds. He was arrested in January and previously pleaded not guilty to charges including obstruction of an official proceeding.

Reffitt’s wife told authorities he’s a member of a Three Percenters group, according to court documents. Prosecutors say Reffitt led a group of rioters up the Capitol steps and was stopped only after officers used pepper balls, impact projectiles and pepper spray.

An email seeking comment was sent to Reffitt’s attorney on Friday.

More than 480 people are facing federal charges in the riot. Four have pleaded guilty so far, including a member of the Oath Keepers extremist group who has agreed to cooperate with investigators.

A 49-year-old Indiana grandmother is expected next week to become the first Jan. 6 person to be sentenced. Anna Morgan Lloyd is pleading guilty to a misdemeanor charge for entering the Capitol. Prosecutors are asking for a sentence of probation with community service and $500 in restitution.

After the riot, Morgan Lloyd described it on Facebook as the “most exciting day of my life,” according to prosecutors. She wrote in a letter to the judge filed in court that she didn’t see any violence at the Capitol and was “shocked” when she returned to her hotel and saw the news coverage.

“At first it didn’t dawn on me, but later I realized that if every person like me, who wasn’t violent, was removed from that crowd, the ones who were violent may have lost the nerve to do what they did. For that I am sorry and take responsibility,” she wrote.

The powerful video footage was made public as Senate Republicans have blocked a bipartisan inquiry into the insurrection and as an increasing number of House Republicans have defended the rioters and played down the violence of the day.

At a House Oversight and Reform hearing Tuesday, several Republicans questioned Democrats’ efforts to examine the attack and said they should instead be focused on issues like border security or COVID-19 restrictions.

Wisconsin Rep. Glenn Grothman grilled FBI Director Christopher Wray on whether some of those who were arrested for illegally entering the Capitol were in fact innocent. Arizona Rep. Paul Gosar repeated his arguments that a Trump supporter who was shot and killed by police while breaking into the House chamber, Ashli Babbitt, was “executed.”

At a hearing last month, GOP Rep. Andrew Clyde of Georgia said one video feed of the rioters looked like they were on a “normal tourist visit.”

Also Tuesday, 21 House Republicans voted against giving congressional medals of honor to Capitol Police and Metropolitan Police to thank them for their service that day. Dozens of those officers suffered injuries, including chemical burns, brain injuries and broken bones as the rioters overran them and broke into the building.