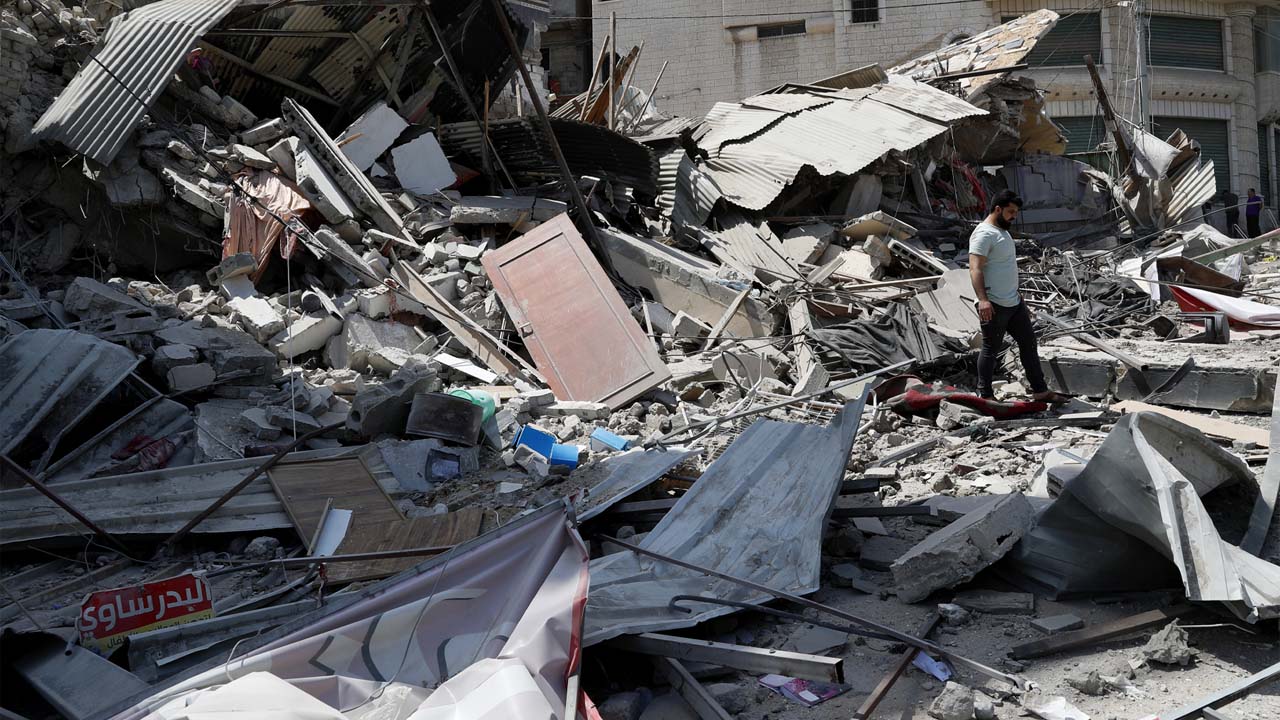 GAZA CITY, Gaza Strip — Israel unleashed another wave of airstrikes across the Gaza Strip early Thursday, killing at least one Palestinian and wounding several, and Hamas fired more rockets, even as expectations rose that a cease-fire could be reached.

Prime Minister Benjamin Netanyahu has pushed back against calls from the U.S. to wind down the Gaza offensive, appearing determined to inflict maximum damage on Hamas in a war that could help save his political career. Still, officials close to the negotiations say they expect a truce to be announced in the next 24 hours.

In another possible sign of progress, Netanyahu scheduled a meeting later Thursday with his Security Cabinet, where the issue of a cease-fire was likely to be debated.

Explosions shook Gaza City and orange flares lit up the pre-dawn sky, with bombing raids also reported in the central town of Deir al-Balah and the southern town of Khan Younis. As the sun rose, residents surveyed the rubble from at least five family homes destroyed in Khan Younis. There were also heavy airstrikes on a commercial thoroughfare in Gaza City.

The Israeli military said it struck at least three homes of Hamas commanders in Khan Younis and another in Rafah, targeting “military infrastructure,” as well as a weapons storage unit at a home in Gaza City.

With hundreds already killed in the worst fighting since Israel and Hamas’ 2014 war, U.S. President Joe Biden told Israel on Wednesday that he expected “a significant de-escalation today on the path to a cease-fire” — but Netanyahu pushed back, saying he was “determined to continue this operation until its aim is met.” It marked the first public rift between the two close allies since the fighting began and poses a difficult test of the U.S.-Israel relationship early in Biden’s presidency.

Still, an Egyptian intelligence official said a cease-fire was likely late Thursday or early Friday, after the U.S. appeal bolstered Cairo’s own efforts to halt the fighting. The official spoke on condition of anonymity to discuss the delicate talks.

Khalid Okasha, director of the Egyptian Center for Strategic Studies, which has close ties to the government, also said a cease-fire was likely in that timeframe, as did Osama Hamdan, a senior Hamas official.

Visiting the region, German Foreign Minister Heiko Maas said Israel has “the right to defend itself against such unacceptable attacks.” But he also expressed concern about the rising number of civilian victims and voiced support for truce efforts.

United Nations Mideast envoy Tor Wennesland was in the Gulf state of Qatar to help press forward with efforts to restore calm, a diplomatic official said. Energy-rich Qatar often helps mediate between Israel and Hamas and has donated hundreds of millions of dollars for development and humanitarian projects in Gaza in recent years to help maintain calm. The diplomat spoke on condition of anonymity because he was not authorized to discuss the matter with the media.

In New York, U.N. Secretary-General Antonio Guterres urged for an immediate cease-fire, speaking at the start of a U.N. General Assembly emergency meeting. He called on Israel and Hamas “to allow for mediation efforts to intensify in order to bring the fighting to an end.”

Even as the diplomatic efforts appeared to gather strength, an Israeli airstrike smashed into the Khawaldi family’s two-story house in Khan Younis, destroying it. The 11 residents, who were sleeping outside of the home out of fear, were all wounded and hospitalized, said Shaker al-Khozondar, a neighbor.

Shrapnel also hit his own home, killing his aunt and wounding her daughter and two other relatives, he said. Al-Khozondar spoke from his aunt Hoda’s bedroom where she had died. The windows were shattered and the bed pillows and rubble were stained with blood.

Weam Fares, a spokesman for a nearby hospital, confirmed the death and said at least 10 people were wounded in strikes overnight.

Heavy airstrikes also pummeled a street in the Jabaliya refugee camp in northern Gaza, destroying ramshackle homes with corrugated metal roofs nearby. The military said it struck two underground launchers in the camp used to fire rockets at Tel Aviv.

“Never in my life have I seen such destruction,” said Ibrahim Afana, 44. “We didn’t even have three minutes to put a slipper on our foot,” he said, describing his family’s panicked flight after they were awakened by the bombing. He said the army had called some residents to warn them about the impending strikes. There were no reports of casualties.

The current round of fighting between Israel and Hamas began May 10, when the militant group fired long-range rockets toward Jerusalem after days of clashes between Palestinian protesters and Israeli police at the Al-Aqsa Mosque compound, a flashpoint site sacred to Jews and Muslims. Heavy-handed police tactics at the compound and the threatened eviction of dozens of Palestinian families by Jewish settlers had inflamed tensions.

Since then, Israel has launched hundreds of airstrikes that it says have targeted Hamas’ infrastructure, including a vast tunnel network. Hamas and other militant groups embedded in residential areas have fired over 4,000 rockets at Israeli cities, with hundreds falling short and most of the rest intercepted.

At least 230 Palestinians have been killed, including 65 children and 39 women, with 1,710 people wounded, according to the Gaza Health Ministry, which does not break the numbers down into fighters and civilians. Hamas and militant group Islamic Jihad say at least 20 of their fighters have been killed, while Israel says the number is at least 130. Some 58,000 Palestinians have fled their homes.

Twelve people in Israel, including a 5-year-old boy, a 16-year-old girl and a soldier, have been killed. The military said an anti-tank missile fired from Gaza hit an empty bus near the frontier on Thursday, lightly wounding an Israeli soldier.

Since the fighting began, Gaza’s infrastructure, already weakened by a 14-year blockade, has rapidly deteriorated. Medical supplies, water and fuel for electricity are running low in the territory, on which Israel and Egypt imposed the blockade after Hamas seized power in 2007.

Israeli bombing has damaged over 50 schools across the territory, according to advocacy group Save the Children, completely destroying at least six. While repairs are done, education will be disrupted for nearly 42,000 children.

Israeli attacks have also damaged at least 18 hospitals and clinics and destroyed one health facility, the World Health Organization said. Nearly half of all essential drugs have run out.