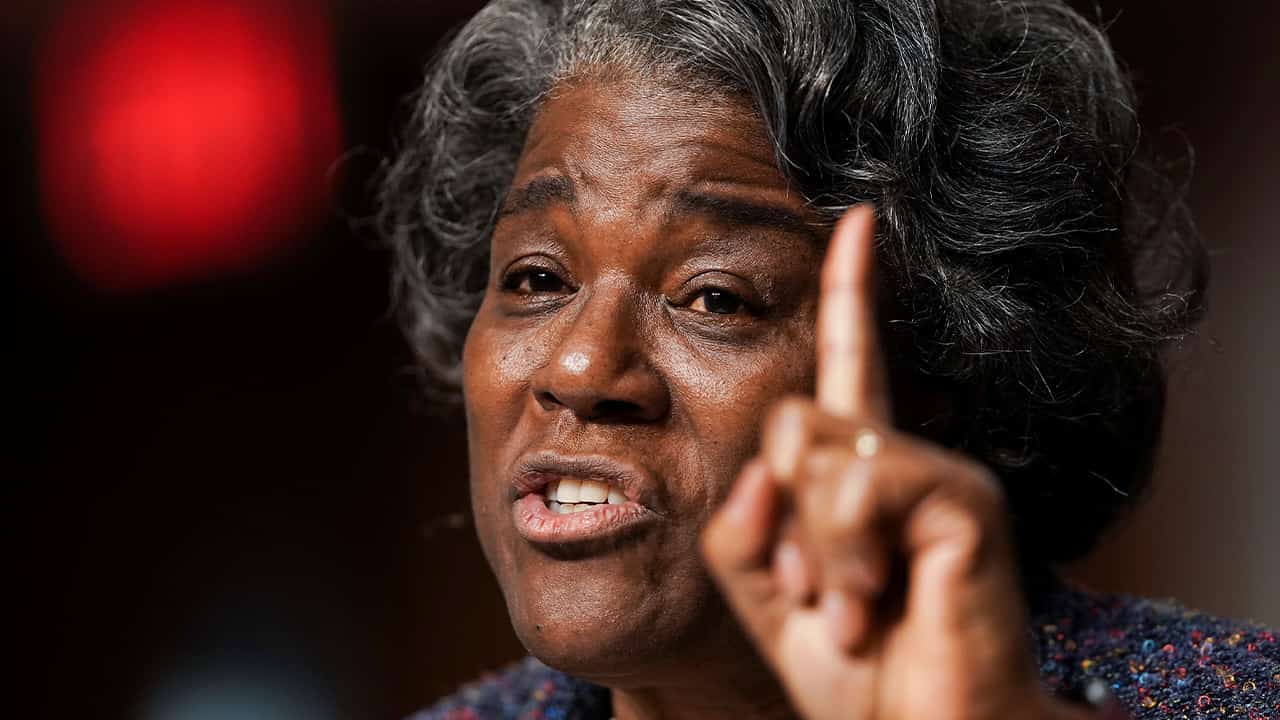 UNITED NATIONS — Linda Thomas-Greenfield called China “a strategic adversary” that threatens the world and expressed regret at a Senate hearing Wednesday on her nomination as United Nations ambassador for a speech she gave in 2019 that praised China’s initiatives in Africa and made no mention of its human rights abuses.

The veteran U.S. diplomat was pressured by Republican Sens. Ron Johnson of Wisconsin and Ted Cruz of Texas about the speech at Savannah State University’s Confucius Institute on “China-U.S.-Africa Relationships.” In it, she praised China’s $1 trillion Belt and Road global infrastructure program in Africa and called for “a win-win-win situation” where the U.S. and China would promote good governance, the rule of law and other values on the continent.

Johnson asked her why she had said the United States is not in a new Cold War with China. He pointed to Hong Kong, where China has cracked down on democracy activists, and Taiwan, where Beijing says flights by its warplanes near the island last weekend were a warning against foreign interference in any independence moves.

She explained that in the speech, which she wrote, she was referring to Africa, which was “sort of a pawn in the Cold War, and my conversation there was to say that Africans can no longer allow themselves to be a pawn. But this is not a Cold War for them, they have to take control of their own futures.”

Thomas-Greenfield Was Questioned About a Host of Other Issues

Cruz was tougher, saying “this speech is cheerleading for the Chinese Communist Party” and makes no mention of China’s human rights violations. Beijing has been sharply criticized for putting more than 1 million Uighurs and members of other Muslim minority groups into camps, among other rights abuses.

“It was not my intention, nor do I think that I cheered on the Chinese Communist Party,” Thomas-Greenfield replied. “I do regret that speech — one speech in a 35-year career.”

“I am not naive about what the Chinese are doing. I have called them out,” she stressed. “I see what they’re doing at the United Nations as undermining our values. … I will be working aggressively against China.”

At the hearing before the Senate Foreign Relations Committee, Thomas-Greenfield was questioned about a host of other issues, including the 2015 nuclear deal between Iran and major powers, which former President Donald Trump pulled out of in 2018. After the U.S. then ramped up sanctions, Iran gradually and publicly abandoned the deal’s limits on its nuclear development.

Thomas-Greenfield said the United States will be working not only with allies “but to see where we can find common ground with the Russians and the Chinese to put more pressure on the Iranians to push them back into strict compliance.”

In her opening remarks, Thomas-Greenfield spoke of China’s diplomatic inroads during the Trump administration, which pursued an “America First” policy that weakened international alliances. And she made clear there will be a change under President Joe Biden to re-engaging internationally and promoting American values.

Thomas-Greenfield stressed that American leadership must be rooted in the country’s core values — “support for democracy, respect for universal human rights, and the promotion of peace and security.”

Thomas-Greenfield Stressed That the U.S. Intention Is Not to Encourage or Support a Conflict

“He believes in considering every diplomatic tool in the toolkit — including bringing stronger language and tougher tactics to the table when needed,” Thomas-Greenfield said.

Johnson asked her what the stronger language and tougher tactics would be toward China.

“The tougher language will be calling the Chinese out whenever we see them crossing lines, particularly as it relates to their aggressive tactics both here in the United States and across the globe, not giving them a pass but making sure that the U.S. voice is heard clearly on any issue where we have concerns about the Chinese,” Thomas-Greenfield said.

Thomas-Greenfield stressed that the U.S. intention is not to encourage or support a conflict, but “to encourage the Chinese to change their behavior.”

She joined the State Department almost four decades ago, when Black women were even more of a rarity in the U.S. diplomatic corps than they are today, and she is the most experienced diplomat of the six people named by Biden for top national security positions.

She recalled in her opening statement going to a segregated high school and then to Louisiana State University “as a consequence of a lawsuit.” She said she was “not the norm” among the Ivy League graduates who also joined the Foreign Service in 1982.

“And yet, I had an extraordinary 35-year career, that culminated as the assistant secretary of state of African affairs,” Thomas-Greenfield said. “To me, that represents the progress, and promise, of America.”

Related Topics:ChinaLinda Thomas-Greenfield
Up Next