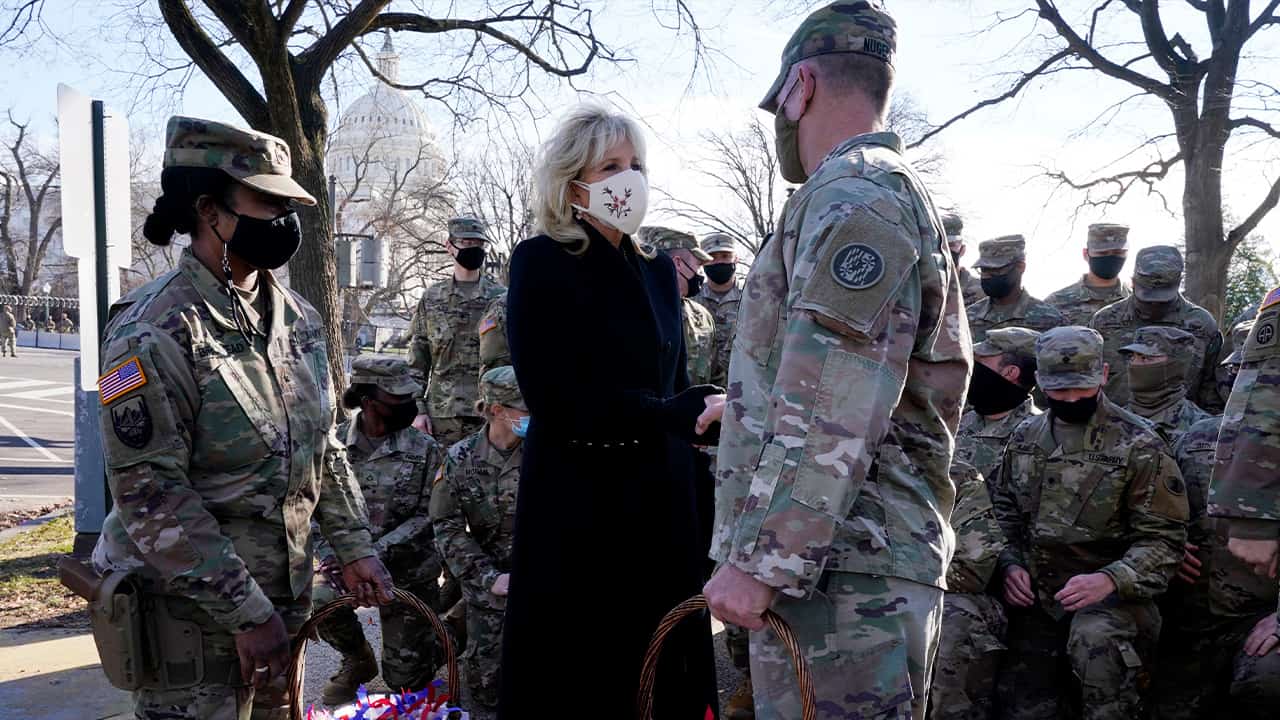 WASHINGTON — Images of National Guard soldiers camped in a cold parking garage after being sent to protect Washington sparked new calls Friday for investigations of the U.S. Capitol Police, now facing allegations that the agency evicted troops sent to help after its failure to stop rioting mobs two weeks ago.

President Joe Biden expressed his “dismay” Friday morning to Gen. Daniel R. Hokanson, chief of the National Guard, about how the troops had been treated, White House press secretary Jen Psaki said. Members of both parties were irate about reports that Guardsmen were forced to take rest breaks outside the Capitol building. About 25,000 Guard members from across the country deployed to help secure President Joe Biden’s inauguration, which went off with only a handful of minor arrests.

Psaki said the president thanked Hokanson and the Guard for their help the last few weeks and offered his assistance if Hokanson needed anything. First lady Jill Biden visited Guard troops outside the Capitol on Friday, bringing them cookies and thanking them for protecting her family. She noted that the Bidens’ late son, Beau, served in the Delaware Army National Guard.

A jittery Washington had requested aid following the riot where police were badly outnumbered, locking down the nation’s capital with soldiers, police and barricades. Lawmakers and Biden took pains to thank security forces for their effort. All 25,000 Guard members were vetted by the FBI over concerns of an insider attack, and a dozen were removed from their posts including two who made extremist statements about the inauguration.

Both the Guard and Capitol Police issued a joint statement Friday afternoon saying they have now coordinated to establish “appropriate spaces” within Congressional buildings for on-duty breaks. The statement noted that off-duty troops have hotel rooms or “other comfortable accommodations.”

The Guardsmen Were Allowed Back Inside Late Thursday

The National Guard said it originally moved troops out of the Capitol Rotunda and other spaces to garages at the behest of the Capitol Police. The Guardsmen were allowed back inside late Thursday after reports were widely shared of the conditions in the garages, with few bathrooms and little covering from the cold.

“The troops didn’t move on their own,” said Inhofe, the top Republican on the Senate Armed Services Committee. He added: “This isn’t a blame game, but I want to know what happened so we can make sure it can’t happen again.”

Rep. Tim Ryan, D-Ohio, who leads a subcommittee that oversees the Capitol Police budget, said Pittman and other commanders would eventually need to testify about their decision-making.

“If the Capitol Police in any way, shape, or form pushed the Guard out into a cold garage, then there’s going to be hell to pay,” Ryan said . “We’re already trying to re-establish trust with the Capitol Police and we’ve got to figure out exactly what happened.”

Thousands of Guard Troops From All Across the Country Poured Into D.C. by the Planeload and Busload

The National Guard Bureau said Thursday that of the nearly 26,000 Guard troops deployed to D.C. for the inaugural, just 10,600 remain on duty. The bureau said the Guard is helping states with coordination and the logistics so that troops can get home.

Thousands of Guard troops from all across the country poured into D.C. by the planeload and busload late last week, in response to escalating security threats and fears of more rioting. Military aircraft crowded the runways at Joint Base Andrews in Maryland, carrying Guard members into the region in the wake of the deadly Jan. 6 insurrection at the U.S. Capitol.

Guard forces were scattered around the city, helping to secure the Capitol, monuments, Metro entrances and the perimeter of central D.C., which was largely locked down for several days leading up to Wednesday’s inaugural ceremony.

Some local law enforcement agencies have asked for continued assistance from the Guard, so roughly 7,000 troops are expected to stay in the region through the end of the month.

The insurrection highlighted multiple failures by the Capitol Police to prepare for what became a violent mob overrunning parts of the building. Officers who spoke to The Associated Press on condition of anonymity said there was little planning before the riot or guidance from department leaders once the riot began.

The riot left five people dead, including Capitol Police Officer Brian Sicknick, who was hit in the head by a fire extinguisher. Another officer died in an apparent suicide after the attack.

Related Topics:National Guard
Up Next