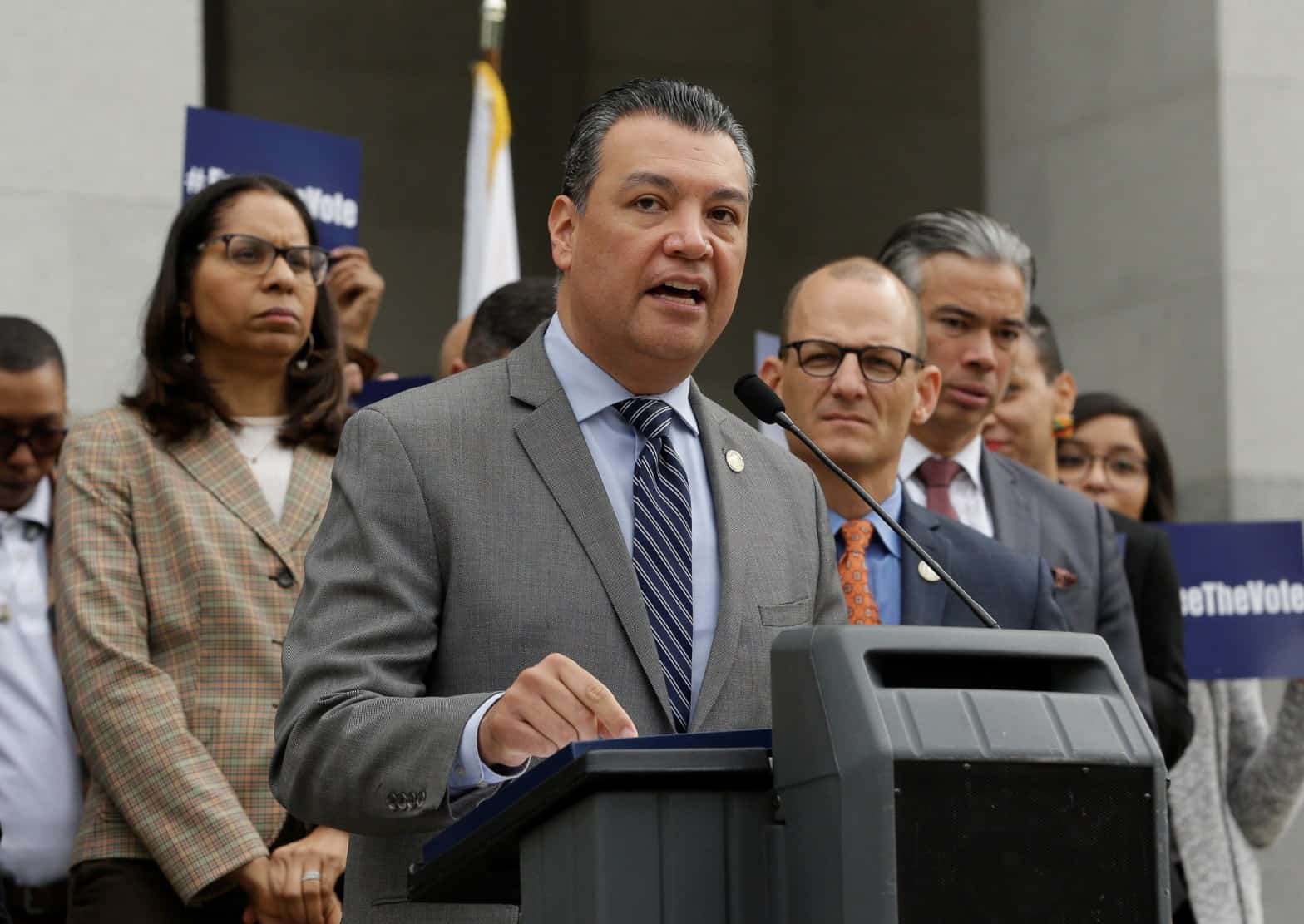 After Joe Biden picked Sen. Kamala Harris as his vice presidential running mate in August, the parlor game of choice for California’s most politically plugged-in was: Who will Gov. Gavin Newsom pick to fill her vacant Senate seat?

Alex Padilla — California’s secretary of state, a Democrat from Pacoima, loyal Newsom ally and a Latino in a state that has never had a member of that largest ethnic group serve as senator — was a top pick among the predictions of insiders. The governor announced his choice in late December and made the appointment official today.

But for many Californians — perhaps the majority — Padilla’s appointment is likely to elicit more curiosity than self-congratulation, less “I knew it” and more “who knew?”

If you’re acquainting yourself with Padilla for the first time, here are a few takeaways from his California CV.

Like surfing, Silicon Valley and unaffordable housing, California has made easy access to the ballot box its calling card. While many GOP-run states have embraced voter ID requirements and have balked at the prospect of sending ballots by mail, we’ve gone in the opposite direction.

Padilla can take credit for a lot of that.

Consider these recent changes to the state’s voting rules:

All of that is the result of legislation sponsored by Padilla. And as head of the national coalition of Democratic state election administrators, he has also been one of the most prominent evangelists for California’s election model on the national stage.

With mammoth turnout expected in an election like no other, staff inside the Secretary of State’s office spent the summer of 2020 scrambling to inform voters about the what, when, where and how of voting.

That’s why they inked a contract in September with the political consulting firm, SKDKnickerbocker, to run a statewide PR campaign called Vote Safe California. The total tab: $35 million.

That contract got Padilla into hot water with Republicans. SKDKnickerbocker has longstanding ties to the Democratic Party and was a client of president-elect Joe Biden, then a candidate in the election the firm had been hired to promote. GOP members of Congress launched an investigation and the conservative Howard Jarvis Taxpayers Association took Padilla to court.

As CalMatters reported, the contract also didn’t go over well with the state’s Democratic controller, Betty Yee, who is responsible for approving all state government payments. According to Yee’s staff, Padilla’s office planned to draw the necessary $35 million from a pot of cash that was supposed to fund county government voter outreach operations. In a letter Padlla wrote to Yee, he argued that the SKDKnickerbocker campaign was being conducted “on behalf of counties.”

It’s unclear who will ultimately be left holding the bag.

The statewide ban wasn’t enacted without a fight. Padilla drew flack from fellow Los Angeles Democrats who worried the bill would harm a major plastic bag manufacturer south of downtown.

Conservative critics piled on, both in California and nationally, highlighting Padilla’s effort as a measure par excellence of California nanny statism. The Pacoima senator made an easy target for the libertarian critique. Prior legislative efforts of his included a successful bill to force chain restaurants to list calorie counts on their menus and an unsuccessful one to ban the sale of tobacco products near schools.

Padilla brushed off the concerns about the bag ban during a speech on the Senate floor in 2014.

When local governments have introduced plastic bag bans, he said, “the sky does not fall and consumers adapt and life goes on.”

Even after the bill was signed — two years after it was first introduced — it didn’t become law immediately. In 2016, plastic bag manufacturers took to the ballot to override Padilla’s ban. But that campaign failed. The cloth bags you might store in your closet or in the trunk of your car are testament to that and to Padilla’s work.

Like an entire generation of young Latinos, including former Senate leader Kevin De León, Padilla insists he had no intention of getting involved in politics until 1994.

That year, Proposition 187 was on the ballot, a measure to exclude undocumented immigrants from all non-emergency public services, including public education.

Padilla said it was the naked nativism of that campaign — and of Gov. Pete Wilson’s, who was running for re-election as a supporter of 187 — that drew him to Demoratic party activism. The son of Mexican immigrants who grew up in the San Fernando Valley, Padilla told CalMatters in 2018 that he felt that he “had to get involved so that families like mine, communities like mine, would not continue to be scapegoated or targeted.”

Padilla was in early 20’s at the time. Fresh out of college with a big ticket bachelor’s degree, his parents were not immediately on board with his turn to politics. As he recalled it: “Wait a minute, four years of MIT engineering school…for what?”

He started behind the scenes. He worked the campaigns and made friends with up-and-coming members of the Legislature, including Tony Cárdenas, now a congressman. He served as an aide to Sen. Dianne Feinstein. In 1998, he finally ran for a seat of his own and a year later, at 26, he was elected to the Los Angeles City Council. At 28, he became the council’s youngest president — a feat not just for Padilla, but for the growing coalition of Latino Democrats in the valley’s northeast.

On the Los Angeles City Council, Padilla had a knack for bringing “consensus and calm and peace,” said Harvey Englander, a longtime lobbyist and public affairs consultant in Los Angeles. “It’s not that he didn’t make waves but he didn’t make enemies.”

Padilla’s alliance with Newsom began as a marriage of convenience.

When Newsom announced his bid to run for governor in 2010, challenging the elder statesman and front runner Jerry Brown, the San Francisco mayor knew he needed to make inroads in southern California — particularly with Latino voters.

And so the gubernatorial hopeful picked Padilla, a newly elected state senator and a rising star in the party, to help him do just that.

Newsom’s bid was a long shot that predictably failed. He dropped his campaign before Brown even officially announced his own run, opting instead to campaign for lieutenant governor. But Newsom was a rising star in his own right and Padilla’s early support gave the young senator a prominent role in a statewide campaign. It also earned him an ally on the rise.

In 2017, when Newsom decided to run for governor again, Padilla once again offered his endorsement, supporting the lieutenant governor over Antonio Villaraigosa, who had served as Los Angeles mayor when Padilla was on the council.

That loyalty seems to have paid off.

Inaugural Poet Amanda Gorman: ‘Even as We Grieved, We Grew.’

Rain Coming Soon to Fresno and Other Parched California Cities