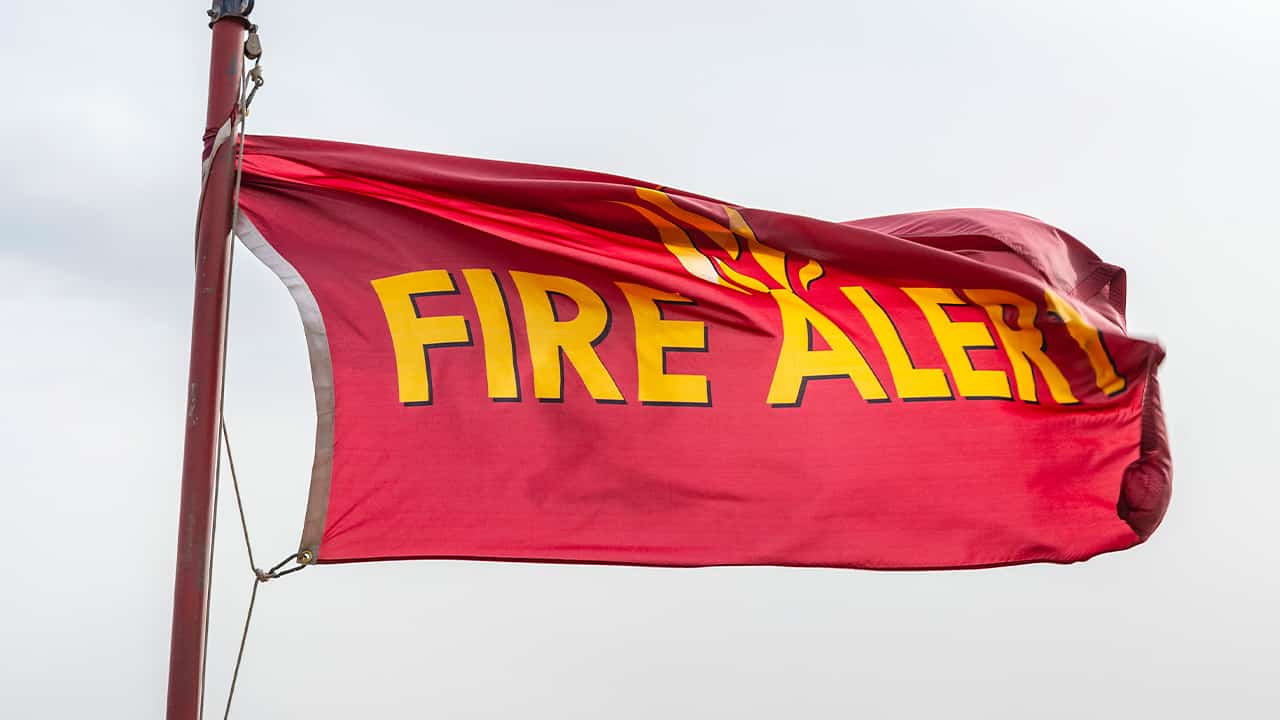 SANTA CRUZ — Months-old embers from a deadly California fire were blown back to life Tuesday by powerful winds that raked the state and prompted safety blackouts to tens of thousands of people.

Firefighters chased wind-driven blazes up and down the state, trees and trucks were toppled, Yosemite National Park was forced to close and two coronavirus vaccination centers were shut down.

South of San Francisco, the state’s firefighting agency said it responded to 13 vegetation fires in San Mateo and Santa Cruz counties in 12 hours, and isolated evacuations were ordered for a total of 120 homes near two of them.

The fires were small, with the largest no more than a few dozen acres, and by nightfall were “creeping” rather than racing, according to state fire website descriptions. Two were within the area burned by last year’s CZU Lightning Complex inferno.

“Fires within the CZU Lightning Complex burn area were regenerated by high winds,” the local unit of the California Department of Forestry and Fire Protection tweeted.

The Santa Cruz Mountains have a thick layer of “duff,” dead vegetation under heavy timber in which deep smoldering embers can be revived by the wind, said Cecile Juliette, a Cal Fire spokeswoman.

Small Fires Blazed Throughout the State, Though Most Were Quickly Stopped From Spreading

Small fires blazed throughout the state, though most were quickly stopped from spreading and posed no serious threat to homes. The largest, near Bakersfield in the San Joaquin Valley, burned about 1 square mile but was mostly surrounded.

In both the north and south, residents were blacked out by utilities to prevent downed or damaged power lines from sparking blazes.

Southern California Edison shut off power to more than 78,000 homes and businesses in seven counties and was considering blacking out well over a quarter-million more. Pacific Gas & Electric cut power to more than 5,000 customers.

That was in addition to nearly 300,000 customers in the northern and central parts of the state that had lost power because of the weather. About 70,000 remained without power by Tuesday evening.

Most of California is experiencing drought conditions and the remainder is considered abnormally dry. Winter snowfall and rain have largely been woeful.

Gusts began Monday night and raged into Tuesday. They howled at speeds up to 95 mph in the Mayacamas Mountains to the north of San Francisco Bay, and winds raised clouds of ash and dust from wildfire burn scars across Monterey County, the regional National Weather Service office said.

High wind warnings were posted in the Sierra Nevada and adjacent foothills.

Yosemite National Park Closed for the Day, Citing the Winds and Downed Trees That Smashed Trucks

“People should avoid being outside in forested areas and around trees and branches,” the Hanford weather office wrote. “If possible, remain in the lower levels of your home during the windstorm, and avoid windows. Use caution if you must drive.”

Yosemite National Park closed for the day, citing the winds and downed trees that smashed trucks and at least one building. The park said it could remain closed until Friday morning.

In rural Bass Lake, south of the park, a 100-foot pine tree smashed through Don Mandy’s house as he was posting a Facebook message about the roaring winds keeping him awake.

“It sounded like an earthquake,” he told KFSN-TV. Then a second tree toppled and a branch poked another hole through his roof. He and his wife fled for cover in another area of the house and weren’t harmed.

In Southern California, the region’s notorious Santa Ana winds were ramping up, making travel hazardous for big rigs. Some were blown over. One gust hit 86 mph in northern Los Angeles County, the National Weather Service said.

The winds began easing Tuesday afternoon in the Bay Area and northward, which would see “dry and tranquil midweek weather,” according to a National Weather Service forecast. But strong northeast winds were expected to continue in Southern California through Wednesday.

The wind forced closure of a mass COVID-19 vaccination site at Hansen Dam in the San Fernando Valley. Another site at a Disneyland parking lot was closed in advance of the gusts.

The city of Los Angeles instituted its program of restricting parking in hilly neighborhoods where narrow, winding streets can be difficult for fire engines to maneuver.

Downtown Los Angeles has had only 1.95 inches of rain since the Oct. 1 start of the “water year,” nearly 4 inches below normal.

Vice President Harris: A New Chapter Opens in US Politics