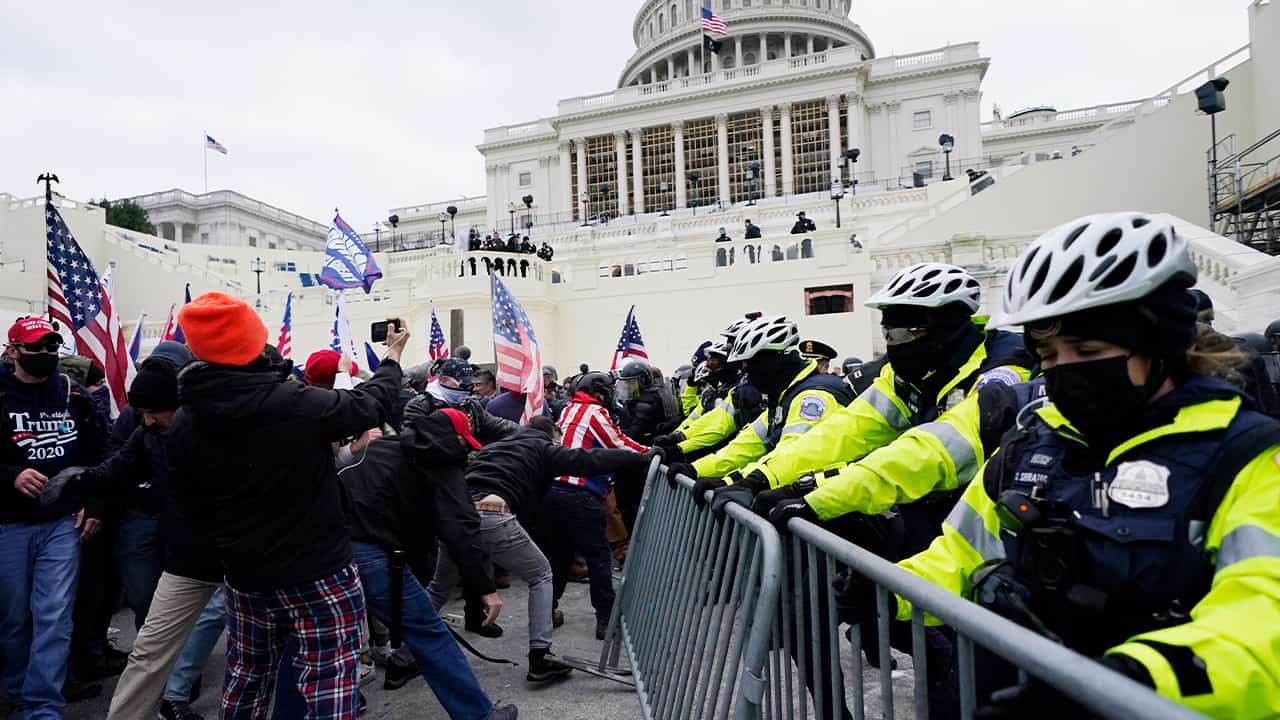 WASHINGTON — Under battle flags bearing Donald Trump’s name, the Capitol’s attackers pinned a bloodied police officer in a doorway, his twisted face and screams captured on video. They mortally wounded another officer with a blunt weapon and body-slammed a third over a railing into the crowd.

“Hang Mike Pence!” the insurrectionists chanted as they pressed inside, beating police with pipes. They demanded House Speaker Nancy Pelosi’s whereabouts, too. They hunted any and all lawmakers: “Where are they?” Outside, makeshift gallows stood, complete with sturdy wooden steps and the noose. Guns and pipe bombs had been stashed in the vicinity.

Only days later is the extent of the danger from one of the darkest episodes in American democracy coming into focus. The sinister nature of the assault has become evident, betraying the crowd as a force determined to occupy the inner sanctums of Congress and run down leaders — Trump’s vice president and the Democratic House speaker among them.

This was not just a collection of Trump supporters with MAGA bling caught up in a wave.

That revelation came in real time to Rep. Jim McGovern, D-Mass., who briefly took over proceedings in the House chamber as the mob closed in Wednesday and Pelosi was spirited to safer quarters moments before everything went haywire.

“I saw this crowd of people banging on that glass screaming,” McGovern told The Associated Press on Sunday. “Looking at their faces, it occurred to me, these aren’t protesters. These are people who want to do harm.”

“What I saw in front of me,” he said, “was basically home-grown fascism, out of control.”

Pelosi said Sunday “the evidence is that it was a well-planned, organized group with leadership and guidance and direction. And the direction was to go get people.” She did not elaborate on that point in a ”60 Minutes” interview on CBS.

The scenes of rage, violence and agony are so vast that the whole of it may still be beyond comprehension. But with countless smartphone videos emerging from the scene, much of it from gloating insurrectionists themselves, and more lawmakers recounting the chaos that was around them, the contours of the uprising are increasingly coming into relief. In an image provided by CBS News and “60 Minutes,” a mirror is seen damaged in the private office of House Speaker Nancy Pelosi, D-California, Friday, Jan. 8, 2021, at the U.S. Capitol, in Washington. In an interview that aired Sunday, Jan. 10 on “60 Minutes,” Pelosi talked about her experience during the insurrection at the Capitol on Wednesday, Jan. 6. (60 Minutes/CBSNews via AP)

The mob got stirring encouragement from Trump and more explicit marching orders from the president’s men.

“Fight like hell,” Trump exhorted his partisans at the staging rally. “Let’s have trial by combat,” implored his lawyer, Rudy Giuliani, whose attempt to throw out election results in trial by courtroom failed. It’s time to “start taking down names and kicking ass,” said Republican Rep. Mo Brooks of Alabama.

Criminals pardoned by Trump, among them Roger Stone and Michael Flynn, came forward at rallies on the eve of the attack to tell the crowds they were fighting a battle between good and evil. On Capitol Hill, Republican Sen. Josh Hawley of Missouri gave a clenched-fist salute to the hordes outside the Capitol as he pulled up to press his challenge of the election results.

The crowd was pumped. Until a little after 2 p.m., Senate Majority Leader Mitch McConnell was at the helm for the final minutes of decorum in partnership with Pence, who was serving his ceremonial role presiding over the process.

Both men had backed Trump’s agenda and excused or ignored his provocations for four years, but now had no mechanism or will to subvert the election won by Biden. That placed them high among the insurrectionists’ targets, no different in the minds of the mob from the “socialists.”

“If this election were overturned by mere allegations from the losing side, our democracy would enter a death spiral,” McConnell told his chamber, not long before things spiraled out of control in what lawmakers call the “People’s House.”

Far-right social media users had openly hinted for weeks that chaos would erupt at the Capitol when Congress convened to certify the election results. As the attack unfolded, they urged followers to “trust the plan” and “hold the line.” Just what the plan might have been is central to the investigation.

The FBI is investigating whether some of the attackers intended to kidnap members of Congress and hold them hostage. Authorities are particularly focused on why some in the mob were seen carrying plastic zip-tie handcuffs and had apparently accessed areas of the Capitol generally difficult for the public to locate.

Thousands had swarmed the Capitol. They charged into police and metal barricades outside the building, shoving and hitting officers in their way. The assault quickly pushed through the vastly outnumbered police line; officers ran down one man and pummeled him.

In the melee outside, near the structure built for Joe Biden’s inauguration on Jan. 20, a man threw a fire extinguisher at the helmeted head of a police officer. Then he picked up a bullhorn and threw it at officers, too.

The identity of the officer could not immediately be confirmed. But Capitol Police officer Brian Sicknick, who was wounded in the chaos, died the next night; officials say he had been hit in the head with a fire extinguisher.

Shortly after 2 p.m., Capitol Police sent an alert telling workers in a House office building to head to underground transportation tunnels that criss-cross the complex. Minutes later, Pence was taken from the Senate chamber to a secret location and police announced the lockdown of the Capitol. “You may move throughout the building(s) but stay away from exterior windows and doors,” said the email blast. “If you are outside, seek cover.”

At 2:15 p.m., the Senate recessed its Electoral College debate and a voice was heard over the chamber’s audio system: “The protesters are in the building.” The doors of the House chamber were barricaded and lawmakers inside it were told they may need to duck under their chairs or relocate to cloakrooms off the House floor because the mob has breached the Capitol Rotunda.

Even before the mob reached sealed doors of the House chamber, Capitol Police pulled Pelosi away from the podium, she told “60 Minutes.”

At 2:44 p.m., as lawmakers inside the House chamber prepared to be evacuated, a gunshot was heard from right outside, in the Speaker’s Lobby on the other side of the barricaded doors. That’s when Ashli Babbit, wearing a Trump flag like a cape, was shot to death on camera as insurrectionists railed, her blood pooling on the white marble floor.

The Air Force veteran from California had climbed through a broken window into the Speaker’s Lobby before a police officer’s gunshot felled her.

Back in the House chamber, a woman in the balcony was seen and heard screaming. Why she was doing that only became clear later when video circulated. She was screaming a prayer.

Within about 10 minutes of the shooting, House lawmakers and staff members who had been cowering during the onslaught, terror etched into their faces, had been taken from the chamber and gallery to a secure room. The mob broke into Pelosi’s offices while members of her staff hid in one of the rooms of her suite. 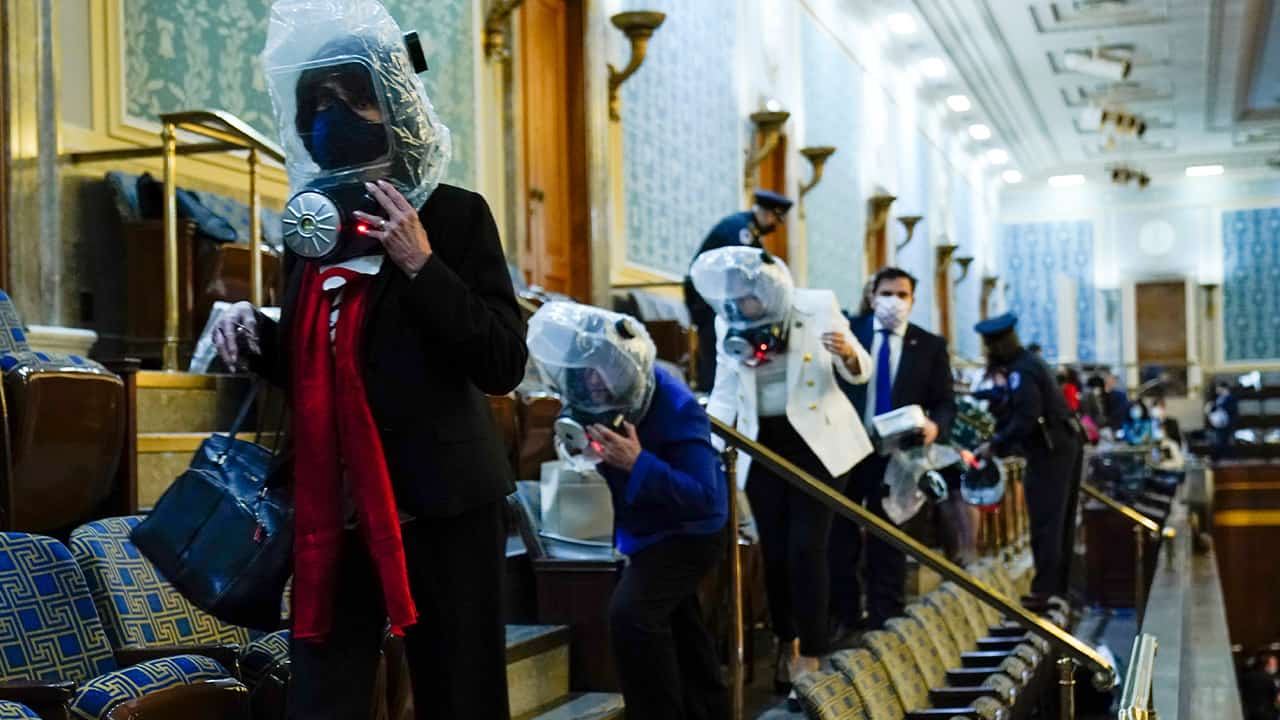 People shelter in the House gallery as protesters try to break into the House Chamber at the U.S. Capitol on Wednesday, Jan. 6, 2021, in Washington. (AP Photo/Andrew Harnik)

“The staff went under the table, barricaded the door, turned out the lights and were silent in the dark,” she said. “Under the table for two and a half hours.”

On the Senate side, Capitol Police had circled the chamber and ordered all staff and reporters and any nearby senators into the chamber and locked it down. At one point about 200 people were inside; an officer armed with what appeared to be a semi-automatic weapon stood between McConnell and the Democratic leader, Sen. Chuck Schumer.

Authorities then ordered an evacuation and rushed everyone inside to a secure location, the Senate parliamentary staff scooping up the boxes holding the Electoral Collage certificates.

Although the Capitol’s attackers had been sent with Trump’s exhortation to fight, they appeared in some cases to be surprised that they had actually made it in.

When they breached the abandoned Senate chamber, they milled around, rummaged through papers, sat at desks and took videos and pictures. One of them climbed to the dais and yelled, “Trump won that election!” Two others were photographed carrying flex cuffs typically used for mass arrests.

But outside the chamber, the mob’s hunt was still on for lawmakers. “Where are they?” people could be heard yelling.

That question could have also applied to reinforcements — where were they?

At about 5:30 p.m., once the National Guard had arrived to supplement the overwhelmed Capitol Police force, a full-on effort began to get the attackers out.

Heavily armed officers brought in as reinforcements started using tear gas in a coordinated fashion to get people moving toward the door, then combed the halls for stragglers. As darkness fell, they pushed the mob farther out onto the plaza and lawn, using officers in riot gear in full shields and clouds of tear gas, flash-bangs and percussion grenades.

At 7:23 p.m., officials announced that people hunkered down in two nearby congressional office buildings could leave “if anyone must.”

Within the hour, the Senate had resumed its work and the House followed, returning the People’s House to the control of the people’s representatives. Lawmakers affirmed Biden’s election victory early the next morning, shell-shocked by the catastrophic failure of security.