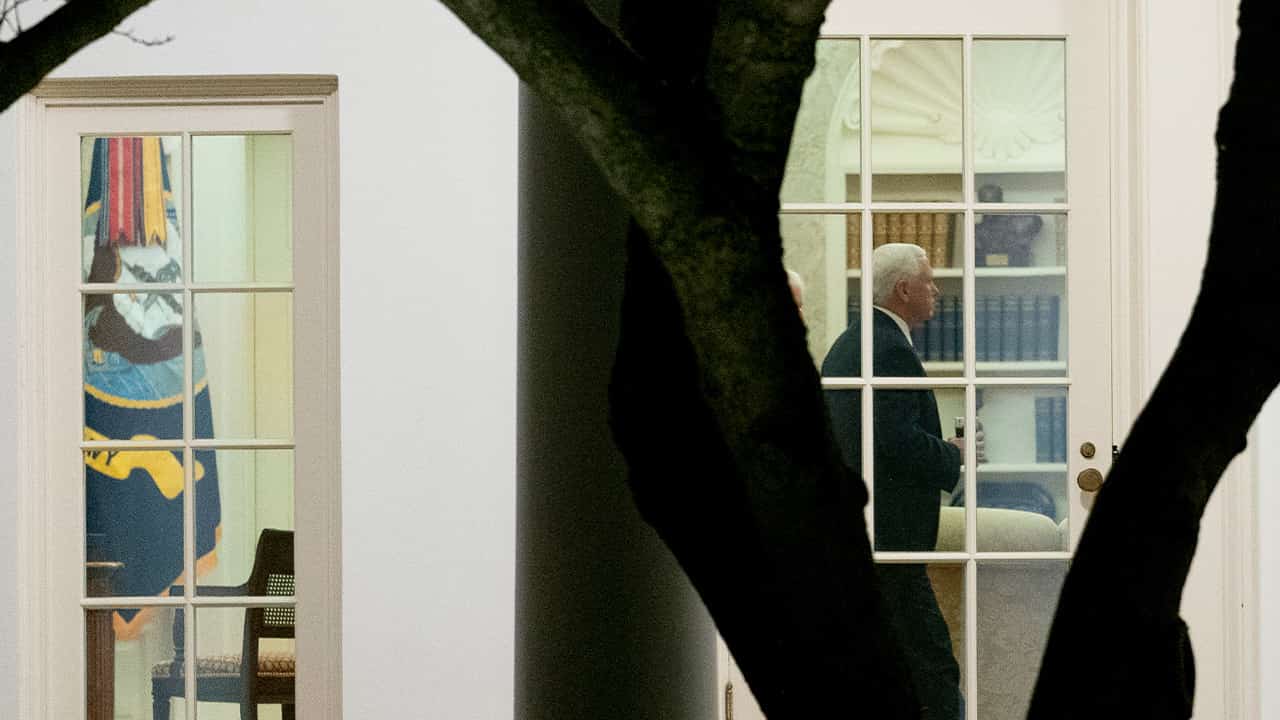 WASHINGTON — He has been President Donald Trump’s most loyal soldier, dutifully backing the unpredictable leader and largely avoiding his ire.

Now Vice President Mike Pence finds himself in the most precarious position of his tenure as he prepares to preside over Wednesday’s congressional tally of Electoral College votes, the last front in Trump’s futile attempts to overturn President-elect Joe Biden’s victory in the November election.

Seated on the House of Representatives’ rostrum, Pence will bear witness to the formalization of Trump’s — and his own — election defeat, as tellers from the House and Senate record states’ electoral votes. At the end of the count, it will be his job to announce who has won the majority of votes for both president and vice president.

But Pence, whose proscribed role is largely pro forma, is under intense pressure from the president and legions of supporters who want the vice president to use the moment to overturn the will of the voters in a handful of critical battleground states.

“I hope Mike Pence comes through for us, I have to tell you,” Trump said at a rally Monday night in Georgia for candidates in two Senate runoff elections.

“Of course, if he doesn’t come through, I won’t like him quite as much,” Trump added, drawing laughs. He said Pence was “going to have a lot to say about it. And you know one thing with him, you’re going to get straight shots. He’s going to call it straight.”

Trump continued to pile on Tuesday, tweeting that Pence “has the power to reject fraudulently chosen electors.” The Constitution does not grant the vice president any such power — it is up to the House and Senate to voice objections — and states’ electors were chosen in accordance with state law, not fraudulently.

Pence has nonetheless spent hours huddling with the president, staff and the Senate parliamentarian ahead of Wednesday’s proceedings. His office declined to discuss his plans, but people close to the vice president stressed his respect for institutions and said they expect him to act in accordance with the law and hew to the Constitution.

“I think he will approach this as a constitutionalist, basically, and say, ’What’s my role in the Constitution as president of the Senate?’” said David McIntosh, president of the conservative Club for Growth and a Pence friend. “What he’ll do is allow anybody who is going to move to object to be heard, but then abide by what the majority of the Senate makes the outcome.”

In fulfilling one of the few formal responsibilities of the vice presidency, Pence also risks compromising his own political future. Pence is eyeing his own run for the White House in 2024, and is banking on his years of loyalty to Trump — likely to be the GOP’s top kingmaker for years to come — to help him stand out in what is expected to be a crowded field.

That means he must avoid angering Trump along with large portions of the Republican base, who have bought into the president’s unsupported claims of widespread election fraud and have been falsely led to believe that Pence has the power to reverse the outcome by rejecting the votes from states like Georgia, Michigan, Wisconsin and Pennsylvania that swung from Trump in 2016 to Biden in 2020.

“Stop the steal!” voters in Georgia chanted to Pence at a rally for the Senate candidates at the Rock Springs Church in Milner, Georgia, on Monday.

“I know we all — we all got our doubts about the last election. And I want to assure you, I share the concerns of millions of Americans about voting irregularities,” Pence told the crowd. “And I promise you, come this Wednesday, we’ll have our day in Congress. We’ll hear the objections. We’ll hear the evidence.”

On Wednesday beginning at 1 p.m., Pence is to preside over a joint session of Congress. His role is to open the certificates of the electoral votes from each state and present them to the appointed “tellers” from the House and Senate in alphabetical order. At the end of the count, it falls to Pence to announce who won.

In 2017, it fell to Biden to intone, “It is over” after votes were tallied for Trump and Pence.

Allies stress his role is largely ministerial, and that the electoral count could only be overturned by the lawmakers — a virtual impossibility given that Democrats control the House. But Pence on Sunday held a two-hour meeting that included the Senate parliamentarian to review his role and responsibilities

And on Monday, Pence was in the Oval Office with Trump and senior aides as the president continued to seek pathways to overturn the election results. The scene appeared animated as the president, Pence and their chiefs of staff met with lawyer John Eastman and others.

Former New York Mayor Rudy Giuliani, who has been leading the president’s legal effort, said in a podcast interview that the team had been consulting with constitutional law professors and analyzing Pence’s options. He said Trump and Pence on Monday were “going through all of the research” and would probably wait until Tuesday to make a decision on how to proceed.

Despite Claims by Trump and His Allies, There Was Not Widespread Fraud in the Election

“The president will make this decision based on his judgment and the advice that he gets on what the Constitution demands,” Giuliani told conservative activist Charlie Kirk.

Despite claims by Trump and his allies, there was not widespread fraud in the election. This has been confirmed by a range of election officials and by William Barr, who stepped down as attorney general last month. Neither Trump nor any of the lawmakers promising to object to the count have presented credible evidence that would change the outcome.

Nevertheless, more than 100 House Republicans and a dozen Senate Republicans have said they will challenge the electoral votes of at least one of the battleground states on Wednesday.

And on Monday, Republican parties in several states had Ronna McDaniel, who chairs the Republican National Committee, deliver letters to Pence encouraging him to reject the legally selected electors from Georgia, Michigan, Wisconsin, Arizona, Nevada and Pennsylvania.

The efforts make it all but impossible for Pence to remain above the fray, as some allies had hoped. Others have expressed regret that some extreme Trump loyalists, including former national security adviser Michael Flynn and attorney Sidney Powell, have tried to drive a wedge between Trump and his vice president during the final days of the administration.

That frustration seems to be shared by Pence, who recently expressed his frustrations to McIntosh about an ad from the anti-Trump group The Lincoln Project that painted the vice president as distancing himself from Trump. So the Club for Growth cut its own ad, which it aired in Palm Beach during Trump’s Florida vacation, trumpeting Pence’s loyalty to the president.

McIntosh said Pence resented what he felt was a “cheap shot” by the group, adding that he expects Pence to emerge from this week’s drama with his reputation intact.

“In the moment, there is that uncomfortable feeling, but in the long run, people respect you if you do what you think is right and explain why you do it,” he said. “This moment will pass. The decision will be made.”