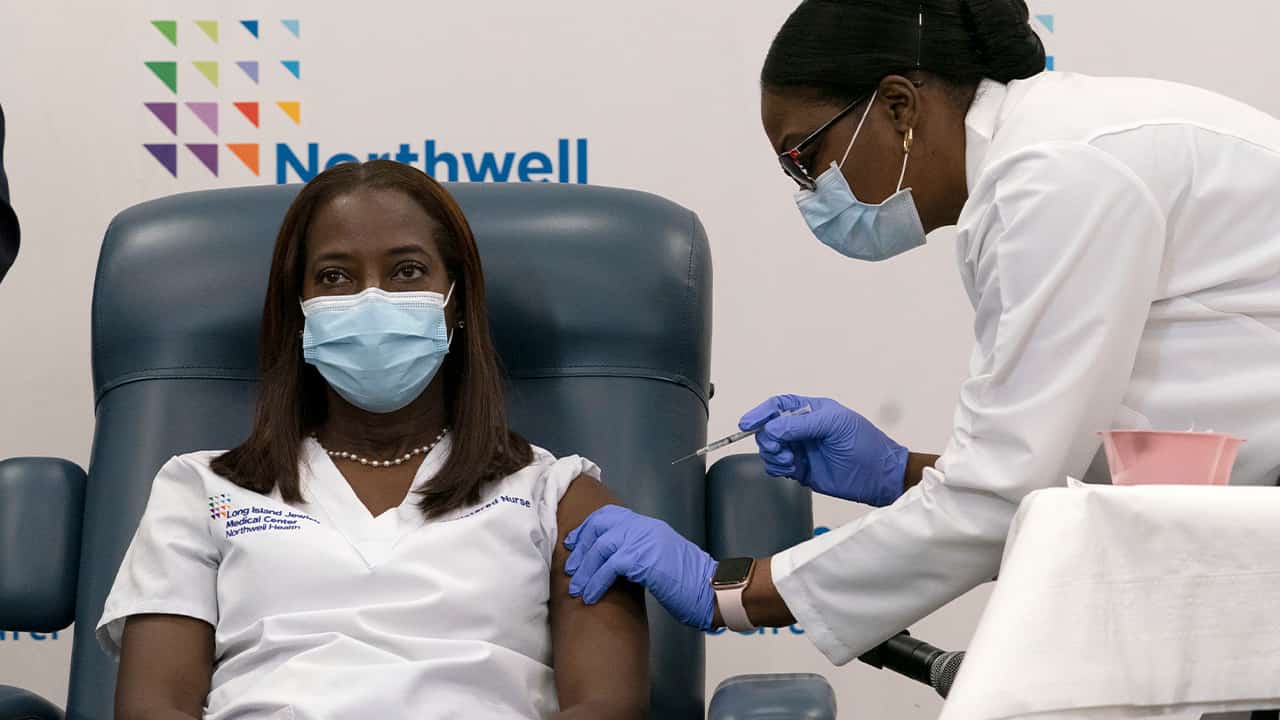 The biggest vaccination campaign in U.S. history kicked off Monday as health workers rolled up their sleeves for shots to protect them from COVID-19 and start beating back the pandemic — a day of optimism even as the nation’s death toll closed in on 300,000.

With a countdown of “three, two, one,” workers at Ohio State University’s Wexner Medical Center gave the first injections to applause.

And in New Orleans, Steven Lee, an intensive care unit pharmacist at Ochsner Medical Center, summed up the moment as he got his own vaccination: “We can finally prevent the disease as opposed to treating it.”

Other hospitals around the country, from Rhode Island to Texas, unloaded precious frozen vials of vaccine made by Pfizer Inc. and its German partner BioNTech, with staggered deliveries set throughout Monday and Tuesday. Several other countries also have authorized the vaccine, including Britain, which started vaccinating people last week.

For health care workers, who along with nursing home residents will be first in line for vaccination, hope is tempered by grief and the sheer exhaustion of months spent battling a coronavirus that still is surging in the U.S. and around the world.

“This is mile 24 of a marathon. People are fatigued. But we also recognize that this end is in sight,” said Dr. Chris Dale of Swedish Health Services in Seattle.

Packed in dry ice to stay at ultra-frozen temperatures, the first of nearly 3 million doses being shipped are a down payment on the amount needed. More of the Pfizer-BioNTech vaccine will arrive each week. And later this week, the FDA will decide whether to green-light the world’s second rigorously studied COVID-19 vaccine, made by Moderna Inc.

While the U.S. hopes for enough of both vaccines together to vaccinate 20 million people by the end of the month, there won’t be enough for the average person to get a shot until spring.

“This is the light at the end of the tunnel. But it’s a long tunnel,” New York Gov. Andrew Cuomo said.

Now the hurdle is to rapidly get vaccine into the arms of millions, not just doctors and nurses but other at-risk health workers such as janitors and food handlers — and then deliver a second dose three weeks later.

“We’re also in the middle of a surge, and it’s the holidays, and our health care workers have been working at an extraordinary pace,” said Sue Mashni, chief pharmacy officer at Mount Sinai Health System in New York City.

Plus, the shots can cause temporary fever, fatigue and aches as they rev up people’s immune systems, forcing hospitals to stagger employee vaccinations.

A wary public will be watching closely to see whether health workers embrace vaccinations. Just half of Americans say they want to get vaccinated, while about a quarter don’t and the rest are unsure, according to a recent poll by The Associated Press-NORC Center for Public Health Research.

The FDA, considered the world’s strictest medical regulator, said the Pfizer-BioNTech vaccine, which was developed at breakneck speed less than a year after the virus was identified, appears safe and strongly protective, and it laid out the data in a daylong public meeting last week for scientists and consumers alike to see.

“Please, people, when you look back in a year and you say to yourself, ‘Did I do the right thing?’ I hope you’ll be able to say, ‘Yes, because I looked at the evidence,’” Dr. Francis Collins, director of the National Institutes of Health, said Sunday on NBC’s “Meet the Press.” “People are dying right now. How could you possibly say, ‘Let’s wait and see’?”

Still, in winning approval for widespread emergency use, the vaccine was cleared before a final study in nearly 44,000 people is complete. That research is continuing to try to answer additional questions.

For example, while the vaccine is effective at preventing COVID-19 illness, it is not yet clear if it will stop the symptomless spread that accounts for half of all cases.

The shots still must be studied in children and during pregnancy. But the American College of Obstetricians and Gynecologists said Sunday that vaccination should not be withheld from pregnant women who otherwise would qualify.