Players Walk Off Over Racism Accusation in International Soccer Match 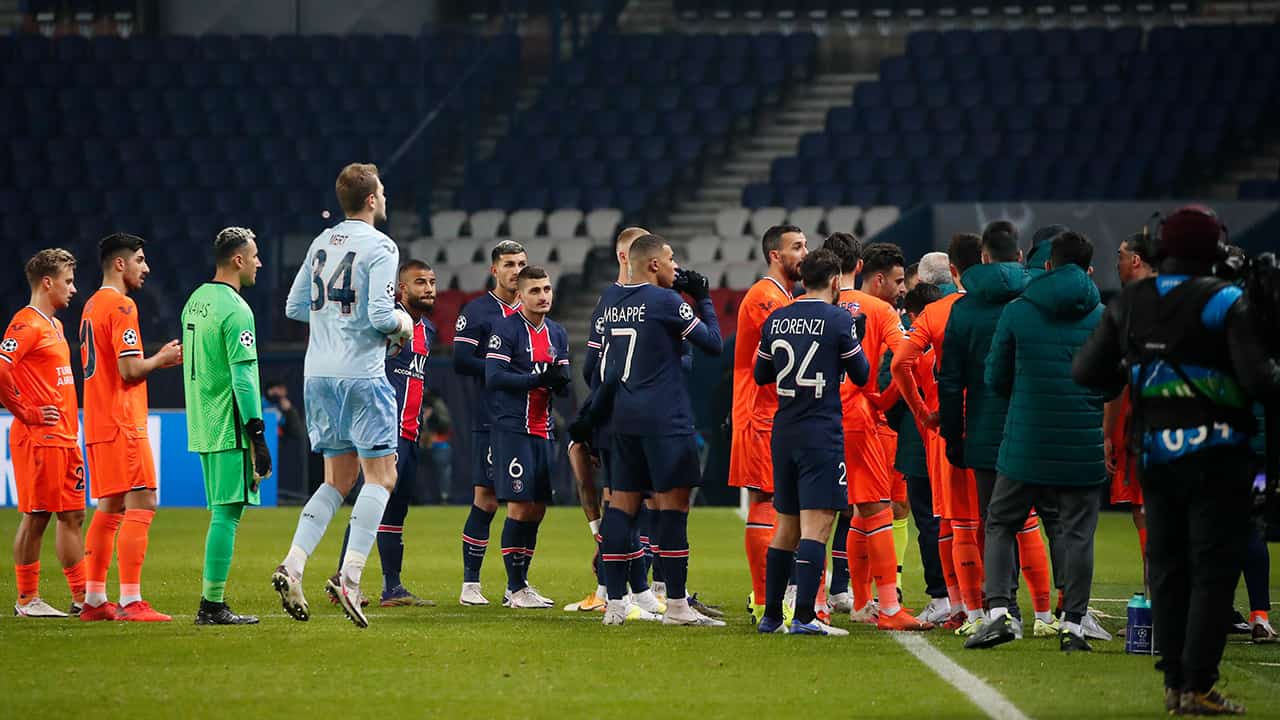 Players have taken a knee, unfurled slogans and demanded tougher action only to find soccer — their working environment — remains infected with racism.

The tipping point might just have come, with elite players in Paris taking the extraordinary step of refusing to continue playing.

At the end of a year of striking gestures against racial injustice and discrimination, the Champions League produced one of soccer’s most powerful shows of solidarity against racism on Tuesday when players from Paris Saint-Germain and Istanbul Basaksehir left the field and didn’t return.

“The walk off by both Basaksehir and PSG together lays down a marker in Europe,” Piara Powar, executive director of the anti-discrimination Fare network, told The Associated Press. “Many players are fed up with half measures to tackle racism and are more prepared than ever to exercise their right to stop a match.”

The flashpoint came 14 minutes into the game when the fourth official — Sebastian Coltescu of Romania — was accused of using a racial term to identify Basaksehir assistant coach Pierre Webo before sending him off for his conduct on the sidelines. Webo is Black.

“You are racist,” Basaksehir coach Okan Buruk said to Coltescu.

An enraged Webo demanded an explanation from Coltescu, repeating at least six times: “Why you say negro?”

The exchanges were broadcast live around the world from soccer’s biggest club competition.

“Why when you mention a Black guy, you have to say ‘This Black guy?’” asked Basaksehir substitute Demba Ba, who is Black.

Racism at Soccer Games Has Typically Come From the Stands

“Our colleagues at the Romanian state anti-discrimination organization have confirmed it is racist in Romanian to refer to a player by using his race as an identifier,” Powar said. “There is no ambiguity. This incident shows the need for much better training of match officials. Unintentional racism is still racism.”

Racism at soccer games has typically come from the stands, but matches in countries such as France are being played without fans because of the COVID-19 pandemic.

The high-profile incidents tend to highlight the inadequate responses, like in the Portuguese league in February.

Porto striker Moussa Marega tried to walk off the field after being the target of racist abuse from fans in a game against Guimarães and demanded to be substituted. But he faced attempts by his own teammates and opposing players to prevent him from leaving the field.

The referee then gave Marega a yellow card for refusing to continue in the game — the type of action that dissuades players from walking off.

The Romanian referee who was in charge of the game in Paris on Tuesday — Ovidiu Hategan — was in the same role for the 2013 Champions League game when Manchester City player Yaya Toure complained about the lack of action against monkey noises he heard from CSKA Moscow fans.

“If officials cannot set the standards by their own behavior,” Powar said, “they cannot be relied on to deal with racism on the pitch or in the stands.”

Referees have often been criticized for not leading players off the field, instead leaving them to take the decision themselves. England’s national team decided to continue playing a game in Montenegro last year after Callum Hudson-Odoi and Danny Rose were targeted with monkey chants.

The Champions League game in Paris will resume on Wednesday with a new refereeing team.

“The players walking off is a step in the right direction,” former Manchester United defender Rio Ferdinand said on Britain’s BT Sport television. “But it can’t just be left to them.”