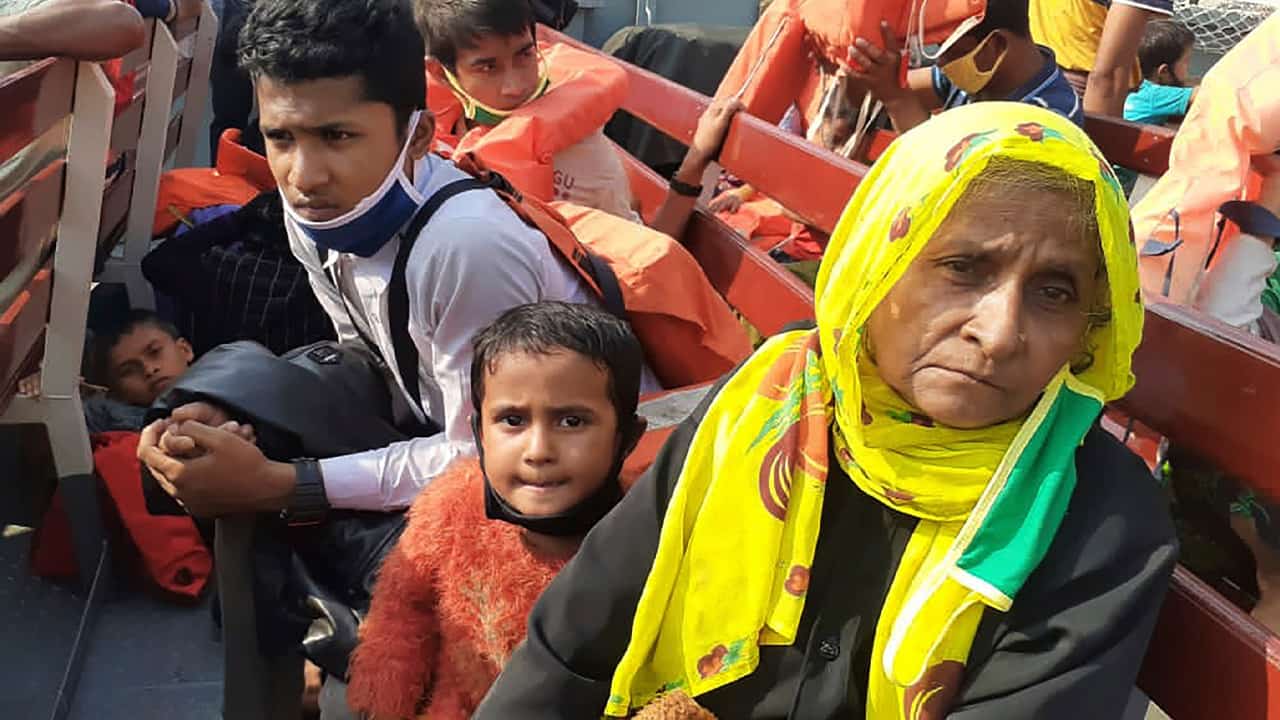 DHAKA, Bangladesh — Authorities in Bangladesh on Friday sent the first group of more than 1,500 Rohingya refugees to an isolated island despite calls by human rights groups for a halt to the process.

The 1,642 refugees boarded seven Bangladeshi naval vessels in the port of Chittagong for the trip to Bhashan Char, according to an official who could not be named in accordance with local practice.

After about a three-hour trip they arrived at the island, which was once regularly submerged by monsoon rains but now has flood protection embankments, houses, hospitals and mosques built at a cost of more than $112 million by the Bangladesh navy.

Located 21 miles from the mainland, the island surfaced only 20 years ago and was never inhabited.

Saleh Noman, a Bangladeshi journalist who traveled with the refugees, said by phone from the island that the refugees were given rice, eggs and chickens for lunch after their body temperatures were measured by health workers as a coronavirus precaution.

Before they boarded the ships they were also given face masks to protect against COVID-19.

The island’s facilities are built to accommodate 100,000 people, just a fraction of the million Rohingya Muslims who have fled waves of violent persecution in their native Myanmar and are currently living in crowded, squalid refugee camps in Cox’s Bazar district.

The United Nations has voiced concern that refugees be allowed to make a “free and informed decision” about whether to relocate to the island in the Bay of Bengal.

The director of infrastructure development on Bhashan Char, Commodore Abdullah Al Mamun Chowdhury, told reporters on the island that the international community has nothing to worry about regarding the safety of the refugees.

On Thursday, 11 Passenger Buses Carrying the Refugees Left Cox’s Bazar on the Way to the Island

He said he expects that the U.N. and others would be convinced about the overall arrangements after visiting the island. Asked when that would be, he answered that the government is working on it.

On Thursday, 11 passenger buses carrying the refugees left Cox’s Bazar on the way to the island. They camped overnight in school buildings in the southeastern city of Chittagong.

Authorities in Cox’s Bazar did not say how the refugees were selected for relocation.

About 700,000 Rohingya fled to the camps in Cox’s Bazar after August 2017, when the military in Buddhist-majority Myanmar began a harsh crackdown on the Muslim group following an attack by insurgents. The crackdown included rapes, killings and the torching of thousands of homes, and was termed ethnic cleansing by global rights groups and the U.N.

Foreign media have not been permitted to visit the island.

Contractors say its infrastructure is like a modern township, with multifamily concrete homes, schools, playgrounds and roads. It also has solar-power facilities, a water supply system and cyclone shelters.

International aid agencies and the U.N. have vehemently opposed the relocation since it was first proposed in 2015, expressing fear that a big storm could overwhelm the island and endanger thousands of lives.

The U.N. said in a statement Wednesday that it has not been involved in preparations for the relocation or the selection of refugees and has limited information about the overall plan.

“The United Nations takes this opportunity to highlight its longstanding position that Rohingya refugees must be able to make a free and informed decision about relocating to Bhasan Char based upon relevant, accurate and updated information,” it said.

Amnesty International and Human Rights Watch on Thursday urged the government to cancel the relocation plan.

The current refugee camps near the town of Cox’s Bazar are overcrowded and unhygienic. Disease and organized crime are rampant. Education is limited and refugees are not allowed to work.

Still, most Rohingya are unwilling to return to Myanmar due to safety concerns. Government officials didn’t have an estimate of how many refugees would be willing to be relocated to the island.

Prime Minister Sheikh Hasina has repeatedly told the U.N. and other international partners that her administration would consult them before making a final decision on the relocation, and that no refugees would be forced to move.

Bangladesh attempted to start sending refugees back to Myanmar under a bilateral framework last November, but no one was willing to go.

The Rohingya are not recognized as citizens in Myanmar, rendering them stateless, and face other forms of state-sanctioned discrimination.

A U.N.-sponsored investigation in 2018 recommended the prosecution of Myanmar’s top military commanders on charges of genocide, war crimes and crimes against humanity for the violence against the Rohingya.

Myanmar is defending itself in the International Court of Justice in the Hague, Netherlands, after the West African nation of Gambia brought a case backed by the Organization for Islamic Cooperation, Canada and the Netherlands over the crackdown.