Armenians Return to Nagorno-Karabakh After Cease-Fire 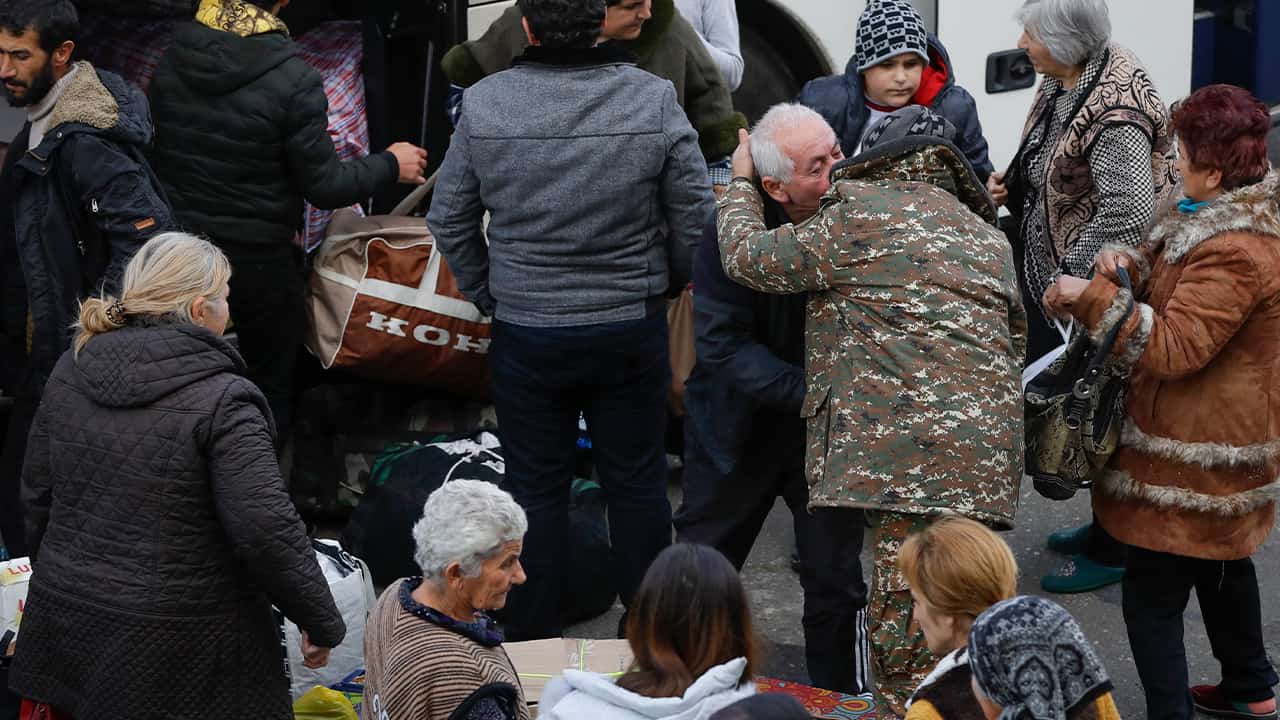 STEPANAKERT, Nagorno-Karabakh — Joyous scenes of smiles and hugs could be seen Tuesday on the main square of Stepanakert, the capital of Nagorno-Karabakh, as ethnic Armenians returned to their homeland a week after a cease-fire between Armenia and Azerbaijan halted the fighting that had raged over the separatist region for more than six weeks.

The Moscow-brokered truce called for territorial concessions in favor of Azerbaijan and left many Armenians bitter, but allowed those who fled from the violence to return to their homes.

“I feel great because I’m coming back to my sons,” said None Agasyan, whose two sons were injured during the fighting.

According to the Russian Defense Ministry, Russian peacekeepers deployed to the region in accordance with the cease-fire agreement have accompanied more than 1,200 people returning to Nagorno-Karabakh from Armenia since Saturday. Turkey’s parliament, meanwhile, granted President Recep Tayyip Erdogan’s government permission to deploy peacekeepers to Azerbaijan to monitor the cease-fire.

Nagorno-Karabakh lies within Azerbaijan but has been under the control of ethnic Armenian forces backed by Armenia since a separatist war there ended in 1994. That war left not only Nagorno-Karabakh itself but substantial surrounding territory in Armenian hands.

Heavy fighting that flared up Sept. 27 marked the biggest escalation of a decades-old conflict between Armenia and Azerbaijan, killing hundreds and possibly thousands of people.

The truce last week stipulated that Armenia turn over control of some areas its holds outside Nagorno-Karabakh’s borders to Azerbaijan. It halted the fighting after several failed attempts to establish a lasting cease-fire, but prompted mass protests in the Armenian capital Yerevan and calls for Armenian Prime Minister Nikol Pashinian’s ouster.

In a sign of the political crisis deepening, Foreign Minister Zohrab Mnatsakanyan resigned Monday after the ministry publicly contested Pashinian’s claims about the course of the peace talks. Another Cabinet member, Emergency Minister Feliks Tsolakyan, submitted his resignation on Tuesday.

On Monday evening, Armenian President Armen Sarkissian added to the pressure, saying in an address to the nation that holding an early election, which implies Pashinian stepping down, is “inevitable.”

But politics appeared far away from residential buildings of Stepanakert, where residents were unpacking their belongings after returning from Armenia.

Bela Khachateryan, a doctor at a maternity clinic, found her apartment in the region’s capital untouched by shelling, but without electricity or gas. Still, for Khachateryan, who came back to Stepanakert on Tuesday with her mother and daughters after nearly two months away, there is no place like home.

“Wherever we are staying, even with Armenians (in Yerevan), we’re drawn to here, to our home, to our city,” Khachateryan said after unpacking heavy bags with groceries she brought from Yerevan. “We are used to this place. We love our city.”

U.S. Secretary of State Mike Pompeo on Tuesday said the United States welcome the cease-fire and is providing $5 million in humanitarian assistance “to support the operations of the International Committee of the Red Cross and other international organization and non-governmental organization partners to assist people affected by the recent fighting.”

The assistance will go towards local efforts to provide food, health, shelter, and other emergency assistance to conflict-affected persons, Pompeo said.