The scourge of a global pandemic produced an election season like no other in the U.S., persuading record numbers of Americans to cast their ballots early, forcing states to make changes to long-established election procedures and leading to hundreds of lawsuits over how votes will be cast and which ballots will be counted.

Polls began opening Tuesday as election officials warned that millions of absentee ballots could slow the tallies, perhaps for days, in some key battleground states and as President Donald Trump threatened legal action to prevent ballots from being counted after Election Day.

Related Story: When Will Your Ballot Be Counted? The Perks of Voting Early.

Amid the tumult, tens of millions of Americans heeded warnings to act early, prompted by concerns over Postal Service delays and worries about the virus spreading through crowded polling places.

“Come hell or high water,” said Kristen Clarke, executive director of the Lawyers’ Committee for Civil Rights Under Law. “It feels like that has been the attitude voters have needed to make sure their voices are heard this year.”

At least 98.8 million people voted before Election Day, about 71 percent of the nearly 139 million ballots cast during the 2016 presidential election, according to data collected by The Associated Press. Given that a few states, including Texas, had already exceeded their total 2016 vote count, experts were predicting record turnout this year.

Problems occur every election, and Tuesday was no different. There were long lines early in the day and sporadic reports of polling places opening late and equipment issues. This was all expected given past experience, the decentralized nature of voting in the U.S. and last-minute changes due to the pandemic.

Those yet to vote headed to polling places despite another spike in COVID-19 cases that has hit much of the country. Democrat Joe Biden’s campaign had emphasized early voting due to the pandemic. Among those braving the polls were voters who may have wanted to vote by mail but waited too long to request a ballot or those who didn’t receive their ballots in time.

Others were likely persuaded by the president’s rhetoric attacking mail voting or simply preferred to vote in person. 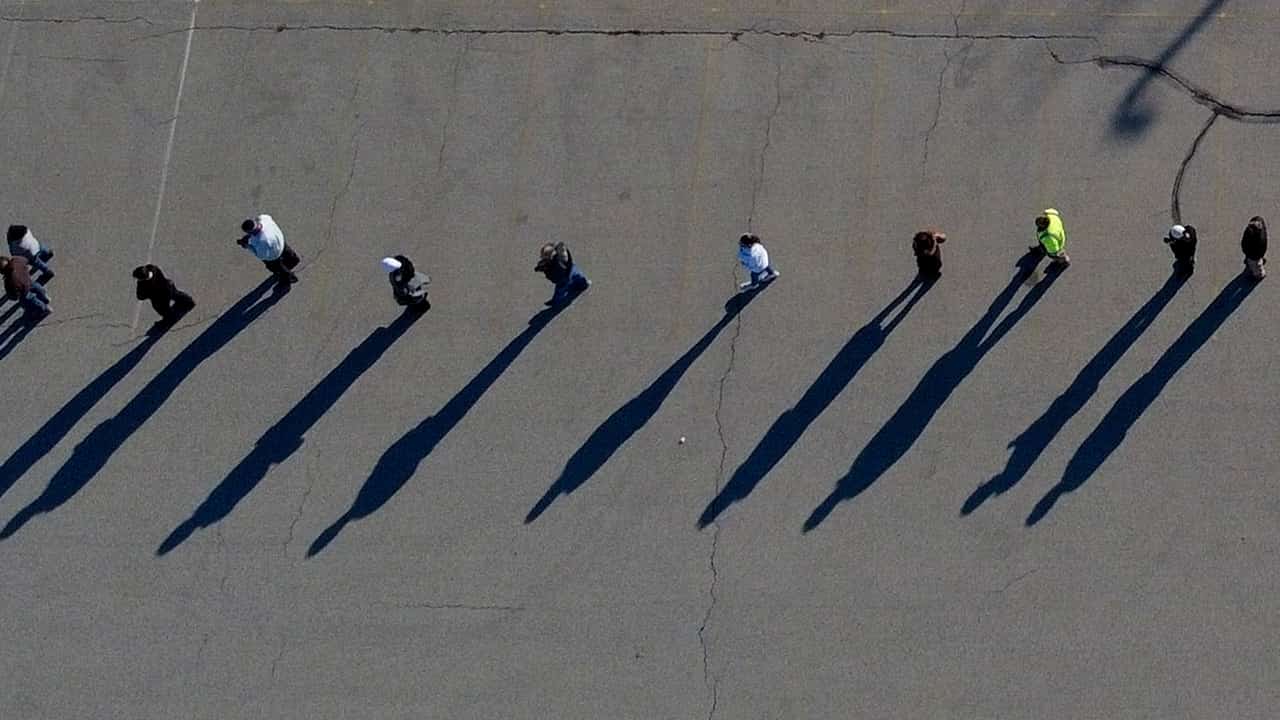 “I don’t want to see no mailman. I like to stand here, see my own people, wait in the line and do my civil duty,” said James “Sekou” Jenkins, a 68 year-old retired carpenter and mechanic who waited about 15 minutes before polls opened in West Philadelphia and voted for Biden about an hour later.

With Democrats dominating the early vote, Republicans were expected to comprise a large share of Tuesday’s voting.

In the months leading up to Election Day, election officials had to deal with a pandemic that has infected more than 9 million Americans and killed more than 230,000, forcing them to make systemic changes largely on the fly and mostly without federal money. Meanwhile, Trump repeatedly sought to undermine the election with unsubstantiated claims of widespread voter fraud.

He has particularly targeted the crucial battleground state of Pennsylvania, after the U.S. Supreme Court allowed — at least for now — a three-day extension for receiving and counting absentee ballots. Over the weekend, Trump said that as soon as the polls close there on Tuesday, “We’re going in with our lawyers.”

Misinformation about election procedures, concerns about confrontations at the polls and reports of mail slowdowns also clouded the run-up to Election Day.

“The eyes of the American public and the world are on election officials as we administer free and fair elections during this unprecedented time,” said New Mexico Secretary of State Maggie Toulouse Oliver, who also is president of the National Association of Secretaries of State. “Rest assured, we are ready. We have coordinated with all levels of government and are in constant communication to ensure a smooth election.”

The group has been working with the National Association of State Election Directors to help states hammer out plans for protecting against foreign and domestic cyberattacks, countering misinformation and strengthening an election infrastructure tested by massive early voting and pandemic precautions.

Federal authorities were monitoring voting and any threats to the election across the country at an operations center just outside Washington D.C. run by the cybersecurity arm of the Department of Homeland Security. Officials there said there were no major problems detected early Tuesday but urged the public to be patient and skeptical in the days ahead.

“We’re not out of the woods yet,” said Christopher Krebs, the director of the U.S. Cybersecurity and Infrastructure Security Agency. “Today, in some sense, is half-time. There may be other events or activities or efforts to interfere and undermine confidence in the election. So I’d ask all Americans to be patient, to treat all sensational and unverified claims with skepticism, and remember technology sometimes fails and breaks.”

Election officials across some 10,000 voting jurisdictions scrambled to purchase personal-protective equipment, find larger polling places, replace veteran poll workers who opted to sit out this year’s election due to health concerns and add temporary workers to deal with the avalanche of mail ballots.

Most states, even ones with broad mask mandates, stopped short of forcing voters to wear them at the polls. Instead, they urged voters to don masks while providing options for those who refused.

“Ten thousand election officials, locals to every community in the country, have shifted on a dime and planned this election in record time and are working very hard to count every legitimate ballot,” said Noah Praetz, a former election official in Illinois who has been helping election offices adapt their processes this year. “They are catching rare incidents of bad behavior, and they are ensuring the integrity of this election.” 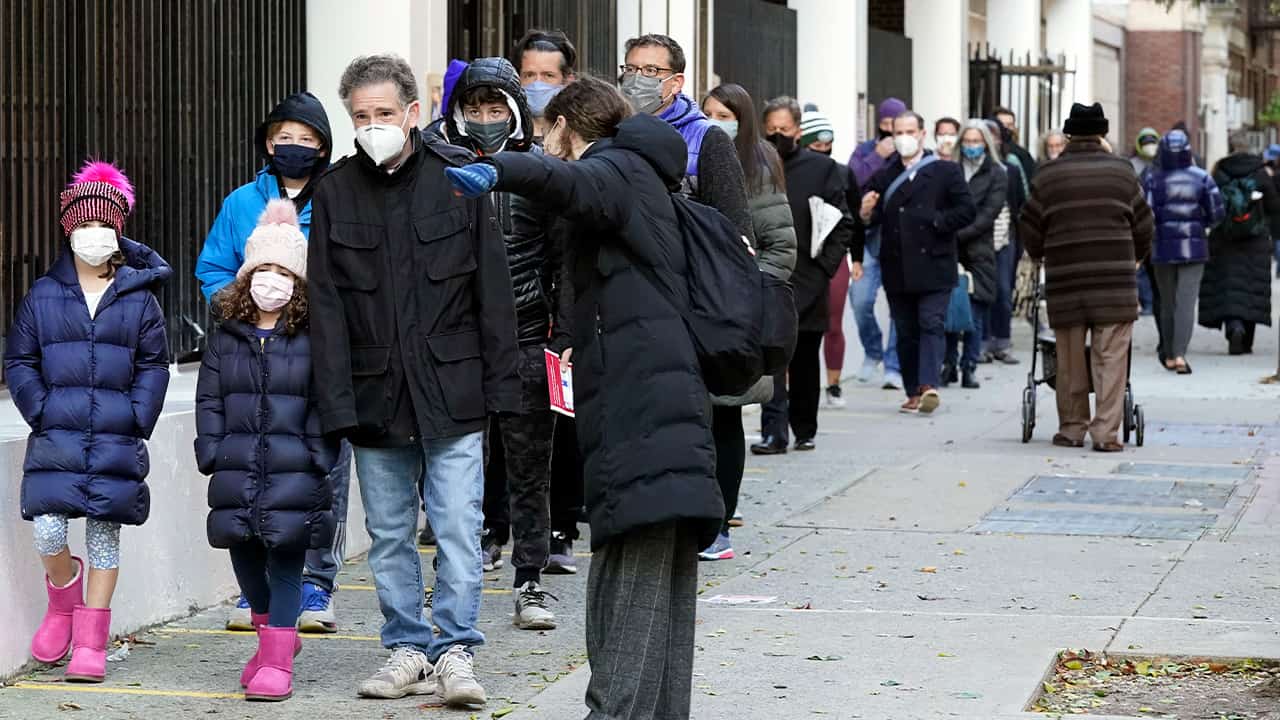 Election Officials Have Emphasized That While Long Lines Are Not Acceptable, It Does Not Mean There Has Been Any Sort of Widespread Failure

Lines already extended by social-distancing rules could get worse if large numbers of voters who requested a mail ballot show up at the polls after deciding they would rather vote in person.

In some states, those voters will be required to cast a provisional ballot — one that ultimately will be counted if the voter is eligible and did not previously vote. But this also triggers a lengthier check-in process, leading to delays. Millions of absentee ballots were still outstanding as of Monday, including 1.3 million in Florida and 700,000 in Pennsylvania.

Related Story: With Record Number of Local Ballots Flooding In, When Will Vote Results Be ...

Election officials have emphasized that while long lines are not acceptable, it does not mean there has been any sort of widespread failure. They also warned that isolated incidents of voter intimidation were possible given the level of political rancor this year, but that safeguards are in place and voters should not be concerned about casting a ballot in person.

“There is a lot to be angry about and to fix after Election Day,” said Wendy Weiser, director of the democracy program at the Brennan Center for Justice. “But despite those unprecedented strains, the system was able to pull it together and accommodate this incredible surge in voting. That required a lot of ingenuity, commitment to democracy and hard work, especially by our election officials.”