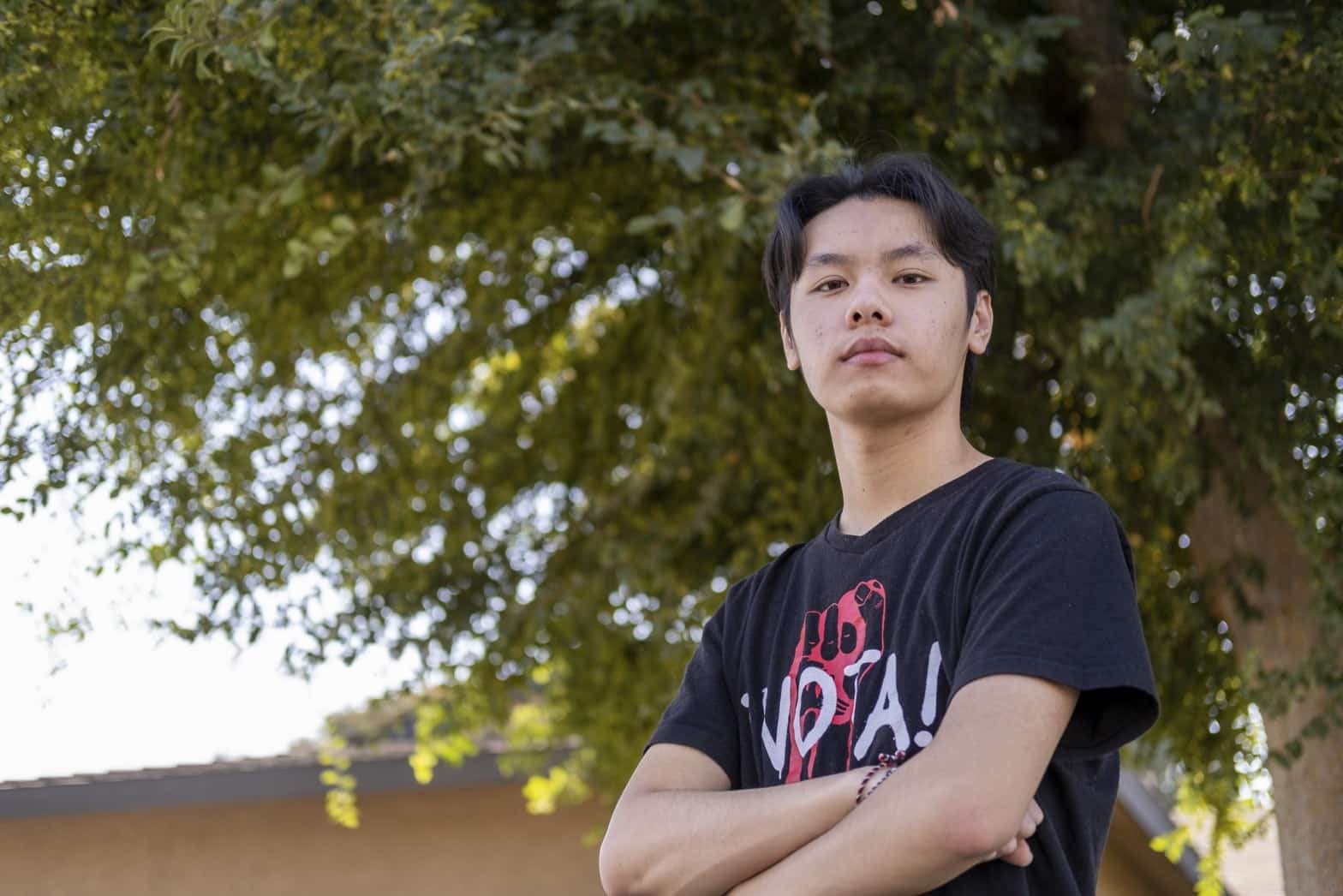 The moment he stepped into Clovis High School, Chali Lee — now a first-year at Clovis Community College — left his Hmong identity outside its doors.

Other students, he said, saw him as just another Asian male, another model minority — someone taking up all the seats at colleges. Lee knows it’s not that simple.

“Although I am Asian, I carry the term Southeast Asian,” he said. “You have to disaggregate the data and look at the dangers of using umbrella terms — in the Hmong community specifically, not many pursue higher education.”

Next week, Californians will vote on Proposition 16, which would allow public colleges to once again consider race, gender and ethnicity in admissions and hiring.

But some Asian American students and academics say they have been unfairly lumped together in discussions around affirmative action. The model minority myth, they say, obscures different Asian American ethnic communities’ varied access to resources and education.

Asian Americans have been at the center of affirmative action debates in California and nationwide. In Students for Fair Admissions v. Harvard, the court case that upheld the university’s affirmative action policies in 2019 and is now being heard by a federal appeals court, the plaintiffs are Asian-American students who said they were discriminated against in the admission process.

While Prop. 16 Made It on This Year’s Ballot, It Still Faces Opposition From Some Asian American Groups

And in 2014, when California legislators last tried reviving affirmative action, three Chinese-American state senators who initially backed its reinstatement received thousands of messages from constituents urging them to withdraw their support.

“As lifelong advocates for the Asian American and other communities, we would never support a policy that we believed would negatively impact our children,” the Democratic  senators — Ted Lieu, Carol Liu and Leland Yee — wrote in a letter to then-Assembly Speaker John Pérez. The lobbying campaign worked, and the bill died.

While Prop. 16 made it on this year’s ballot, it still faces opposition from some Asian American groups. Assemblymember Evan Low, a Cupertino Democrat, said on the assembly floor that he supported the ballot measure because it’s difficult to tackle race-specific problems with race-neutral policies — but he’d received over 3,000 messages from his constituents opposing the measure, compared to 99 messages in support.

Low, who is Chinese American, said elected officials in his district told him: “Aren’t you yellow? Why are you voting against your own people? Why are you betraying us?”

Some of those different opinions are shaped by ethnicity and geography’s impact on Asian-Americans’ educational opportunities. While 54% of Asians in California have a bachelor’s degree or higher, the number is lower in every Central Valley county. Only 24% of Hmong adults had a bachelor’s degree in 2019, compared to 74% of Asian Indians.

The University of California has tracked enrollment and retention data for 18 Asian sub-groups since the mid-2000s, after a student-led movement, Count Me In, pushed for disaggregated Asian and Pacific Islander student data.

“For instance, a Cambodian student association could say, ‘Okay, here’s how many Cambodian American students applied to the university. Here’s how many got in, how many are on campus and what the retention challenges are that might need addressing,’” Poon said.

Asians and Asian Americans were 39% of UC’s student body in 2019, far more than their 15.5% share of California’s population.

But the data that emerged as a result of the Count Me In campaign complicates that narrative of Asian-American overrepresentation. In 2019, there were only 534 Hmong students out of the 120,000 Asian American students at UCs — even though California’s Hmong population, at more than 100,000, is the highest nationwide.

Seng Alexander Vang, a lecturer at Cal State Stanislaus and UC Merced, said his parents were among the first wave of Hmong refugees entering America after the Secret War in the ‘80s.

“In Laos and Thailand, when we were in the refugee camps, [my parents] never got the opportunity for education,” he said. “They were placed in job training and English classes, but it was very difficult for them to read and write a new language because they never had schools.”

Vang’s parents provided emotional support and wanted him to go to school, but didn’t know how to help him with homework and extracurricular activities. So he only applied to one university — Cal State Stanislaus — and said he wasn’t prepared to go to a four-year school.

“It was a struggle to the point where I didn’t feel like I was good enough,” Vang said. “Today, students, to just get into a UC, they need half a dozen AP classes, a 4.0+ (GPA) — and I barely passed my high school by one class.”

Vang, who teaches Hmong studies classes at Stanislaus, said he wanted to become a professor because he saw himself in students of color who had potential but didn’t feel understood or heard by their teachers.

“When you talk about race and ethnicity, they’ve become uncomfortable, because they’ve been taught not to talk about race,” he said. “But then they learn about (affirmative action) and realize that no, actually, colorblindness is harmful — it’s like you’re erasing people by saying you don’t see color.”

Vang, who voted yes on Prop. 16, said it’s important for students to be aware about racism today, because education can make it seem like racism no longer exists.

“They think we had the civil rights movement and it was all peaceful protest — but it wasn’t just that, it was violent,” Vang said. “There are conflicts between communities of color — there’s so much anti-Blackness in the Hmong community, because it’s something people learn as they assimilate and become Americanized.” 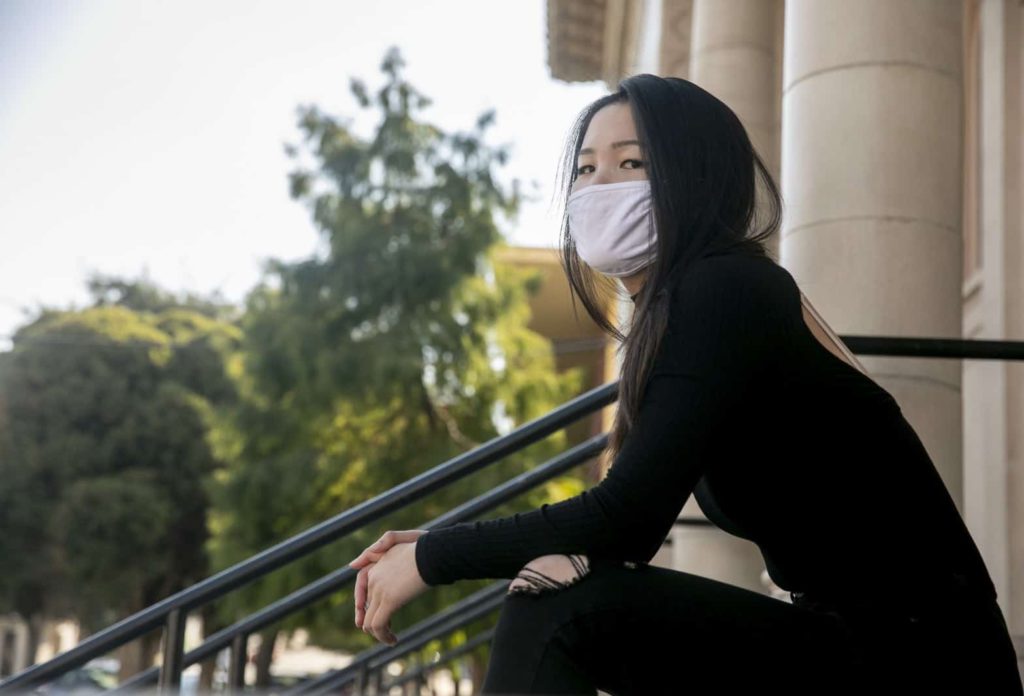 Breanne Yee, 19, a third year student at Cal State Long Beach, sits for a portrait at the Sunset District library near her parents’ San Francisco home. Yee says investing in community programs is a better way to fight inequality than affirmative action. (Photo by Anne Wernikoff for CalMatters)

The model minority myth, adds Poon, is rooted in anti-Blackness and a desire to show racism no longer exists in America.

“It’s a way to say without saying that Black, Latinx and Indigenous people, if they work hard like Asian Americans, maybe calls around racism are overblown,” she said. “But with anti-Asian coded racism, the Black Lives Matter movement, police killings on screen all the time — they know that racism is real.”

Affirmative action, she said, is a policy tool for public institutions to acknowledge the  existence of racism, sexism and patriarchy and to combat them.

But some Asian American students say that affirmative action isn’t the best way to help communities of color.

Sunjay Muralitharan, a junior at Washington High School involved with Californians for Equal Rights, which encourages a No vote on Prop. 16, said Prop. 16 is racist.
“Prop. 16 assumes that minorities like the Asian community and other communities won’t be able to get into a high-level institution without this upper-hand,” he said. “I think we need to shift the focus to more of a socioeconomic viewpoint than a racial standpoint.”

Though he admires Prop. 16’s proponents for diagnosing systemic racism and misogyny as problems, Muralitharan said the policy wouldn’t solve those underlying issues.

“We should focus on giving disadvantaged minorities the tools they need to succeed,” he said. “I support things like universal basic income, so people can pay off rent or get tutoring.”

For Breanne Yee, a third-year student at CSU Long Beach, passing laws isn’t the only way to combat racial injustice.

“Elections are important, but investing in the community is just as, if not more, important,” Yee said.

Seventy percent of Asian American registered voters nationwide said they supported affirmative action, according to a 2020 AAPI Data survey — a 2% increase from 2014. Still, that hides divisions among ethnicities, with only 56% of Chinese American voters in favor compared to 86% of Asian Indians.

Two polls released in the past week by the Public Policy Institute of California and the Berkeley Institute of Governmental Studies show fewer than 40% of likely voters plan voting yes on Prop. 16, with about half saying they’ll vote against. Lee, the Clovis Community College student, said he recently had a conversation with one of his classmates who felt that there weren’t enough opportunities for white folks anymore.

But he said that’s exactly the narrative he hopes to disrupt in supporting Prop. 16.

“Many white people — even without affirmative action — have tutors, their parents have attended college before, have graduated from college,” Lee said. “Their chances of getting into UC are much, much, much higher — just because me and other Southeast Asians come from a disenfranchised community doesn’t mean we automatically get into a UC.”

And whether or not Prop. 16 passes, Lee said that there’s still work to be done to ensure students of color can thrive after being admitted to college.

“It’s one thing to get in and have these systems help us,” Lee said. “It’s another to make sure that students who were able to get a seat at the table also get resources that they need.”

Janelle Marie Salanga is a fellow with the CalMatters College Journalism Network, a collaboration between CalMatters and student journalists from across California. This story and other higher education coverage are supported by the College Futures Foundation.