YEREVAN, Armenia — Deadly fighting between Armenian and Azerbaijani forces over the separatist region of Nagorno-Karabakh showed no signs of abating Wednesday despite a U.S.-brokered cease-fire that took force just two days ago and has so far failed to halt the flare-up of a decades-old conflict.

Nagorno-Karabakh officials said Azerbaijani forces hit Stepanakert, the region’s capital, and the nearby town of Shushi with Smerch long-range multiple rocket systems, a devastating Soviet-designed weapon intended to ravage wide areas with explosives and cluster munitions. One civilian was killed in Shushi and two more were wounded, officials said.

The Azerbaijani Defense Ministry rejected all the accusations and in turn accused Armenian forces of using the Smerch multiple rocket system to fire at the Azerbaijani towns of Terter and Barda. The strike on Barda killed more than 20 people and wounded 60, Azerbaijani officials said.

Azerbaijani President Ilham Aliyev promised on Twitter a “befitting response” for the strike.

According to Nagorno-Karabakh Officials, 1,068 of Their Troops and 39 Civilians Have Been Killed

The latest fighting, which began Sept. 27, has involved heavy artillery, rockets and drones, in the largest escalation of hostilities over the separatist region in the quarter-century since the war ended. Hundreds, and possibly thousands of people, have been killed in the fighting.

The deadly clashes continued for over a month despite numerous calls for peace and three attempts at establishing a cease-fire. The latest truce began Monday, after talks facilitated by the United States, and came after two failed attempts by Russia to broker a lasting truce. All three cease-fire agreements were immediately challenged by reports of violations from both sides.

Russian President Vladimir Putin said last week that, according to Moscow’s information, the death toll from the fighting was nearing 5,000, significantly higher than what both sides report.

Russia, the United States and France have co-chaired the so-called Minsk Group set up by the Organization for Security and Cooperation in Europe to mediate the conflict, but their attempts to negotiate a political settlement have stalled. 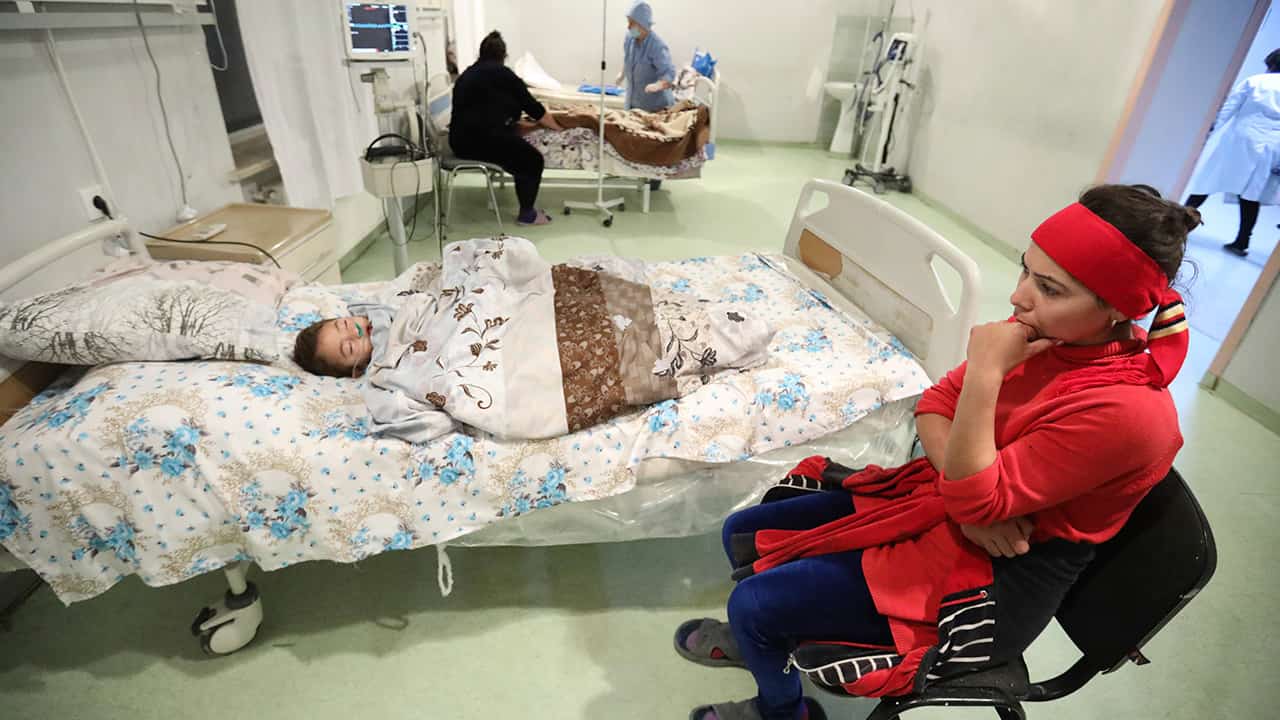 A woman sits next to her wounded child during shelling by Armenian forces daughter at a hospital in Barda, Azerbaijan, Tuesday, Oct. 27, 2020. Fighting over Nagorno-Karabakh is raging, unimpeded by a U.S.-brokered cease-fire, while Armenia and Azerbaijan are trading blame for the deal’s quick unraveling. (AP Photo/Aziz Karimov)

Aliyev has repeatedly criticized the Minsk Group for not producing any progress in three decades and insisted that Azerbaijan has the right to reclaim its territory by force since international mediation has failed.

The Minsk Group’s co-chairs are set to meet with the foreign ministers of Azerbaijan and Armenia in Geneva on Thursday, but prospects for progress appear dim.

Turkey, which has thrown its weight behind Azerbaijan in the conflict, has sought to take a more prominent role in the peace talks — something Armenia has vehemently opposed.

Turkish President Recep Tayyip Erdogan told his ruling party’s legislators Wednesday that during a phone conversation with Putin the day before, he proposed that Ankara and Moscow work together to resolve the conflict by using their influence on the Azerbaijani and Armenian leaders.

“If you want, we can solve this issue together,” Erdogan said, recounting his conversation with Putin. “You hold talks with (Armenian Prime Minister Nikol) Pashinian, and let me hold discussions with my brother Ilham (Aliyev). Let’s bring this issue to a sweet end.”

Erdogan did not relay Putin’s response to his suggestion.

The proposal was not mentioned in the Kremlin’s readout of the call. Kremlin spokesman Dmitry Peskov said on Tuesday that only Armenia and Azerbaijan can decide on whether to involve Turkey in peace talks or not.

Russia, which has a military base in Armenia and a security agreement to protect its ally, has been involved in a delicate diplomatic game while trying to also maintain good ties with Azerbaijan and avoid a showdown with Turkey.