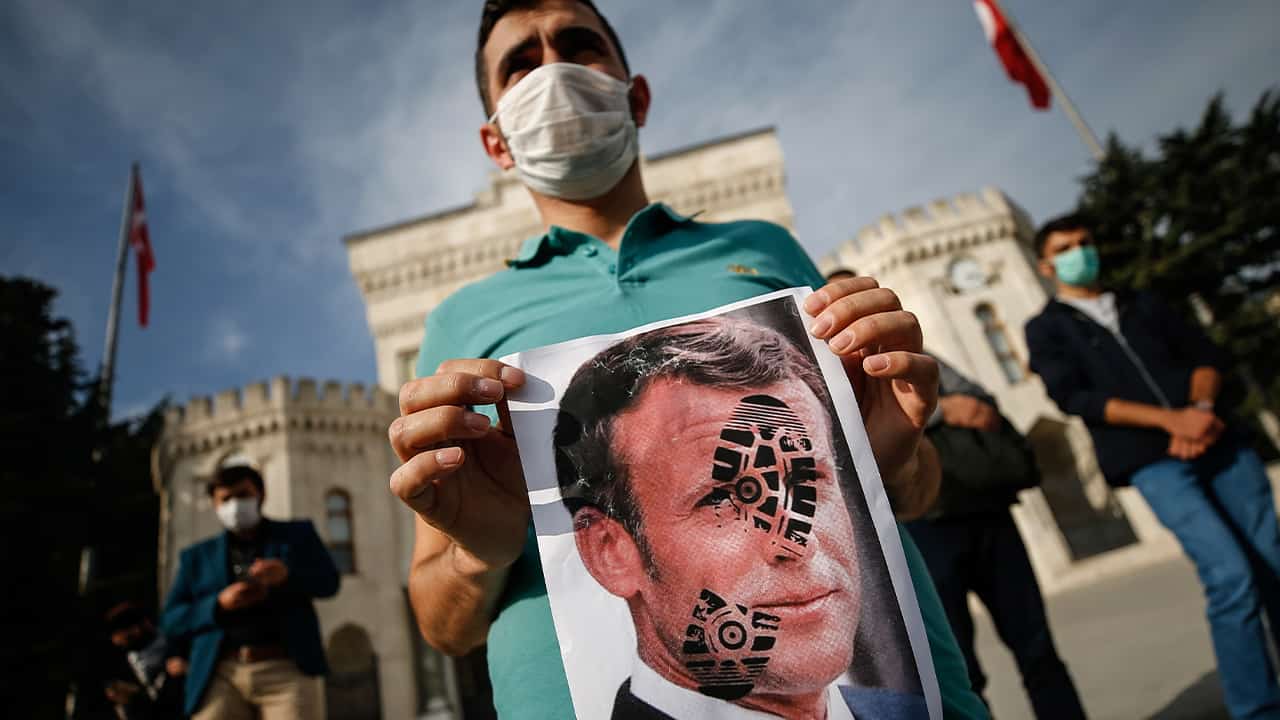 DUBAI, United Arab Emirates — Muslims in the Middle East and beyond on Monday broadened their calls for boycotts of French products and protests, as a clash over depictions of the Prophet Muhammad and the limits of free speech intensified.

Kuwaiti stores pulled French yogurts and bottles of sparkling water from their shelves, Qatar University canceled a French culture week, and calls to stay away from the Carrefour grocery store chain were trending on social media in Saudi Arabia and the United Arab Emirates. Protests have been held in Turkey and the Gaza Strip and are being planned in Pakistan.

The beheading earlier this month of a French teacher who had shown caricatures of the prophet in class has once again ignited a debate over such depictions — which Muslims consider blasphemous. The growing confrontation is raising political tensions between France and some Muslim-majority nations and could put pressure on French companies.

The teacher, who was killed by an 18-year-old Chechen refugee, has been heralded at home as a national symbol of France’s dearly-held secular ideals and its rejection of any whiff of religious intrusion in public spheres.

French President Emmanuel Macron has vigorously defended such depictions as protected under the right to free speech. At a memorial for the teacher last week, Macron said: “We won’t renounce the caricatures.”

On Sunday, he appeared to double down. In tweets published in both Arabic and English, he wrote: “We will not give in, ever.” He added, however, that France does not accept hate speech and respects all differences. Demonstrators chant slogans during an anti-France protest in Istanbul, Sunday, Oct. 25, 2020. Turkish President Recep Tayyip Erdogan on Sunday challenged the United States to impose sanctions against his country while also launching a second attack on French President Emmanuel Macron. Speaking a day after he suggested Macron needed mental health treatment because of his attitude to Islam and Muslims, which prompted France to recall its ambassador to Ankara, Erdogan took aim at foreign critics. (AP Photo/Emrah Gurel)

His government plans a bill aimed at rooting out what Macron calls “Islamist separatism,” which he contends has created a parallel culture in France, one that rejects French laws and norms. While he blamed some of this separatism on France’s brutal colonial past in North Africa, he was quoted as saying Islam is “a religion that is in crisis all over the world” and that Muslim positions are “hardening.”

Macron’s stance has drawn anger from both everyday people and some political leaders in the Muslim world.

On Monday, hashtags in Arabic on Twitter calling for French boycotts were trending high. Qatar University postponed its French cultural week indefinitely, saying its administration views insults to Islam and its symbols as unacceptable.

In Kuwait, a number of stores had removed French products like Kiri cheese, Perrier sparkling water and Activia yogurt from their shelves.

The owner of Carrefour stores in the Middle East issued a statement saying the brand is a fully owned and operated business of the United Arab Emirates-based Majid Al Futtaim. The company said it understands there is some concern among consumers across the region but noted that it employs 37,000 people and is “proud to be from the region and for the region.”

Others on Twitter criticized what they said is France’s hypocrisy and bias against Muslims. One cartoon widely shared put forth the argument that caricatures of Muslims are defended in “The West” as fair game under freedom of speech protections, while caricatures of Jews are labeled hate speech.

In France, a law aimed at addressing the country’s role during Nazi occupation specifically mentions that anti-Semitism and Holocaust denial are crimes, but it can also be used to prosecute anti-Muslim discrimination — or hate speech, in general. A notice calling for a boycott French products is displayed at a supermarket in Sanaa, Yemen, Monday, Oct. 26, 2020. Muslims in the Middle East and beyond on Monday called for boycotts of French products and for protests over caricatures of the Prophet Muhammad they deem insulting and blasphemous, but France’s president has vowed his country will not back down from its secular ideals and defense of free speech. (AP Photo/Hani Mohammed)

Egypt’s top cleric, Sheikh Ahmed el-Tayeb, who is also the Grand Imam of Al-Azhar, Sunni Islam’s highest seat of learning, condemned what he said was a systematic campaign aimed at dragging Islam into political conflicts and discord.

Turkish President Recep Tayyip Erdogan has been the most vocal on the political front, saying Macron needed his head examined and had lost his way. France responded by recalling its ambassador to Turkey.

Amid the political barbs, neither Erdogan nor Khan has publicly condemned the killing of the French teacher.

While many Muslims lament the expectation that they must condemn terrorist attacks they see as having nothing to do with Islam or its values, the general secretariat of the 57-nation Organization of Islamic Cooperation was among several bodies and groups that have denounced the killing.

Some intellectuals in the Muslim world have questioned those who are only outraged by the cartoons: Diana Moukalled, a Lebanese writer and co-editor of the independent Daraj news site, criticized how some people appear to be more offended by the cartoons than by the beheading of the French teacher.

Muslim scholars have condemned the caricatures, but some also sought to curb swelling anger.

Saudi Arabia’s senior council of clerics issued a statement saying that defamation of the Prophet Muhammad only serves extremists who want to spread hatred. While denouncing insults against Islam, the clerics also cited the prophet’s “mercy, justice, tolerance” in their statement.

The Trial Over the Newsroom Massacre Is Currently Underway in Paris

The head of the Saudi-based Muslim World League, Sheikh Mohammed al-Issa, told a Saudi news channel that while caricatures of the Prophet Muhammad are insulting to Muslims, the prophet’s influence and status are greater than any impact from such drawings. He said Muslims should not overreact, and that the prophet himself faced insults much worse in his lifetime but showed Muslims the right way to act with patience and manners.

It’s certainly not the first time France has grappled with terrorism — or with questions about free speech. Five years ago, French-born al-Qaida extremists killed 12 employees of the satirical weekly Charlie Hebdo in response to its publication of caricatures depicting the Prophet Muhammad. Those cartoons also sparked mass protests in Muslim-majority countries, with some turning deadly.

The trial over the newsroom massacre is currently underway in Paris.

Already, a small rally was held Monday in the Gaza Strip outside the French cultural center with people carrying banners showing photos of Maron with an “X” over his face. They held banners that read: “Despite Macron’s malice, we prevail for our Prophet”.

In Pakistan, the leader of a radical Islamic party called on people to hold a rally against France on Friday in the eastern city of Lahore to mark the Prophet Muhammad’s birthday, which is traditionally a time of celebration.

Meanwhile, groups ranging from the Taliban in Afghanistan to Hezbollah in Lebanon have condemned Macron’s defense of caricatures depicting the Prophet Muhammad.

US to Get 9th Justice With Dems Powerless to Block Barrett