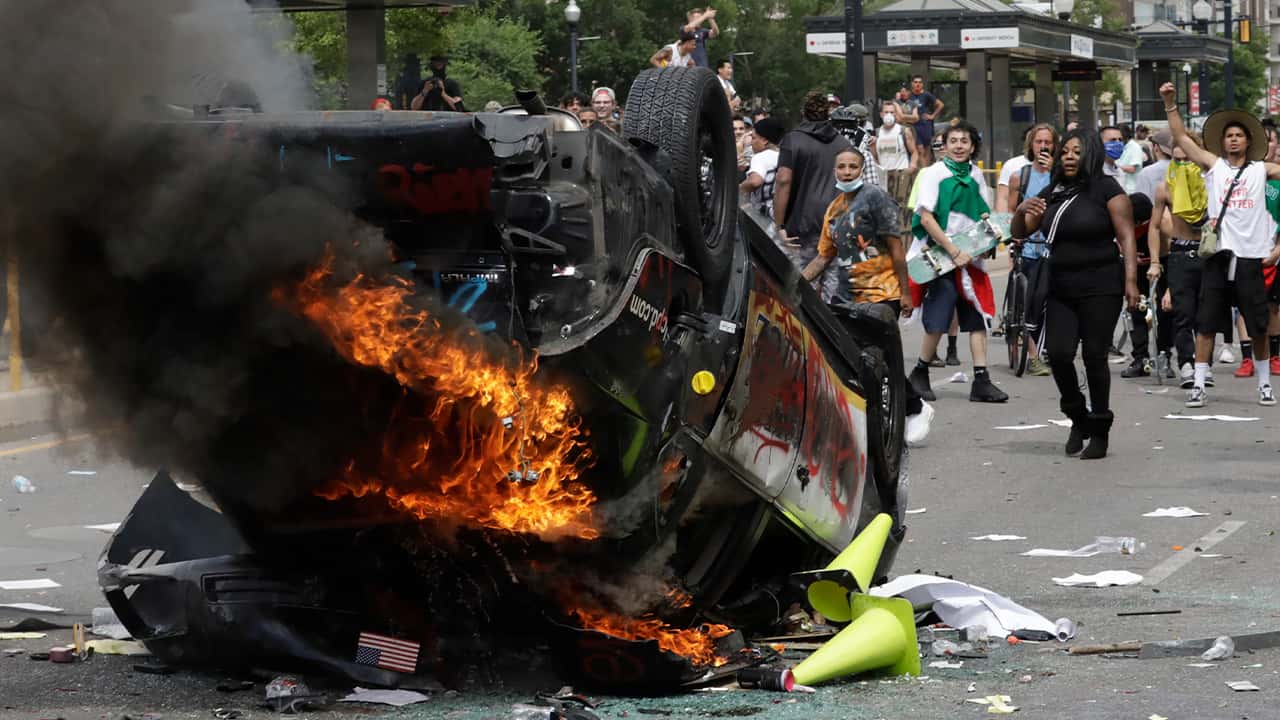 Very few of those charged appear to be affiliated with highly organized extremist groups, and many are young suburban adults from the very neighborhoods Trump vows to protect from the violence in his reelection push to win support from the suburbs.

Very few of those charged appear to be affiliated with highly organized extremist groups, and many are young suburban adults from the very neighborhoods Trump vows to protect from the violence in his reelection push to win support from the suburbs.

Attorney General William Barr has urged his prosecutors to bring federal charges on protesters who cause violence and has suggested that rarely used sedition charges could apply. And the Department of Justice has pushed for detention even as prisons across the U.S. were releasing high-risk inmates because of COVID-19 and prosecutors had been told to consider the risks of incarceration during a pandemic when seeking detention.

Defense attorneys and civil rights activists are questioning why the Department of Justice has taken on cases to begin with. They say most belong in state court, where defendants typically get much lighter sentences. And they argue federal authorities appear to be cracking down on protesters in an effort to stymie demonstrations.

“It is highly unusual, and without precedent in recent American history,” said Ron Kuby, a longtime attorney who isn’t involved in the cases but has represented scores of clients over the years in protest-related incidents. “Almost all of the conduct that’s being charged is conduct that, when it occurs, is prosecuted at the state and local level.”

In one case in Utah, where a police car was burned, federal prosecutors had to defend why they were bringing arson charges in federal court. They said it was appropriate because the patrol car was used in interstate commerce.

Not to say there hasn’t been violence. Other police cars have been set on fire. Officers have been injured and blinded. Windows have been smashed, stores looted, businesses destroyed.

Some of those facing charges undoubtedly share far-left and anti-government views. Far-right protesters also have been arrested and charged. Some defendants have driven to protests from out of state. Some have criminal records and were illegally carrying weapons. Others are accused of using the protests as an opportunity to steal or create havoc.

But many have had no previous run-ins with the law and no apparent ties to antifa, the umbrella term for leftist militant groups that Trump has said he wants to declare a terrorist organization.

Even though most of the demonstrations have been peaceful, Trump has made “law and order” a major part of his reelection campaign, casting the protests as lawless and violent in mostly Democratic cities he says have done nothing to stymie the mayhem. If the cities refuse to properly clamp down, he says, the federal government has to step in.

In dozens of cases, the government has pushed to keep the protesters behind bars while they await their trials amid the COVID-19 pandemic, which has killed more than 220,000 people across the U.S. There have been more than 16,000 positive cases in the federal prison system, according to a tracker compiled by the AP and The Marshall Project.

In some cases, prosecutors have gone so far as appealing judge’s orders to release defendants. Pre-trial detention generally is reserved only for people who are clearly dangers to the community or a risk of fleeing.

In Texas, Magistrate Judge Andrew Austin repeatedly challenged the prosecutor to explain why Cyril Lartigue, who authorities say was caught on camera making a Molotov cocktail, should be behind bars while he awaits his trial. Lartigue, of Cedar Park, described his actions that night as a “flash of stupidity,” prosecutors said.

Prosecutors Have Provided Little Evidence of Any Affiliations They Have With Organized Extremist Groups.

The 25-year-old lives with his parents in the Austin suburb and had never been in trouble with the law before and wasn’t a member of a violent group.

The judge said there are lot of people “who do something stupid that’s dangerous that we don’t even consider detaining.”

“I’m frustrated because I don’t think this is a hard case,” the judge said. “I have defendants in here with significant criminal histories that the government agrees to release.”

“We have no evidence of him — at least that’s been given to me — being a radical or a member of a group that advocates violence toward the police or others. We’ve got no criminal history. … What evidence is there that he’s a danger to society?” the judge asked.

The judge allowed Lartigue to stay out of jail.

While some of the defendants clearly hold radical or anti-government beliefs, prosecutors have provided little evidence of any affiliations they have with organized extremist groups.

In one arrest in Erie, Pennsylvania, community members raised more than $2,500 to help with bail for a 29-year-old Black man who was arrested after they said white people had come from out of town and spray painted a parking lot.

In thousands of pages of court documents, the only apparent mention of antifa is in a Boston case in which authorities said a FBI Gang Task Force member was investigating “suspected ANTIFA activity associated with the protests” when a man fired at him and other officers. Authorities have not claimed that the man accused of firing the shots is a member of antifa.

Others have social media leftist ties; a Seattle man who expressed anarchist beliefs on social media is accused of sending a message through a Portland citizen communication portal threatening to blow up a police precinct.

More than 40% of those facing federal charges are white. At least 1/3 are Black, and about 6% Hispanic. More than two-thirds are under the age of 30 and most are men. More than a quarter have been charged with arson, which if convicted means a five-year minimum prison sentence.

Several of the defendants are not from the Democratic-led cities that Trump has likened to “war zones” but from the suburbs the Republican president has claimed to have “saved.” Of the 93 people arrested on federal criminal charges in Portland, 18 defendants are from out of state, the Justice Department said.

This has contributed to a blame game that has been a subplot throughout the protests. Leaders in Minneapolis and Detroit have decried people from out of state and suburbanites for coming into their cities and causing havoc. Trump in turn has blamed the cities for not doing their part.

“Don’t come down to Detroit and tear the city up and then go back home. That’s putting another knee on the neck of Black folk because we got to live here,” the Rev. Wendell Anthony of the NAACP said in May.

More than 40% of those facing federal charges are white. At least 1/3 are Black, and about 6% Hispanic. More than two-thirds are under the age of 30 and most are men. More than a quarter have been charged with arson, which if convicted means a five-year minimum prison sentence. More than a dozen are accused of civil disorder, and others are charged with burglary and failing to comply with a federal order. They were arrested in cities across the U.S., from Portland, Oregon, to Minneapolis, Boston and New York.

Attorneys for those facing federal charges either declined to comment or didn’t respond to messages from the AP.

Brian Bartels, a 20-year-old suburban Pittsburgh man who is described by prosecutors as a “self-identified left-wing anarchist,” was flanked by his parents when he turned himself in to authorities. Bartels, who lives at his parents’ house, spray painted an “A” on a police cruiser before jumping on top of it and smashing its windshield during a protest in the city, prosecutors said. He pleaded guilty in September.

One defendant who was arrested during a protest in the central Massachusetts city of Worcester told authorities he was “with the anarchist group.” Vincent Eovacious, 18, who is accused of possessing several Molotov cocktails, told authorities that he had been “waiting for an opportunity,” according to court documents.

But tucked into the protest-related cases are accusations of far-right extremism and racism as well.

John Malcolm Bareswill, angry that a local Black church held a prayer vigil for George Floyd, called the church and threatened to burn it to the ground, using racial slurs in a phone call overheard by children, prosecutors said. Bareswill, 63, of Virginia Beach, faces 10 years in prison after pleading guilty to making a telephonic threat.

Two Missouri militia members who authorities say traveled to Kenosha, Wisconsin, to see Trump’s visit in the wake of the police shooting of Jacob Blake were arrested at a hotel in September with a cache of guns, according to court documents. An attorney for one of the men, Michael Karmo, said he is “charged criminally for conduct that many Americans would consider patriotic,” as authorities have alleged his motive was to assist overwhelmed law enforcement.

Three of the men arrested are far-right extremists, members of the “Boogaloo” movement plotting to overthrow the government and had been stockpiling military-grade weapons and hunting around for the right public event to unleash violence for weeks before Floyd’s death, according to court documents.

After aborting a mission related to reopening businesses in Nevada as the coronavirus pandemic raged, they settled on a Floyd-related protest led by Black Lives Matter. Angry it had not turned violent, they brought carloads of explosives, military-grade weapons, to a meet-up about 2 miles (3.2 kilometers) from the protest site and pumped gasoline into tanks. FBI agents arrested them before they could act, according to a criminal complaint.

FBI Director Christopher Wray recently told a congressional panel that extremists driven by white supremacist or anti-government ideologies have been responsible for most deadly attacks in the U.S. over the past few years. He said that antifa is more of an ideology or a movement than an organization, though the FBI has terrorism investigations of “violent anarchist extremists, any number of whom self identify with the antifa movement.”

But the handling of the federal protest cases is vastly different from other recent times of unrest.

“Look at Travyon (Martin) verdicts, Eric Garner verdicts,” Kuby said, talking about high-profile cases in which Black people were killed but no charges were filed.

“There was a tremendous amount of anger and unrest and activity that was objectively unlawful,” he said. “There were objections about law enforcement being militarized, but you didn’t see following the quelling of those demonstrations any significant federal law enforcement involvement.”