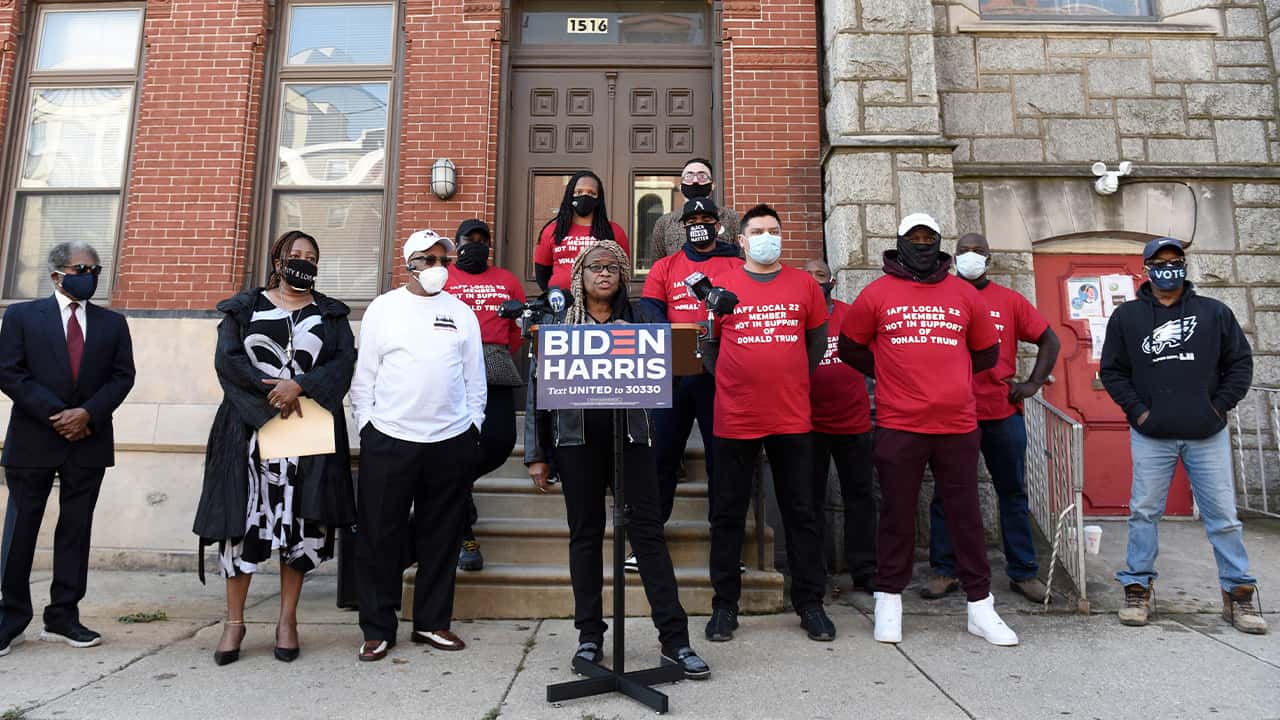 PHILADELPHIA — Police unions nationwide have largely supported President Donald Trump’s reelection, amid mass demonstrations over police brutality and accusations of systemic racism — but a number of Black law enforcement officers are speaking out against these endorsements, saying their concerns over entering the 2020 political fray were ignored.

Trump has touted his support from the law enforcement community, which includes endorsements from national, city and state officers’ unions — some of which publicly endorsed a political candidate for the first time. He’s running on what he calls a “law and order” platform and tapping into a strain of anger and frustration felt by law enforcement who believe they are being unfairly accused of racial discrimination.

There are more than 8,000 law enforcement agencies in the U.S., with large departments holding sway nationally. The number of minority officers in policing has more than doubled in the last three decades, but many departments still have a smaller percentage of Black and Hispanic officers compared to the percentage of the general population those communities make up.

Many fraternal Black police organizations were formed to advocate for equality within police departments but also to focus on how law enforcement affects the wider Black community. There have often been tensions between minority organizations and larger unions, like in August, when the National Association of Black Law Enforcement Officers issued a letter condemning use of deadly force, police misconduct and abuse in communities of color.

While support for the Republican incumbent does not strictly fall along racial lines, many Black officers say the endorsements for Trump don’t fairly represent all dues-paying members.

“We are members of these unions, and they don’t take into consideration our feelings about Donald J. Trump, then they don’t care about us and … they don’t care about our dues,” said Rochelle Bilal, the recent past president of the Guardian Civic League of Philadelphia, calling the National Fraternal Order of Police’s Trump endorsement an “outrage.”

Bilal, who was elected as Philadelphia’s first Black female sheriff last year, spoke at at an early October news conference with other Black law enforcement groups in Philadelphia to condemn Trump endorsements and the process they say ignored their concerns over what they perceived to be racist remarks, support for white supremacist groups and a lack of respect for women from Trump.

But national union leaders say the process is designed to give everyone a voice and the endorsement represents the majority of officers. The Fraternal Order of Police represents close to 350,000 officers nationally, but does not track racial demographics.

“I am a Black American and a Black law enforcement officer,” said Rob Pride, the National Fraternal Order of Police chair of trustees. “It’s been emotionally a rollercoaster ride for me since the George Floyd incident. It was horrific.”

Pride, who oversees the vote that leads to the organization’s presidential endorsement, says the May 25 police killing of Floyd in Minneapolis and the political climate “is tearing America apart” and having a similar effect on the FOP.

National FOP leaders said they have heard from members who don’t agree with the Trump endorsement — and they’re open to talking over concerns — but that all 44 state Fraternal Orders of Police chapters that cast a ballot voted for Trump. Pride said the whole process starts locally, with lodges passing out candidate survey answers and ballots and then voting at a statewide meeting. State delegates then voted at the national meeting.

“We could probably have an hourlong conversation about why some folks feel President Trump is racist and why others disagree,” he said. “But there are a lot of officers of all races of all backgrounds who feel he best represents and supports the interests of law enforcement.”

On the local level, police reform bills driven by protests against police brutality in the wake of Floyd’s killing have also stoked local unions’ endorsements of candidates for state offices at higher rates this year — some issuing endorsement for the first time in decades. While many union leaders say the endorsements aren’t based on political parties, they have largely been for Republicans challenging candidates who have voted for what unions call “anti-police” reform bills. Philadelphia firefighter John Elam talks to reporters during a press conference, Friday, Oct. 9, 2020, in Philadelphia. Public servants, firefighters, paramedics, emergency responders and a diverse group of law enforcement professionals denounce the Fraternal Order of Police and Local 22 for not listening to the concerns of the dues paying union members when endorsing President Donald J. Trump for re-election. (AP Photo/Michael Perez)

Philadelphia’s FOP Lodge 5 President John McNesby said in a statement that the group, which represents 6,500 members, did not make an endorsement in the presidential race, and deferred to its parent union’s endorsement. But members said that despite being the largest lodge in the state, they weren’t given a chance to vote or be counted by the state or national delegates.

Denouncing the endorsement processes, The Guardian Civic League has asked its about 1,200 members to be prepared to withdraw their dues from the national FOP, as has the Club Valiants of Philadelphia — an organization of more than 500 minority firefighters — from the Local 22 of the International Fire Fighters and Paramedics Union. In endorsing Trump, Local 22 broke from its parent organization, which endorsed Democrat Joe Biden.

Valiants leaders said the Local 22’s endorsement was based on survey responses from about 500 of the union’s nearly 5,000 members. Local union leaders said a redo survey is being sent to members in response to the backlash and its endorsement will be revised if necessary by the end of the month.

“The election is Nov. 3, and people are out there voting now. What is it going to do to rescind the endorsement days before the election?” said John Elam, a Philadelphia firefighter and Valiants member. “We want a fair process. We wanted a fair process from the beginning.”

In New York City, Patrick Lynch — the head of the Police Benevolent Association that represents about 24,000 officers — announced the union’s endorsement of Trump at August’s Republican National Convention, something members said they had no warning would happen. An unsigned letter from the Guardians Association said the Black and minority officers the group represents felt blindsided by Lynch’s endorsement and wished the union had stayed neutral.

Lynch said it was the union’s first presidential endorsement in at least 36 years.

“That’s how important this is,” Lynch said to the crowd during an event at Trump’s golf club in Bedminster, New Jersey, telling the president: “You’ve earned this.”

During September’s presidential debate, Trump ticked off the locations where he felt he had support from law enforcement. “I have Florida, I have Texas, I have Ohio,” he said. “Excuse me, Portland, the sheriff there just came out today and said, ‘I support President Trump.’”

Terrance Hopkins, president of the Black Police Association of Dallas, said a handful of officers left the Dallas Police Department’s largest union, partly driven by its support for Trump, and had joined his organization.

“A lot of these officers feel like they aren’t being considered. A lot of the issues that push them to that point border along racial lines,” Hopkins, a 30-year veteran officer, said. “And it’s not just here. I got a call from some Black officers in Kansas City, Missouri, who wanted to join my organization because they don’t have any other outlet and they don’t feel like they are being represented.”

The Hidden Factors That Could Produce a Surprise Trump Victory