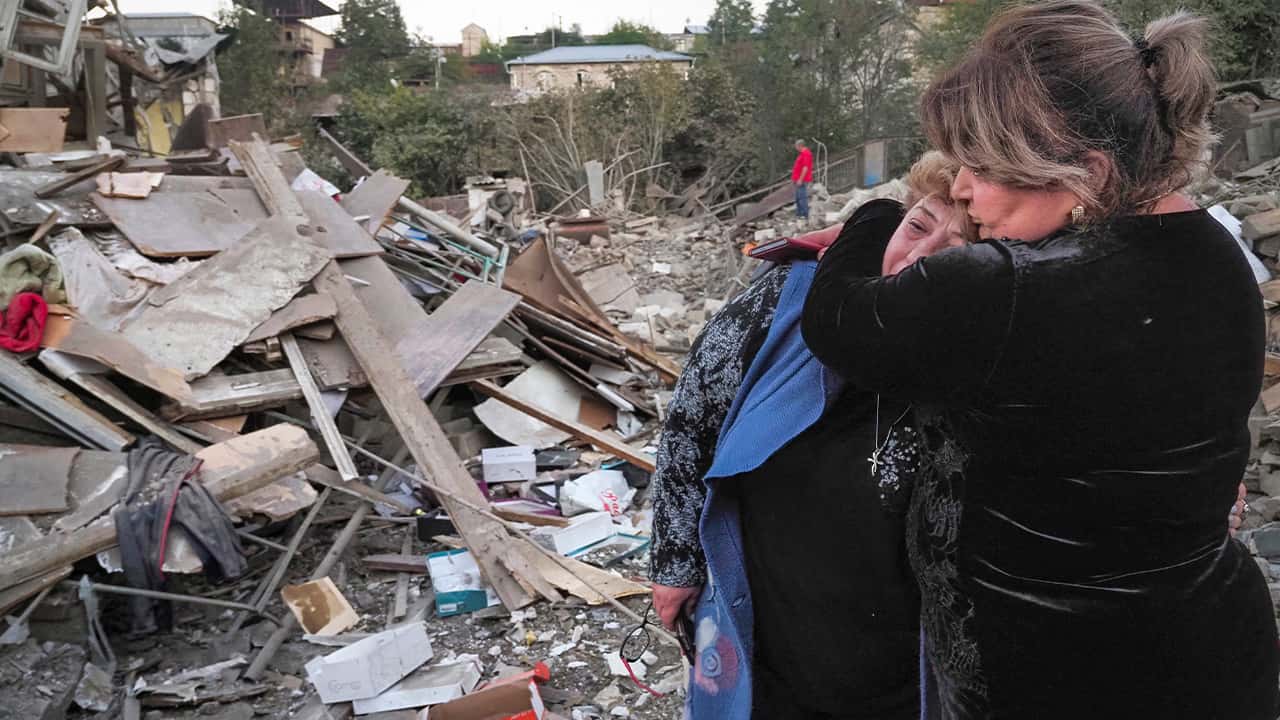 YEREVAN, Armenia — Despite a second attempt at a cease-fire, Armenia and Azerbaijan traded accusations Sunday of violating the new truce in their destructive conflict over the separatist region of Nagorno-Karabakh.

The latest truce, which was announced Saturday and took force at midnight, was the second attempt to establish a cease-fire since heavy fighting between Armenian and Azerbaijani forces broke out in Nagorno-Karabakh on Sept. 27. The fighting and shelling has killed hundreds of people — both combatants and civilians — and marks the biggest escalation of a decades-old conflict over the region in more than a quarter-century.

The fighting, involving heavy artillery, rockets and drones, has continued despite repeated calls for cessation of hostilities coming from around the globe. It also raises the specter of a wider conflict that could draw in Russia and Turkey and threaten Caspian Sea energy exports.

Armenian military officials on Sunday reported artillery shelling and missile strikes by Azerbaijani forces in the conflict zone overnight. In the morning, “the enemy launched an attack in the southern direction,” and there were “casualties and wounded on both sides,” Armenian Defense Ministry spokeswoman Shushan Stepanian said.

Azerbaijan’s Defense Ministry, in turn, maintained that Armenian forces used mortars and artillery in the conflict zone overnight despite the cease-fire and in the morning attempted attacks in several directions. The ministry accused Armenia of using large-caliber weapons to attack the positions of the Azerbaijani army in two regions north of Nagorno-Karabakh along the border, a claim Armenian military officials denied.

The Azerbaijani military also said it downed an Armenian Su-25 warplane “attempting to inflict airstrikes on the positions of the Azerbaijan army in the Jabrayil direction,” but Stepanian dismissed the statement as untrue.

According to Nagorno-Karabakh Officials, 673 of Their Servicemen Have Been Killed in the Renewed Fighting

U.N. Secretary-General Antonio Guterres condemned attacks from both sides on populated areas and expressed deep regret that the warring parties have “continuously ignored the repeated calls of the international community to immediately stop the fighting,” U.N. spokesman Stephane Dujarric said.

The U.N. chief underscored in his latest calls with the foreign ministers of Armenia and Azerbaijan that both sides have an obligation under international humanitarian law to protect civilians and civilian infrastructure, Dujarric said. Guterres also expects both parties to abide by the Oct. 18 humanitarian truce and resume negotiations without delay under the auspices of the Organization for Security and Cooperation in Europe.

Nagorno-Karabakh lies within Azerbaijan but has been under the control of ethnic Armenian forces backed by Armenia since a war there ended in 1994.

According to Nagorno-Karabakh officials, 673 of their servicemen have been killed in the renewed fighting. Azerbaijan hasn’t disclosed its military losses, but says 60 civilians have died so far and 270 have been wounded.

Turkey has publicly backed oil-rich Azerbaijan in the conflict and vowed to help it reclaim its territory.

Russia, which has a security pact with Armenia but has cultivated warm ties with Azerbaijan, hosted top diplomats from both countries last week for more than 10 hours of talks that ended with the initial cease-fire agreement. But the deal frayed immediately after the truce took effect last Saturday, with both sides blaming each other for breaching it.

The new cease-fire agreement was announced a week later on Saturday, following Russian Foreign Minister Sergey Lavrov’s calls with his counterparts from Armenia and Azerbaijan, in which he strongly urged them to abide by the Moscow deal.

But several hours after the truce took force at midnight, both sides started accusing each other of breaching the agreement.

Later Sunday, Armenia and Azerbaijan reiterated their commitments to the cease-fire in statements issued by their foreign ministries, and laid the blame for the breaches on each other.

Azerbaijan “reserves its right to take counter measures to protect its civilians and positions,” the country’s Foreign Ministry said.

Yerevan “will continue to undertake all necessary measures to impose peace on Azerbaijan and establish a cease-fire regime which will entail precise and effective mechanisms for maintaining and verifying it,” Armenian Foreign Ministry said.

In a separate statement, Armenia said the Azerbaijani government in Baku “categorically rejected” an attempt to reach an agreement on withdrawing wounded soldiers from the battlefield through mediation by the International Committee of the Red Cross.

Azerbaijani authorities said they were prepared to hand over the bodies of some Armenian servicemen to Armenia through mediation by the ICRC and an agreed-upon border corridor “in the direction of the Tovuz region.” Officials didn’t clarify how many bodies that entailed.