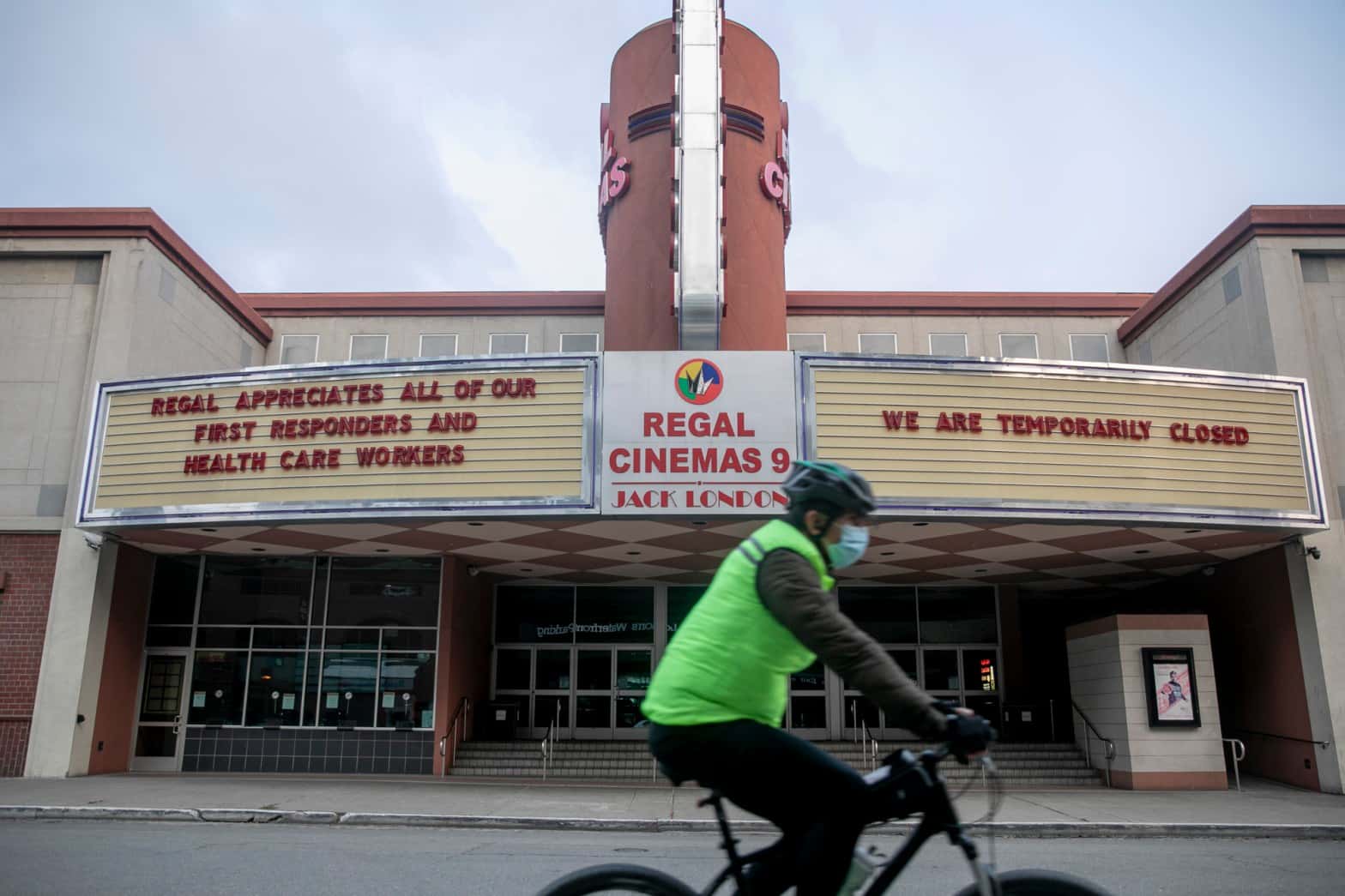 Greer, 48, is an accountant by training who was furloughed from her job as a restaurant server in the high desert town of Phelan just as the pandemic hit. It took three months to get her first unemployment check, and with no back-to-work date in sight, Greer and many of the other 2.1 million jobless Californians have been hoping for a reprieve with a second round of federal stimulus money.

It’s a hope that has dwindled as President Donald Trump last week instructed his party “to stop negotiating until after the election when, immediately after I win, we will pass a major Stimulus Bill.” Even after a reversal and call for more individual stimulus checks, small business loans and an airline bailout, a deal has yet to materialize ahead of several looming political deadlines.

“Right now, they’re playing with fire,” Greer said. “They’re making it so people are going to be homeless. By the time restaurants reopen, people aren’t going to have cars to get there.”

California workers and small businesses are trying to stop the financial bleeding before rent moratoriums and an emergency Pandemic Unemployment Assistance program for contract workers are set to expire this winter. The state’s public schools, courts, parks and civil servants are already feeling the fallout after $11 billion in budget cuts and delayed payments took effect this summer, which lawmakers in Sacramento had hoped to reverse by Oct. 15 with funds from a new federal stimulus deal.

The mounting financial uncertainty comes as California grapples with a record year for wildfires and surging inequality, testing how much the nation’s most populous state and the world’s fifth-largest economy can do to save itself. After a historically unproductive year in Sacramento marked by labor groups crusading for new wealth taxes and moderates failing to deliver a promised state stimulus package, it will be up to voters to decide economic issues like a commercial property tax hike (Prop. 15), rent control (Prop. 21) and gig worker pay (Prop. 22).

“We like to talk about ourselves as a nation-state,” said Micah Weinberg, director of progressive advocacy group California Forward. “The implication of that is we need to start acting more like a nation and less like a state.”

But unlike a nation that can go into debt, California can’t print money and is required to balance its $202 billion annual budget. This constraint is why relief from Washington is crucial. Without federal stimulus money, high-tax California will be staring down a projected $8.7 billion deficit next year and have to either raise taxes or cut services that overwhelmingly benefit the poor. Already, there has been friction between Newsom and state finance officials over how to spend the $9.5 billion allocated to California by the federal CARES Act this spring.

Assemblymember Phil Ting said the state is still evaluating a new tax voucher system to generate revenue and reduce future cuts, with a report from the Department of Finance due in March. In the meantime, Weinberg said it’s also possible to make cheap-but-controversial regulatory changes to expedite economic recovery, like easing housing permitting requirements or immediately spending existing infrastructure funds.

“What an equitable recovery would require would be a very minimal investment from the perspective of the state budget,” Weinberg said. “You can’t do anything without a plan to do it, and right now we don’t have plans.”

It’s anyone’s guess whether Congress will pass its proposed $2 trillion stimulus deal in time for the Oct. 15 state deadline to reverse budget cuts, but Ting said lawmakers could react quickly if a deal happens later. Gov. Gavin Newsom could call a special session, he said, or the Legislature could move to reverse cuts when they return to the Capitol in December or January.

“If something doesn’t happen by Thursday, that does not mean there is another round of new state budget cuts,” Palmer said, though he advised those watching the ups and downs in Washington to find “a good supply of dramamine, because motion sickness will probably be involved.”

If no more federal aid money is allocated to California this year, the state’s K-12 schools will have to absorb $5.8 billion in payment deferrals, state employees would lose $2.8 billion in compensation, and public universities would have to process their own nine-figure budget reductions, among other cuts lawmakers hoped to reverse.

Another possibility is that the state cuts will proceed, but individual California residents like Greer will get relief from another round of stimulus checks, similar to the $1,200 sent this spring to Americans earning under $75,000 annually. “Please god,” Greer said, ticking off car insurance, utilities and other bills piling up. “I don’t care how they pass it.”

This year’s budget cuts could also be just the beginning. In May, the California Department of Finance projected a $32 billion drop in state revenue for the next year, though tax receipts have so far been higher than expected. The state has already borrowed upwards of $10 billion from the federal government to help pay unemployment claims, and there may be pressure in the coming months to extend benefits for longer than the maximum of 59 weeks currently available during the pandemic.

As it stands, public schools will have to cope with this year’s budget deferrals while trying to pull off distance learning — a balancing act that “burden(s) districts with less property wealth that rely more on state funding,” according to a recent Public Policy Institute of California report. During the last recession, said report co-author Julien Lafortune, schools were forced into more layoffs and deeper spending cuts in the years after the initial shock of the financial crisis. He worries that history could repeat itself.

“How bad will the situation be next year?” said Lafortune, an education-focused research fellow. ”When you look at the budget projections for next year, it’s a giant hole.”

Ting said lawmakers have so far prioritized “the most vulnerable Californians,” and will keep looking to avoid cuts to safety net programs like CalWorks, MediCal and CalFresh, since the state’s poorest residents have the least ability to draw on credit cards or other loans. “In essence,” he said, “we’re borrowing for millions of Californians, so they can keep food on the table and stay in their houses.”

When the first round of stimulus money went out earlier this year, California was the nation’s biggest beneficiary — on paper, at least. Thanks in part to federally backed programs like enhanced $600-a-week unemployment benefits and small business loans through the Paycheck Protection Program, Leila Bengali and her fellow economists at UCLA’s Anderson Forecast this fall projected a “better than expected” recovery from the pandemic over the next two years.

But that was assuming that the federal government passed another stimulus package worth at least $1 trillion. And adjusting for how big the state’s population is, federal money to California to date — including 60,000 small business loans worth some $68 billion — actually made less of an impact relative to the state’s massive workforce of more than 18 million people. “Those numbers are big,” Bengali said. “California was the highest of any of the states. But you have to keep in mind that California has the most workers, so the most payroll.”

The goal with stimulus money, she said, is to “prevent a downward spiral” with rent, utilities, and food that can destabilize households. Unemployed Californians have still struggled since the CARES Act’s initial $600 weekly boost expired. “It makes it harder and harder for them to find a job once the labor market sort of recovers,” Bengali said.

Horace Turner knows the feeling of staring down a financial cliff. The owner of Patterson’s Dynamic Building Blocks daycare has stayed open during the pandemic to watch the children of nurses, Amazon factory workers and farm workers. He quickly ran through a $36,000 small business loan when a few families left, and more recently had to buy new desks and school supplies for kids coming in to do virtual school lessons.

Even if there is another round of stimulus funding, he’s not sure if participating will help or dig him a deeper hole. “I can go back and ask for more,” Turner said, “but I just don’t know right now.”

Lauren covers the California economy for CalMatters. Her past stories have been published by the New York Times, the L.A. Times, the Guardian and others. She previously worked as a staff reporter for Protocol and the Silicon Valley Business Journal.