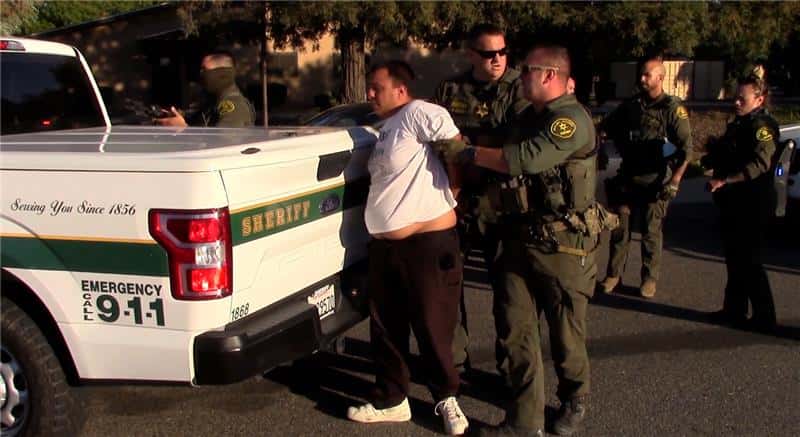 Christopher Contreras of Fresno is under arrest – again.

The Fresno County Sheriff’s Office says the 26 year-old suspect faces charges of rape, child molestation, arranging to meet with a minor to engage in sex and committing a felony while out on bail. Detectives also believe there are other victims they do not yet know about.

Contreras was one of 34 men arrested during the undercover operation “COVID Chat Down,” which was conducted by the Internet Crimes Against Children Task Force from July 20 to August 2, 2020. Contreras spent less than a day in jail and was released on August 1 after posting bond totaling $1,000.

According to the Sheriff’s department, detectives were made aware of a 15 year-old girl who was possibly the victim of sexual abuse. Their investigation led them to suspect Contreras, officials said.

A search warrant was issued on Oct. 13 for Contreras’ home, where he was arrested. Authorities say they also seized electronic devices at that time.

(Note: This video, provided by the Fresno County Sheriff’s Office, includes portions with no audio. Other audio has been obscured due to offensive language.)

Operation COVID Chat Down was a multi-agency effort developed as a result of the COVID-19 pandemic, where internet usage increased across the country with people of all ages. Officials say children in particular have engaged more with people through social media sites due to school closures and a reduction in extra-curricular activities.

A danger of being online more often, authorities say, is a potential encounter with a sexual predators seeking out children. Detectives with the Internet Crimes Against Children Task Force and special agents with Homeland Security developed an operation to identify, contact and arrest individuals suspected of targeting children for sex.

When a suspect requested to meet with the child, detectives arrived at a predetermined location and arrested them. Authorities say no children were involved in the operation. Detectives believe Contreras may have victimized other children.

Tipsters can remain anonymous and may be eligible for a cash reward.

Council Poised to Approve Alcohol Rules Without Discussion. Will ‘Bad Actors’ Be Protected?