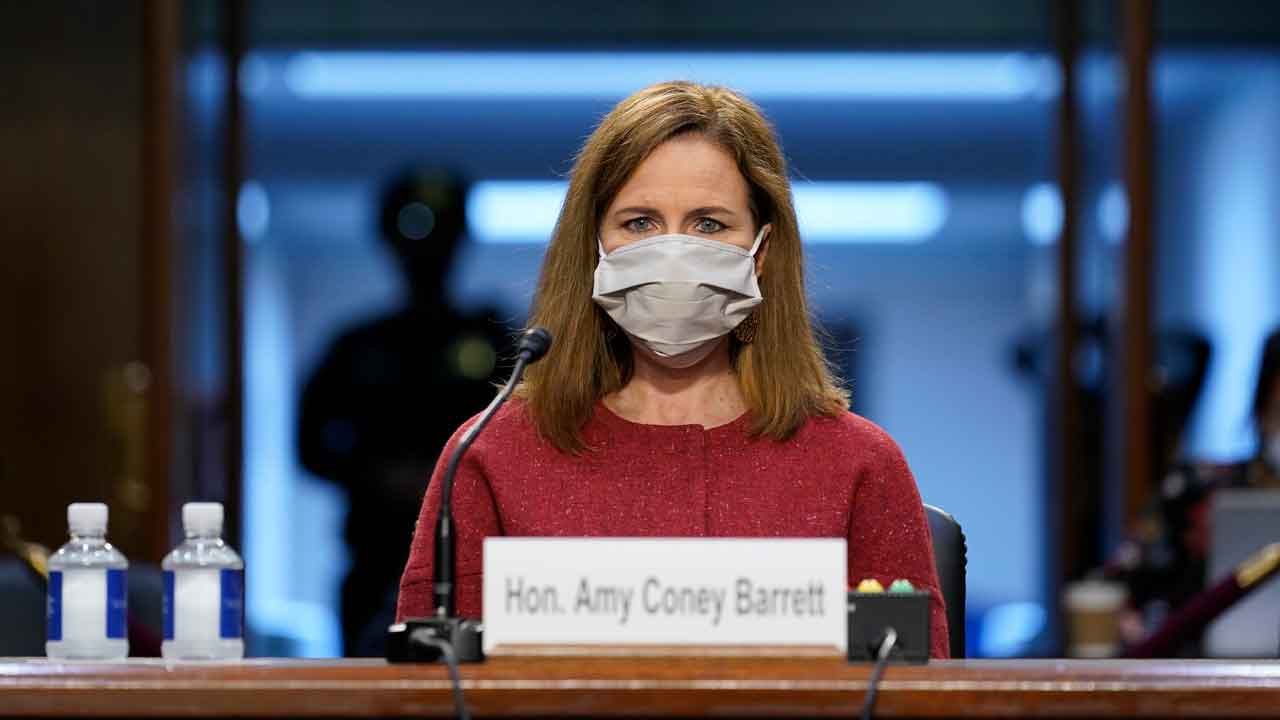 WASHINGTON — Supreme Court nominee Amy Coney Barrett said Tuesday she cannot commit to recusing herself from any cases involving disputes that may arise from the Nov. 3 presidential election.

Barrett told the Senate Judiciary Committee: “I can’t offer an opinion on recusal without short-circuiting that entire process.”

The judge said she had not spoken to President Donald Trump or anyone else in the administration about how she would handle any election related challenges. And she said she would have to confer with the other justices on the court before deciding.

Barrett, family in tow, is on Capitol Hill for a second day of hearings. The mood is likely to shift to a more confrontational tone as Barrett, an appellate court judge with very little trial court experience, is grilled in 30-minute segments by Democrats strongly opposed to President Donald Trump’s nominee, yet virtually powerless to stop her. Republicans are rushing her to confirmation before Election Day.

The committee chairman, Lindsey Graham, R-S.C., gaveled open the session under coronavirus protocols with a focus on health care, and ending the Affordable Care Act.

Graham also quickly asked if the Catholic judge would be able to shelve her personal beliefs to adhere to law.

Graham praised her as a conservative woman of faith and the best possible nominee Trump could have chosen.

“I will do everything I can to make sure that you have a seat at the table. And that table is the Supreme Court,” Graham said.

The Senate, led by Trump’s Republican allies, is pushing Barrett’s nomination to a quick vote before Nov. 3, and ahead of the the latest challenge to the “Obamacare” Affordable Care Act, which the Supreme Court is to hear a week after the election.

Republicans also hope to seat Barrett quickly enough to hear any legal challenges after the election. Democrats are demanding that she pledge not to take part in any election case, but she has made no such commitment.

One of the two Republicans on the panel who tested positive for COVID-19, Sen. Thom Tillis, joined the committee for the first time Tuesday, after ending quarantine.

Barrett presented her approach to the law as conservative and fair on Monday at the start of fast-tracked confirmation hearings. Democrats cast her as a threat to Americans’ health care coverage during the coronavirus pandemic.

With her husband and six of their seven children behind her in a hearing room off-limits to the public and altered for COVID-19 risks, Barrett delivered views at odds with the late Ruth Bader Ginsburg, the liberal icon whose seat Trump nominated her to fill, laying out a judicial philosophy she has likened to that of her conservative mentor, the late Justice Antonin Scalia.

“Courts are not designed to solve every problem or right every wrong in our public life,” declared the 48-year-old federal appeals court judge, removing the protective mask she wore most of the day to read from a prepared statement.

Americans “deserve an independent Supreme Court that interprets our Constitution and laws as they are written,” Barrett told the committee.

Ginsburg’s legacy was felt throughout Monday’s session, with some Democrats wearing lapel pins with her likeness. Barrett also praised the liberal icon, saying she was “forever grateful” for Ginsburg’s trailblazing path as a woman on the court.

Testifying from her office because of the pandemic, Harris said that the court is “often the last refuge for equal justice” and that not only health care but voting rights, workers’ rights, abortion rights and the very idea of justice are at stake.

Barring a dramatic development, Republicans appear to have the votes to confirm Barrett to a lifetime seat on the Supreme Court, and they spent their time portraying her as a thoughtful judge with impeccable credentials. She would be Trump’s third justice.

Underscoring the Republicans’ confidence, Graham set an initial committee vote on the nomination for Thursday, even before the last day of hearings wrapped, which would allow final approval by the panel for one week later and a vote for confirmation by the full Senate on Oct. 26.

Protesters rallied outside the Senate buildings with the hearing room largely closed to the public.

Democrats already were enraged that Republicans are moving so quickly, having refused to consider President Barack Obama’s nominee after Scalia’s death in February 2016, well before that year’s election.