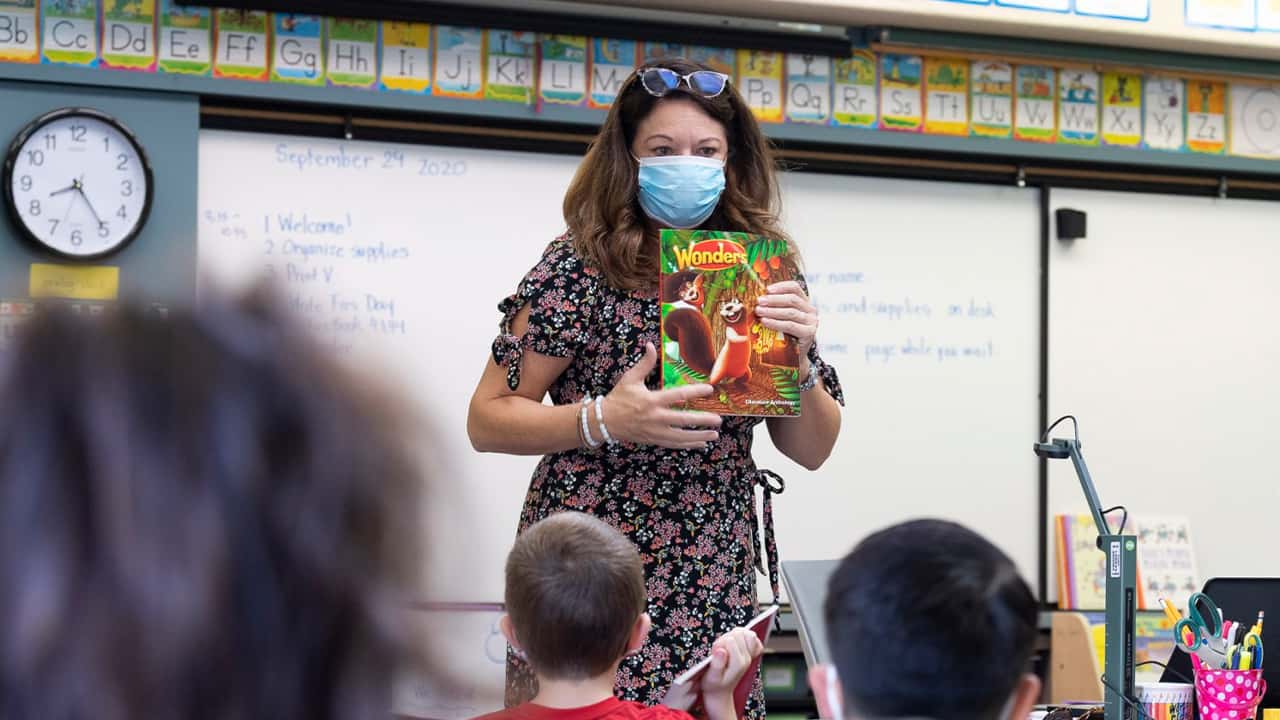 The night before the first day of in-person instruction for elementary students in San Diego County’s Poway Unified School District, principals sent families detailed instructions on how to drop off their children.

The following Thursday morning, “welcome back” balloons adorned campuses’ front gates and school employees took students’ temperatures as they waited inside their parents’ cars. Principals from other schools in the district watched the process unfold, looking for processes they could implement at their own soon-to-reopen schools.

So began for Poway the hybrid learning experiment playing out across the country.

In Poway, one of the largest California school districts to attempt reopening campuses, elementary students learning in person will attend their school in cohorts for part of each weekday — either morning or afternoon — and learn asynchronously, or on their own, the rest of the school day. Families also have the choice to keep their students in full-time remote learning programs.

All of Poway’s 26 elementary schools will be open for a hybrid learning option Oct. 12. While the smaller continuation high school will launch its hybrid program this week — kids will alternate days on campus — still to be determined is how the district of more than 36,000 students will bring back its middle- and high-school students on campuses.

As more California schools gain permission from the state to offer in-person instruction, they are grappling with a massive logistical puzzle: How, exactly, do you operate schools within schools, where some students attend classes in person in some form while others learn remotely full-time?

Giving families the option to choose between a hybrid, or blended, model — meaning students split their time learning on campus and at home — and full-time remote learning appears to be the course that many of the state’s school districts are charting toward.

Some of that is born out of necessity. The state signaled this summer that schools would likely have to implement some form of hybrid scheduling in order to reduce class sizes and implement the social distancing and safety measures that help mitigate the spread of the coronavirus.

The plans to give families a choice also reflect the fact that, in any given community across the state, there are widely diverging thoughts from families and educators on when, how and if schools should physically reopen.

“We have parents on one end of the spectrum begging us to reopen the schools, and we have parents clearly on the other side saying it is absolutely foolish to open the schools. And then there’s a whole bunch of people in between,” said Jim Hanlon, an assistant superintendent in Chico Unified.

The largest school district in Butte County has tentatively circled Oct. 19 as its transition date toward a hybrid learning option. Hanlon said while it’s not possible to satisfy everyone in the community, the district plans to “offer options where everyone along that spectrum can have a choice that they’re at least OK with.”

Adding to the complexity, the preferences from teachers and parents do not neatly align in some Poway campuses, Phelps said, noting that at one campus, 80% of staff want to return in person, compared with 40% of families at that school.

Meanwhile, secondary schools present an altogether different challenge in a district the size of Poway’s because older students have multiple teachers, likely requiring a different approach from elementary schools. One possibility could be “simultaneous learning,” Phelps said, in which teachers instruct a cohort of students in person while another group of pupils tune into lessons online at home.

Hybrid models vary widely across the state, with some school systems offering to bring students back one day a week, others planning on doing so on alternating days and still other schools planning on five days a week under a shortened schedule.

Western Placer Unified, a district of 9,700 students, settled on the latter option as it began its hybrid program Tuesday, in part because most parents in the community told the district a 5-day schedule gave their families the most stability, according to district superintendent Scott Leaman. With roughly 30% of students enrolled in full-time remote learning, teachers in Western Placer will have groups of students both learning in-person and remotely, he said.

Teachers will have the flexibility to determine how they will handle the two cohorts, with some potentially teaching their in-person cohort in the mornings and remote group in the afternoon, or simultaneously.

“When you look from district to district, everyone’s making decisions based on their student population and how they need to service their students,” Leaman said.

As schools attempt to move toward hybrid schedules, the thorniest issues are ones that schools did not have to contemplate in normal times. Mid-year recalibrations to school schedules could make it difficult for some students to remain with the same teacher or even in the same school, as some districts mull whether to dedicate separate virtual schools to educate students in remote learning.

Several school districts are hiring more personnel to handle the demanding workloads of teachers in hybrid classrooms. Chico, for instance, hired 12 extra teachers to help operate its online academy, where enrollment this year shot up, and has reclassified some of its classified employees to help clean and sanitize classrooms as cohorts of elementary students switch out during the school day.

Poway, among the largest 25 districts in the state, added custodial staff and 28 teachers for its elementary schools, alone. Teachers there have the option to teach in person or remotely, said Phelps, the superintendent, with in-person elementary teachers leading two cohorts of students each weekday in the morning and afternoon.

As of Tuesday, 43 counties have moved out of the state’s most restrictive tier in the four color-coded list governing business and school reopenings. That means that, theoretically, schools representing 59% of the state’s 6.1 million K-12 students will be allowed by the state to offer in-person instruction by the end of the October if their counties remain outside of the purple tier, the most restrictive tier signaling “widespread” transmission of the virus.

But for the first time since the state introduced its tiered list in late August, some counties have fallen back into more restrictive tiers, highlighting the fluidity of local public-health pictures. With flu season underway and coronavirus cases across the state plateauing, it’s not clear whether infections across California will stay low enough for sustained runs at in-person learning before the end of the calendar year.

The state’s top health official said Tuesday that school reopenings have not factored toward rising cases in California.

Currently, a large majority of California school districts are doing full-time remote learning. Several large, urban districts have begun to set target dates for in-person instruction, though timelines are uncertain for some of the state’s largest district. Some small and rural schools are already doing hybrid learning.

Several school systems that have green lights for reopening are holding off on immediate reopenings as they wrestle with how to test employees and students for the virus and trace cases. State and federal governments have largely taken a hands-off approach on these pressing issues, adding to local tensions.

In Poway, bringing students back on campuses was a decision that was “in the best educational and social wellness for our children,” Phelps said.

Still, limited staffing and classroom space could cap the extent to which students might be able to return on campus. Education leaders and advocates have urged the federal government to help reopen schools with added safety measures, such as testing, though latest discussions have stalled.

“We don’t have (the) kind of money to pay for hiring a whole new staff essentially to run a whole new school for every one school, two schools within a school,” Phelps said.

Ricardo Cano covers California education for CalMatters. Cano joined CalMatters in September 2018 from The Arizona Republic and azcentral.com, where he spent three years as the education reporter. Cano has been a finalist for three awards, a Livingston Award for Young Journalists honoring outstanding achievement by professionals under the age of 35, an Education Writers Association award for data journalism and two consecutive Arizona Press Club awards for public service journalism.