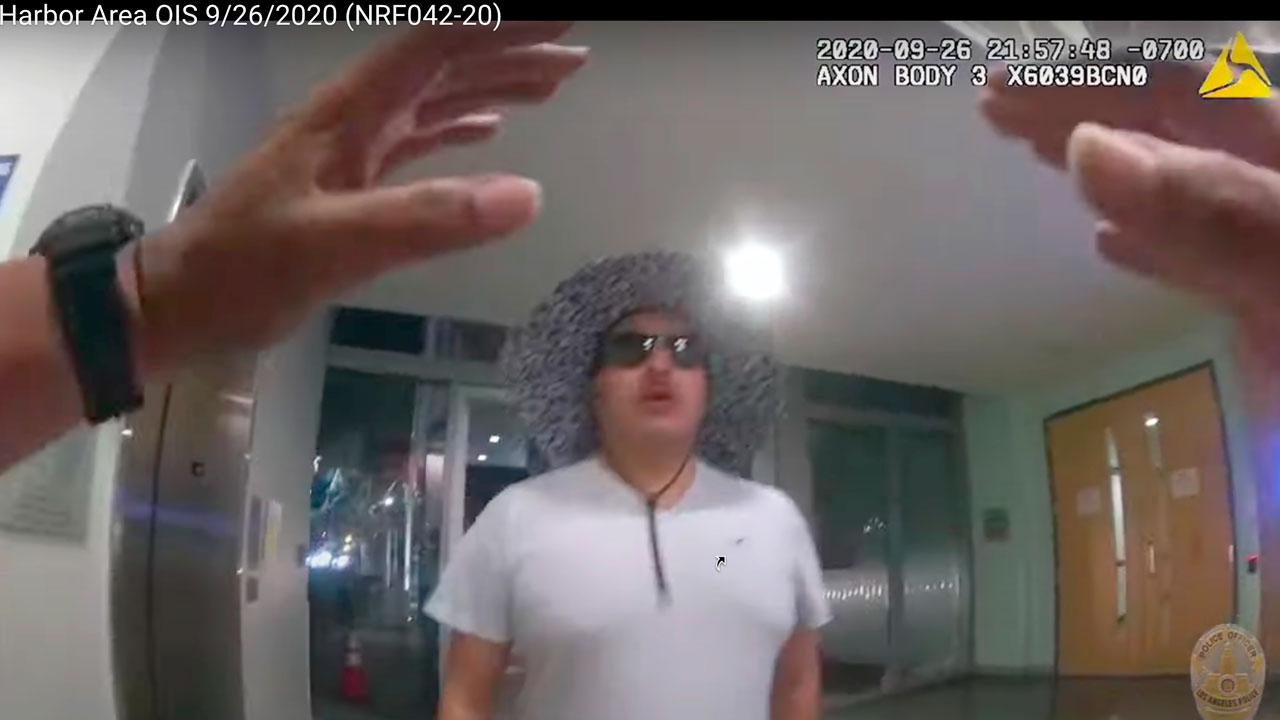 Shocking video released Wednesday captured a brutal attack on an Los Angeles police officer last month, including footage from the officer’s own body-worn camera that shows a violent struggle for his gun.

The 21-minute video compilation of the Sept. 26 assault includes footage from a surveillance camera at the San Pedro police station and the body camera of Officer Anthony Freeman, as well as from the body cameras of officers who arrested suspect Jose Cerpa Guzman.

Freeman, a veteran of the department for more than 30 years, survived the attack. He had not yet returned to work as of Wednesday, the LAPD said.

At one point, the graphic footage shows his blood dripping onto the lobby floor as Freeman shouts for an ambulance, breathing heavily and saying, “I’m starting to black out!”

Guzman, 29, was arrested after a brief vehicle pursuit — parts of the chase and the takedown were captured on camera — and authorities say they found Freeman’s gun in his truck.

Guzman is being held on $2.2 million bail, records show. He is scheduled to be arraigned Oct. 16 on charges of attempted murder on a peace officer and assault with a semiautomatic firearm, as well as robbery, evading and resisting an officer. It was not immediately clear if he had an attorney who could speak on his behalf.

“This was a brutal, unprovoked attack on one of our officers where the suspect clearly tried to kill a cop,” said Craig Lally, president of the union that represents rank-and-file officers, the Los Angeles Police Protective League, in a statement. “Thanks to the efficient and professional work of our officers, this menace is off of our streets and we hope he stays there. There should be no leniency for an attempted cop killer.”

The incident came two weeks after two Los Angeles County Sheriff’s Department deputies were ambushed as they sat in their police vehicle in Compton, about 15 miles (24 kilometers) north of San Pedro. The officers suffered serious gunshot wounds but both have been released from a hospital. A 36-year-old man is charged in that attack.

Parts of the LAPD videos do not have sound, as the body-worn cameras had not yet been activated by the officers. When turned on, the cameras are able to save the video — but not the audio — from the two minutes prior to activation.

Grabbed Officer’s Gun and Pistol-Whipped Him

The video depicts Guzman punching Freeman and knocking him to the ground in a seemingly unprovoked attack. As Guzman grabs Freeman’s gun, the footage shows the officer’s hands around the suspect’s neck and then trying to pull the gun away. Guzman pistol-whipped him with the weapon before pointing it at Freeman’s chest.

Guzman ran out of the station as the watch commander, Sgt. Robin Aguirre, came into the lobby.

Freeman shouted to her “he got my gun!” and she followed Guzman outside, where they exchanged gunfire. Guzman sped away, prompting a pursuit from other officers nearby. They wrestle him into handcuffs as he wails and upbeat music nearby is heard in the background.