Pence-Harris Debate to Unfold as Trump Recovers From Virus 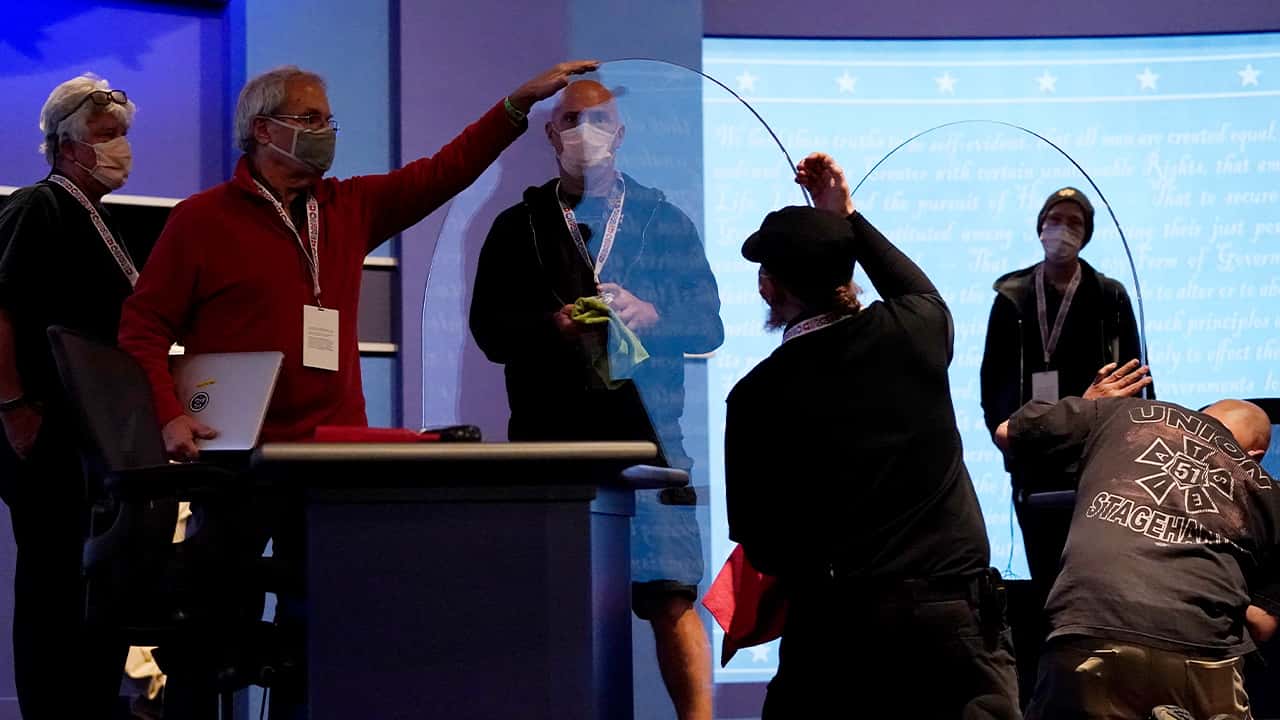 SALT LAKE CITY — Vice President Mike Pence and his Democratic challenger, California Sen. Kamala Harris, are set to face off in a debate that will offer starkly different visions for a country confronting escalating crises.

The debate Wednesday night in Salt Lake City is the most highly anticipated vice presidential debate in recent memory. It will unfold while President Donald Trump recovers at the White House from the coronavirus after spending several days in the hospital, a serious setback for his campaign that adds pressure on Pence to defend the administration’s handling of the pandemic.

Ultimately, the debate is a chance for voters to decide whether Pence and Harris are ready to step into the presidency at a moment’s notice. It’s hardly a theoretical question: The 74-year-old Trump is fighting the virus and Biden, at 77, would become the oldest person elected president.

For Harris, the debate is her highest profile opportunity to say how Democratic presidential nominee Joe Biden would stabilize the United States, especially when it comes to the pandemic and racial justice. She will have the chance to explain her views on law enforcement, an area in which she’s viewed warily by some progressives, given her past as a prosecutor.

Ultimately, the debate is a chance for voters to decide whether Pence and Harris are ready to step into the presidency at a moment’s notice. It’s hardly a theoretical question: The 74-year-old Trump is fighting the virus and Biden, at 77, would become the oldest person elected president.

Pence aims to highlight the administration’s economic record and attempt to portray the Democratic ticket as beholden to the “radical left,” said former GOP Gov. Scott Walker of Wisconsin, who is helping the vice president prepare for the debate, on “Fox & Friends.”

While the debate will likely cover a range of topics, the virus will be at the forefront.

Pence and Harris will appear on stage exactly 12.25 feet (3.7 meters) apart and separated by plexiglass barriers. Anyone in the small audience who refuses to wear a mask will be asked to leave. Both candidates last tested negative for the coronavirus on Tuesday, their teams said.

Pence last week was with Trump and others who have since tested positive, and the vice president has faced questions about whether he should be at the debate at all. He has repeatedly tested negative for the virus, and his staff and doctors insist he does not need to quarantine under Centers for Disease Control and Prevention guidelines.

The CDC defines risky “close contact” as being within 6 feet (1.8 meters) of an infected person for at least 15 minutes starting from two days before the onset of symptoms or a positive test.

Pence’s team objected to Harris’ request for plexiglass barriers, arguing it was medically unnecessary. But the Commission on Presidential Debates had already agreed to the barriers. Pence’s chief of staff, Marc Short, said the vice president would be there because it’s “too important for the American people.”

Sabrina Singh, a spokesperson for Harris, said the senator “will be at the debate, respecting the protections that the Cleveland Clinic has put in place to promote safety for all concerned.” The Cleveland Clinic serves as a health adviser to the commission.

The debate is unlikely to be a repeat of the chaotic debate between Trump and Biden last week.

Pence is eager to focus on what he and Trump see as the Democrats’ too-liberal policies, but it may be difficult to shift the conversation away from the Republican administration’s uneven handling of the pandemic. Pence serves as chair of the president’s coronavirus task force, which has failed to implement a comprehensive national strategy even as Trump himself recovers from the disease and the national death toll surges past 210,000 with no end in sight.

Biden has raised questions about whether he will participate in next week’s scheduled debate with Trump, telling reporters on Tuesday: “I think if he still has COVID, then we shouldn’t have a debate.”

The vice president is a 61-year-old former Indiana governor and ex-radio host, an evangelical Christian known for his folksy charm and unwavering loyalty to Trump.

Harris is a 55-year-old California senator, the daughter of a Jamaican father and an Indian mother. She is also a former prosecutor whose pointed questioning of Trump’s appointees and court nominees helped make her a Democratic star.

She will make history as the first Black woman to appear in a vice presidential debate. Democrats hope the historic nature of her candidacy will help energize key groups of likely Democratic voters — African Americans and young people, in particular — who have shown less excitement for Biden.

She will make history as the first Black woman to appear in a vice presidential debate. Democrats hope the historic nature of her candidacy will help energize key groups of likely Democratic voters — African Americans and young people, in particular — who have shown less excitement for Biden.

It’s unclear how aggressive the candidates will be with each other.

Both have adopted a cautious approach on the trail in line with past running mates who, above all, are tasked with not hurting their party’s ticket.

Some Harris allies fear that a conservative approach will prevent her from shining.

“Overly scripting Kamala Harris is tantamount to removing five bullets out of her gun before you walk into a gun fight,” said Nathan Barankin, who served as Harris’ chief of staff in the Senate and when she was California attorney general.

While some Democrats have set high expectations for the debate, Harris and her allies have been trying to keep them low. Last month, when California’s state Senate president told Harris on a Zoom call that home state fans were excited to watch her debate, shes quickly interjected.

“He’s a good debater,” she said of Pence, laughing. “I’m just, I’m so concerned, like I can only disappoint.”

Gender could also play a role in the debate, Hillary Clinton, the first woman to lead a presidential ticket, said during a recent fundraiser.

She suggested Pence would try to paint Harris as “the inexperienced woman candidate.” Harris will have to be mindful of a double standard for women in politics as she responds, Clinton said.

“She’s got to be firm and effective in rebutting any implication that comes from the other side, but to do it in a way that doesn’t, you know, scare or alienate voters,” Clinton said.

Harris has been preparing for the debate in Salt Lake City since Saturday. Karen Dunn, a Washington lawyer who helped prepare Clinton for her 2016 debates against Trump, is leading Harris’ debate preparations.

Harris plans to focus on what she and Biden see as failures of leadership by the Trump-Pence administration but avoid personal attacks against Trump, as Biden has done since the president was hospitalized for the virus, according to a campaign aide who wasn’t authorized to discuss debate planning publicly and spoke on condition of anonymity.

Aides note that Pence’s criticism has focused almost exclusively on Biden and his record instead of Harris. It’s likely to stay that way Wednesday.

California Sees No Link From School Openings to Virus Spread