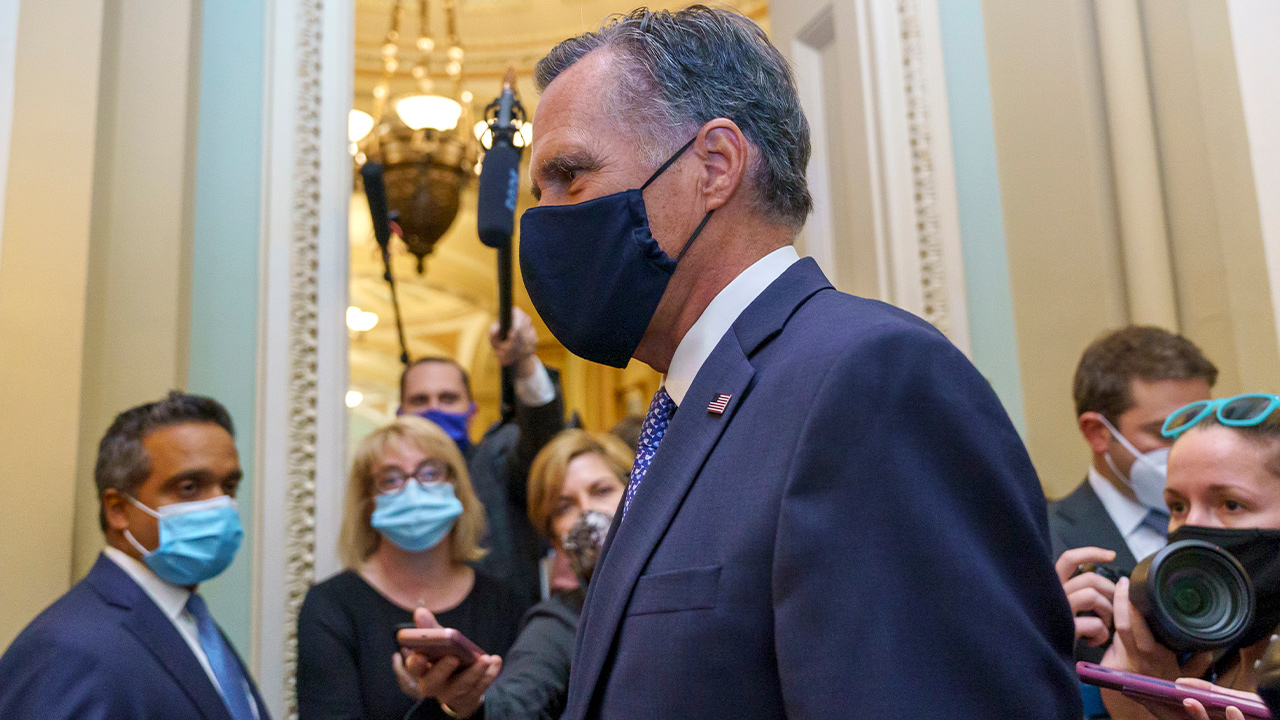 WASHINGTON — Republican Sen. Mitt Romney of Utah said Tuesday he supports voting to fill the late Justice Ruth Bader Ginsburg’s seat on the Supreme Court, all but ensuring President Donald Trump has the backing to push his choice to confirmation over Democratic objections that it’s too close to the November election.

Romney told reporters that it is not “written in the stars” that the court will have a liberal bent and that with Trump’s nominee — still to be announced — it will become more conservative.

Republicans hold a 53-47 majority in the Senate, and the Democrats would need four GOP defections to block consideration. Two Republicans have said they oppose taking up a nomination at this time, but no others are in sight.

Trump is planning to announce his choice to replace the late Ginsburg on Saturday, setting off one of the quickest confirmation processes in modern times, with early voting for the presidential election is already underway in several states.

“If the nominee reaches the Senate floor, I intend to vote based upon their qualifications,” Romney said. Even if he and the other two should eventually vote against Trump’s nominee, Vice President Mike Pence could break a 50-50 tie in Trump’s favor.

Trump is planning to announce his choice to replace the late Ginsburg on Saturday, setting off one of the quickest confirmation processes in modern times, with early voting for the presidential election is already underway in several states.

Senate Majority Leader Mitch McConnell declined to provide scheduling information as he opened the chamber Tuesday, but he is set to meet privately with GOP senators at their campaign headquarters to assess next steps.

Conservative senators are pushing for a swift vote before Nov. 3. The Senate Judiciary chairman who will shepherd the nomination through the chamber said Republicans have the support they need for confirmation.

“The nominee is going to be supported by every Republican in the Judiciary Committee,” Chairman Lindsey Graham told Fox News late Monday. “We’ve got the votes to confirm the justice on the floor of the Senate before the election and that’s what’s coming.”

The president met with conservative Judge Amy Coney Barrett at the White House on Monday and told reporters he would interview other candidates and might meet with Judge Barbara Lagoa when he travels to Florida later this week. Conversations in the White House and Senate Majority Leader Mitch McConnell’s office have been increasingly focused on Barrett and Lagoa, according to a person granted anonymity to discuss the private deliberations.

Republicans hold a 53-47 majority in the chamber and can confirm a justice by a simple majority.

Romney would not say whether he supports Barrett or any particular candidate. But he acknowledged the court will shift to become more conservative.

Barrett Has Long Been Favored by Conservatives

“I recognize that we, we may have a court which has more of a conservative bent than it’s had over the last few decades,” Romney told reporters on Capitol Hill. “But my liberal friends have over many decades gotten very used to the idea of having a liberal court. And that’s not written in the stars.”

Democrats point to hypocrisy in Republicans trying to rush through a pick so close to the election after McConnell led the GOP in refusing to vote on a nominee of President Barack Obama in February 2016, long before that year’s election.

Romney dismissed that argument, saying “it was not unfair” of Republicans to refuse to consider Obama’s choice of Merrick Garland.

Barrett has long been favored by conservatives, and those familiar with the process said interest inside the White House seemed to be waning for Lagoa amid concerns by some that she did not have a proven record as a conservative jurist. Lagoa has been pushed by some aides who tout her political advantages of being Hispanic and hailing from the key political battleground state of Florida.

Barrett, 48, a judge on the U.S. Court of Appeals for the 7th Circuit, was a strong contender for the seat that eventually went to Brett Kavanaugh in 2018. At the time, Trump told confidants he was “saving” Barrett for Ginsburg’s seat.

Before joining the 7th Circuit, she had made her mark in law primarily as an academic at the University of Notre Dame, where she received a law degree and later began teaching at age 30. She clerked at the Supreme Court for conservative Justice Antonin Scalia, worked at the Miller, Cassidy, Larroca & Lewin law firm in Washington, D.C., then returned to Notre Dame.

Barrett has long expressed sympathy with a mode of interpreting the Constitution called originalism, in which justices try to decipher original meanings of texts in deciding cases. Many liberals say that approach doesn’t allow the Constitution to change with the times.

Trump has said he would choose a woman, and he admitted that politics may play a role. He gave a nod to another election battleground state, Michigan, and White House officials confirmed he was referring to Joan Larsen, a federal appeals court judge there.

The president also indicated that Allison Jones Rushing, a 38-year-old appellate judge from North Carolina, is on his short list. His team is also actively considering Kate Todd, the White House deputy counsel who has never been a judge but was a clerk for Justice Clarence Thomas.

The Mounting Clash Over the Vacant Seat

Democrats, led by presidential nominee Joe Biden, are protesting the Republicans’ rush to replace Ginsburg, saying voters should speak first, on Election Day, and the winner of the White House should fill the vacancy. Biden was appealing to GOP senators to “uphold your constitutional duty, your conscience” and wait until after the election.

The mounting clash over the vacant seat — when to fill it and with whom — injects new turbulence in the presidential campaign with the nation still reeling from the coronavirus pandemic that has killed nearly 200,000 Americans, left millions unemployed and heightened partisan tensions and anger.

The mounting clash over the vacant seat — when to fill it and with whom — injects new turbulence in the presidential campaign with the nation still reeling from the coronavirus pandemic that has killed nearly 200,000 Americans, left millions unemployed and heightened partisan tensions and anger.

Ginsburg, 87, died Friday of metastatic pancreatic cancer. She will lie in state at the U.S. Capitol this week, the first woman ever accorded that honor. First, her casket is to be on view midweek on the steps of the high court.

With just over a month before the election, McConnell said the Senate has “more than sufficient time.”

No nominee has won confirmation so quickly since Sandra Day O’Connor — with no opposition from either party — became the first woman to serve on the Supreme Court in 1981.

Both sides are mobilizing for a wrenching confirmation fight punctuated by crucial issues before the court — healthcare, abortion access and even the potential outcome of the coming presidential election. Some protesters showed up early Monday morning outside the homes of key GOP senators.

At a Trump rally later Monday in Ohio, people chanted, “Fill the seat!”

Four Republicans could halt a quick confirmation and Trump criticized Republican Sens. Susan Collins of Maine and Lisa Murkowski of Alaska for opposing a vote before elections. The president warned they would be “very badly hurt” by voters.

Others, including GOP Sens. Chuck Grassley of Iowa and Cory Gardner of Colorado, declined to join in opposing the president’s plan.

Vocal City Hall Rally: ‘We Are Telling You We Are Opening October 1st’