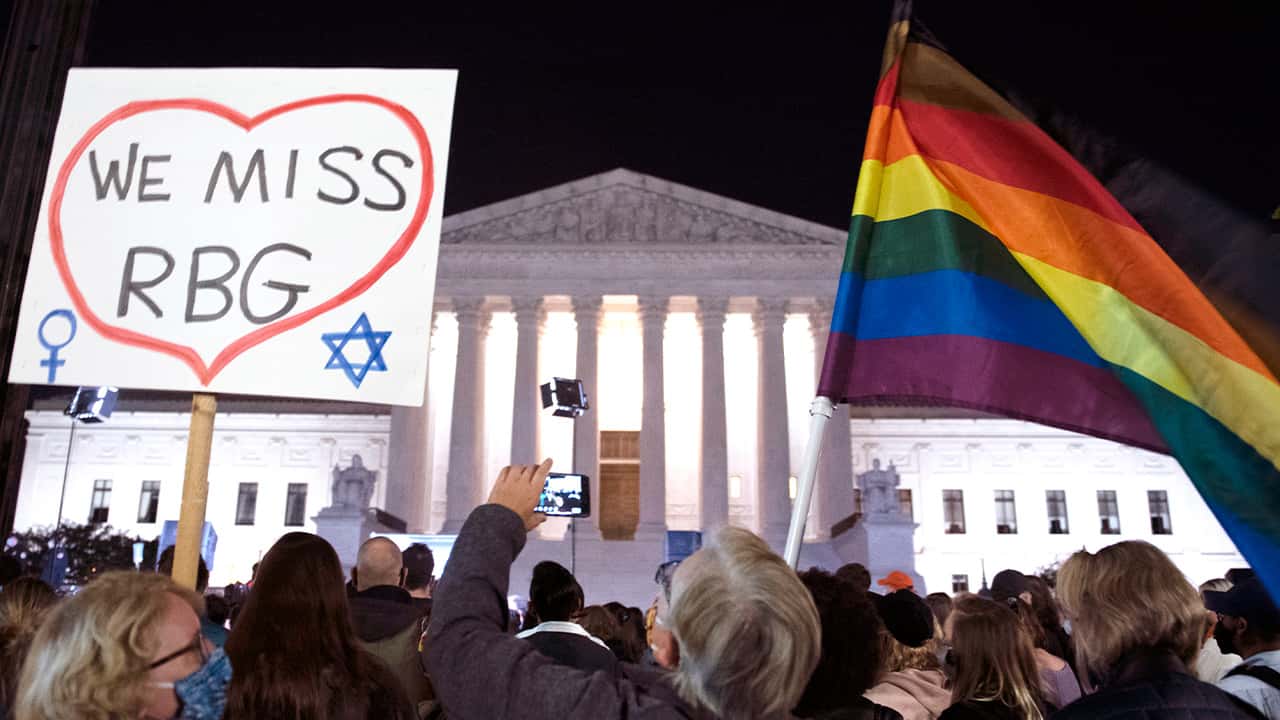 NEW YORK — Sure, there were the RBG bobbleheads, the Halloween getups, the lace collars, the workout videos. The “I dissent” T-shirts, the refrigerator magnets, the onesies for babies or costumes for cats. And yes, the face masks, with slogans like: “You can’t spell TRUTH without RUTH.”

But the pop culture status that Ruth Bader Ginsburg found — or rather, that found her — in recent years was just a side show, albeit one that amused her, to the unique and profound impact she had on women’s lives. First as a litigator who fought tenaciously for the courts to recognize equal rights for women, one case at a time, and later as the second woman to sit on the hallowed bench of the Supreme Court, Ginsburg left a legacy of achievement in gender equality that had women of varied ages and backgrounds grasping for words this weekend to describe what she meant to them.

“She was my teacher in so many ways,” said Gloria Steinem, the nation’s most visible feminist leader, in an interview. But even if she hadn’t known her personally, Steinem said, it was due to Ginsburg, who died Friday at 87 of complications of cancer, that “for the first time I felt the Constitution was written for me.”

“Now, it wasn’t written for me — it left out most folks, actually, when it was written,” Steinem added. But, she said, by forcing the courts to address issues like workplace discrimination, sexual assault and a host of others, Ginsburg “literally made me feel as if I had access to the law, because Ruth was there.”

But the extent of Ginsburg’s influence was felt not only by older women like Steinem, 86, who understood from experience the obstacles Ginsburg faced, such as not being able to find a job at a New York law firm despite graduating at the top of her class at Columbia Law School.

Younger women and girls also say they were inspired by the justice’s achievements, her intellect and her fierce determination as she pursued her career. Hawa Sall, 20, a first-generation college student in New York, said it was Ginsburg who inspired her to attend Columbia, where she’s now an undergraduate studying human rights and planning on law school.

“Her resilience, her tenacity, her graciousness through it all — she’s always been one of my biggest inspirations in life,” said Sall, who lives in Brooklyn where Ginsburg was born, and whose family comes from Mali and Senegal. “She’s what I’ve always wanted to be, and still want to be.”

Sall says she was fascinated by what she learned about Ginsburg when she attended an event at the Lower Eastside Girl’s Club in Manhattan for the 2015 book, “Notorious RBG,” by Irin Carmon and Shana Knizhnik (the title played on the name of Brooklyn rapper The Notorious B.I.G.) That book was part of a wave of rock-star like fame that enveloped Ginsburg in her later years on the bench, making her a hero to a younger generation: There was also a famed impression by Kate McKinnon on “Saturday Night Live,” a feature film, starring Felicity Jones as Ginsburg, and the hit documentary “RBG,” both in 2018.

Julie Cohen and Betsy West, who co-directed “RBG,” saw firsthand how women of all ages quickly identified with Ginsburg.

“We’d go to screenings … and afterward older women who had been through the kind of discrimination she faced as a young woman would be sobbing … because they knew what she was up against, and what she did to help them and their daughters and granddaughters,” West said.

But also, Cohen added: “She became a huge symbolic figure for young women and even girls in a way that we hadn’t anticipated. So many children came to the movie, often little girls dressed in little robes. … Girls seemed to find her just mesmerizing.”

West theorizes the fascination might have come from Ginsburg’s small stature. Her legacy, though, was nothing less than enormous, she said: “She changed the world for American women.”

“She meant a lot to the (women’s) movement,” Feeback said. “She’s been an inspiration. She’s brought America and women forward in a generation.”

Ginsburg first gained fame as a litigator for the Women’s Rights Project of the American Civil Liberties Union, which she directed in the ’70s. The project marked “a real turning point for situating women’s rights not just as a gender issue, but as a civil rights issue that affected all of us,” said Ria Tabacco Mar, its current head.

At the time, the Supreme Court had never applied the Constitution’s guarantee of “equal protection of the laws” to strike down a law because of gender discrimination. That changed in 1971 with a case in which Ginsburg helped persuade the high court to invalidate an Idaho law that called for choosing men over women to administer the estates of the dead. In this Oct. 29, 2015, photo provided by The Lower Eastside Girls Club, members of the club pose with author Shana Knizhnik, second from right, at a book launch event for “Notorious RBG: The Life and Times of Ruth Bader Ginsburg,” by Irin Carmon and Knizhnik, in New York. Younger women and girls say they were inspired by the late justice’s achievements, her intellect and her fierce determination as she pursued her career. (Allana Clarke/The Lower Eastside Girls Club via AP)

‘She Knows That RBG Made Girls Equal to Boys’

Two years later, she again prevailed — making her first oral argument before the high court she would later join — in the case of a female Air Force officer whose husband was denied spousal benefits that male officers’ wives automatically received.

“For every gender injustice that we see today, Ruth Bader Ginsburg saw it first, and she fought it first,” said Tabacco Mar.

Devi Rao, one of Ginsburg’s law clerks in 2013, said the justice had taught her that “law isn’t just about the law — it’s about the people whose lives are impacted by those laws.”

Rao, who now works on appellate cases for a civil rights firm, said Ginsburg “distinguished herself in a man’s world and on a man’s court without looking like them or sounding like them, but simply because they couldn’t deny the power of her ideas. She teaches women and girls not to count themselves out even though they don’t look like those in power.”

It’s that lesson that mothers like Brianne Burger hope their daughters will understand. Earlier this year, Burger posted a photo of her daughter Adi, 5, on Facebook, outfitted as RBG in black robe and glasses for a school dress-up day in Washington, D.C. The girl came home delighted, her mother said, that so many people recognized her costume.

“She still talks about that day,” said Burger.

Asked what Adi understands about Ginsburg, the mother replied: “She knows that RBG made girls equal to boys.”