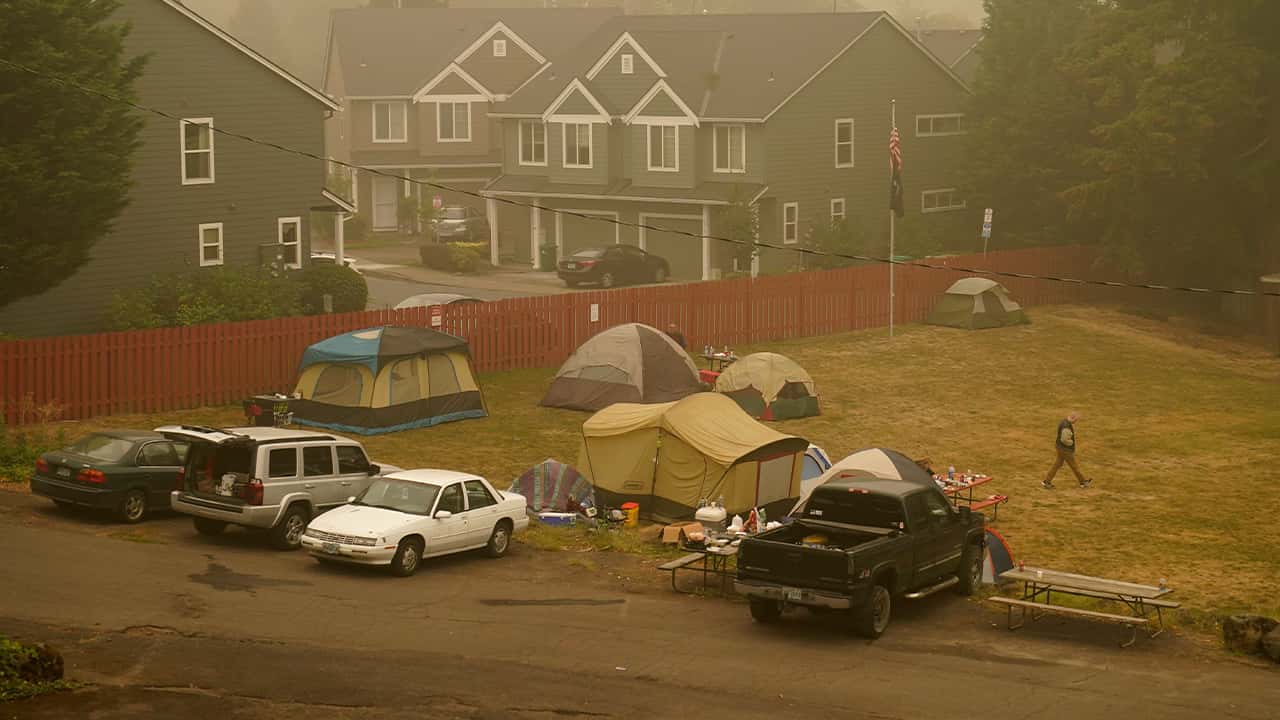 BEAVERCREEK, Ore. — With crews battling wildfires that have killed at least 35 people, destroyed neighborhoods and enveloped the West Coast in smoke, another fight has emerged: leaders in the Democratic-led states and President Donald Trump have clashed over the role of climate change ahead of his visit Monday to California.

California, Oregon and Washington state have seen historic wildfires that have burned faster and farther than ever before. Numerous studies in recent years have linked bigger wildfires in the U.S. to global warming from the burning of coal, oil and gas.

California, Oregon and Washington state have seen historic wildfires that have burned faster and farther than ever before. Numerous studies in recent years have linked bigger wildfires in the U.S. to global warming from the burning of coal, oil and gas.

The Democratic governors say the fires are a consequence of climate change, while the Trump administration has blamed poor forest management for the flames that have raced through the region and made the air in places like Portland, Oregon, Seattle and San Francisco some of the worst in the world.

Scientists say the wildfires are all but inevitable, but that the main drivers are plants and trees drying out due to climate change and more people living closer to areas that burn. Forest thinning and controlled burns have proven challenging to implement on the scale needed to combat those threats.

The governors have been blunt: Washington Gov. Jay Inslee on Sunday called climate change “a blowtorch over our states in the West.”

“It is maddening right now that when we have this cosmic challenge to our communities, with the entire West Coast of the United States on fire, to have a president to deny that these are not just wildfires, these are climate fires,” Washington Gov. Jay Inslee said Sunday on ABC’s “This Week.” California Gov. Gavin Newsom speaks to the media after he toured the North Complex Fire zone in Butte County on Friday, Sept. 11, 2020, outside of Oroville, Calif. Gov. Gavin Newsom toured the fire-ravaged region Friday and strongly asserted that climate change was evident and pledged to redouble efforts to “decarbonize” the economy. (Paul Kitagaki Jr./The Sacramento Bee via AP, Pool)

As Newsom toured a ghostlike landscape destroyed by flames Friday, he called out the “ideological BS” of those who deny the danger.

“The debate is over around climate change. Just come to the state of California, observe it with your own eyes,” he said.

He noted that just in the last month, California had its hottest August, with world-record-setting heat in Death Valley. It had 14,000 dry lightning strikes that set off hundreds of fires, some that combined into creating five of the 10 largest fires in the state’s recorded history. And it had back-to-back heat waves.

Oregon Gov. Kate Brown said about 500,000 acres typically burn each year, but just in the past week, flames have swallowed over a million acres, pointing to long-term drought and recent wild weather swings in the state.

“This is truly the bellwether for climate change on the West Coast,” she said Sunday on CBS’ “Face the Nation.” “And this is a wake-up call for all of us that we have got to do everything in our power to tackle climate change.”

At a rally in Nevada, Trump blamed the way states have run the land, saying “it is about forest management.” White House adviser Peter Navarro echoed that Sunday on CNN’s “State of the Union,” saying that for many years in California, “particularly because of budget cutbacks, there was no inclination to manage our forests.”

Forest management, which includes tree thinning and brush clearing, is costly, labor-intensive work that is effective in reducing fuel for wildfires. Millions of dollars are spent on such reduction efforts every year in Western states though many argue more needs to be done. The efforts can also be undercut when homeowners in rural areas don’t undertake similar efforts on their own properties. Shayanne Summers holds her dog Toph while wrapped in a blanket after several days of staying in a tent at an evacuation center at the Milwaukie-Portland Elks Lodge, Sunday, Sept. 13, 2020, in Oak Grove, Ore. “It’s nice enough here you could almost think of this as camping and forget everything else, almost,” said Summers about staying at the center after evacuating from near Molalla, Oregon which was threatened by the Riverside Fire. (AP Photo/John Locher)

Warnings of Low Moisture and Strong Winds Could Fan the Flames

Los Angeles Mayor Eric Garcetti accused Trump of perpetuating a lie that only forest management can curtail the massive fires seen in recent years. He pointed to drought and the need to reduce carbon emissions.

“Talk to a firefighter, if you think that climate change isn’t real,” the Democratic mayor said on CNN’s “State of the Union.”

Warnings of low moisture and strong winds could fan the flames in hard-hit southern Oregon to Northern California and last through Tuesday. Tens of thousands of people have fled their homes as the fast-moving flames turned neighborhoods to nothing but charred rubble and burned-out cars.

It isn’t clear if global warming caused the dry, windy conditions that have fed the fires in the Pacific Northwest, but a warmer world can increase the likelihood of extreme events and contribute to their severity, said Greg Jones, a professor and research climatologist at Linfield University in McMinnville, Oregon.

Warnings of low moisture and strong winds could fan the flames in hard-hit southern Oregon to Northern California and last through Tuesday. Tens of thousands of people have fled their homes as the fast-moving flames turned neighborhoods to nothing but charred rubble and burned-out cars.

At least 10 people have been killed in Oregon. Officials have said more people are missing, and the number of fatalities is likely to rise, though they have not said how high the toll could go as they search. In California, 24 people have died, and one person was killed in Washington state.

Firefighter Steve McAdoo, who has run from one blaze to another in Oregon for six days, said his neighbors in rural areas outside Portland should clear trees near their homes because a week like they just survived could happen again.

“I would think the way the climate is changing, this may not be the last time,” he said.

In the small southern Oregon town of Talent, Dave Monroe came back to his burned home, partly hoping he’d find his three cats.

“We thought we’d get out of this summer with no fires,” he said. “There is something going on, that’s for sure, man. Every summer we’re burning up.”