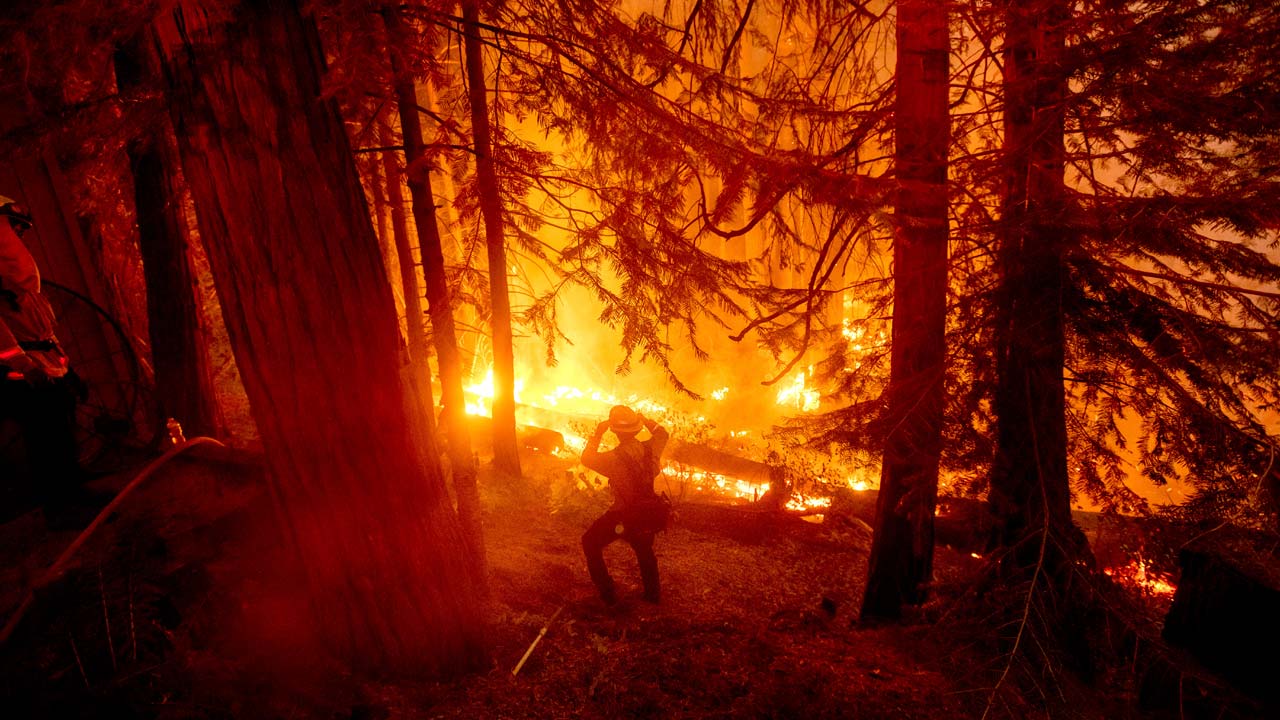 Six helicopters from the California National Guard airlifted about 150 people from Edison Lake on Tuesday morning as the Creek Fire continued to consume timber and structures in the foothills and mountains of Fresno and Madera counties with no containment.

The helicopters flew the evacuees to the military portion of Fresno Yosemite International airport, where they were undergoing medical evaluation, said Capt. Jason Sanchez of the state National Guard.

Those who without injuries were being released to family and friends in the area, Sanchez said. Those without a place to go were being transported to the alternative medical care site at the Fresno Convention Center.

“I’m relieved … really happy to be out of there,” said Isaac Rodriguez, a chef from San Diego.

Rodriguez was part of a group of hikers who started their trek in the Edison Lake area unaware of the Creek Fire, which began early Friday night.

“We thought it was a thunderstorm,” Rodriguez said. “We knew we were in trouble when they said we couldn’t leave. But everyone stepped up and really took care of each other.”

Isaac Rodriguez, a chef from San Diego, just got rescued from the Edison Lake area. pic.twitter.com/AiKawscDJM

Rescue choppers pulled out 164 people from the Sierra National Forest through the morning and were working to rescue 17 others, Gov. Gavin Newsom said during a briefing on Tuesday. The governor described pilots wearing night-vision goggles to find a place to land in the darkness of the early morning hours for the initial evacuations.

David Angulo took this video as he prepared to board this Chinook that arrived to rescue him and other campers and hikers after they became stuck in the #CreekFire ⁦@KCBSRadio⁩ pic.twitter.com/3txWSiwHkR

As of Tuesday morning, the Creek Fire had consumed nearly 144,000 acres and destroyed the iconic Cressman’s General Store and Gas Station on Tollhouse Road, just past the end of Highway 168.

Cal Fire reported that 65 structures had been destroyed, 45 of which were residences. About 5,300 structures are threatened, the agency said. Cressmans General Store is lost to flames. Video taken by the owner, Ty, as he left the mountain. When will this hell be over? #CreekFire #ShaverLake #PrayForUs pic.twitter.com/cb1BOqfNvo Click on this link for Creek Fire satellite map updates.

ROAD CLOSURES road due to the #creekfire

– Hwy. 168 at the roundabout in Prather pic.twitter.com/YE2TKh9Q5n

An Evacuation Warning has been issued for all residents in the Prather/Auberry area. The boundaries are Auberry Road to Millerton Road and Tollhouse Road to Nicholas Road to Highway 168.

An Evacuation Warning means there is a potential threat to life or property. Those who require additional time to evacuate and those with pets or livestock should leave now, the Sheriff’s Office said.

Cal Fire officials said in Tuesday morning’s incident report that “the fire continued to grow under extreme conditions” on Monday night and into the morning. “Fuels continued to be the main influence of the fire, with the heavy fuel loading from the dead and down material. Timber in the area has approximately 80-90 percent tree mortality from the bark beetle.”

Officials also said that the mountain community of Shaver Lake “was threatened throughout the night” and the Creek Fire crossed over Highway 168 and was moving south. Jeremy Hedrick holds his son Jeep as smoke from the Creek Fire fills the air in a marina, where campers were being held due to impassable roads, caused by the fire Monday, Sept. 7, 2020, in Shaver Lake. (AP/Marcio Jose Sanchez)

The U.S. Forest Service on Monday decided to close all eight national forests in the Sierra Nevada and Southern regions and to shutter campgrounds statewide.

“Existing fires are displaying extreme fire behavior. New fire starts are likely. Weather conditions are worsening, and we simply do not have enough resources to fully fight and contain every fire,” said Randy Moore, a forester for the Forest Service’s Pacific Southwest region that covers California.

Lynne Tolmachoff, spokeswoman for the California Department of Forestry and Fire Protection, known as Cal Fire, said it’s “unnerving” to have reached a record for acreage burned so soon. September and October usually are the worst months for fires because vegetation has dried out and high winds are more common.

Fire officials say the size of the Creek Fire has now grown to 135,523 acres, almost doubling in size since the morning. It is still at 0% containment. A total of 1,060 fire personnel are battling the blaze.

The Madera County Sheriff’s Office says mandatory evacuation orders are being developed for both sides of Bass Lake and that areas east of Highway 41 in Oakhurst, Coasegold, and O’Neals are moving to warning status.

Fresno County Sheriff’s Office Lt. Brandon Pursell told reporters Monday night, “This is one of the largest and most dangerous fires in the history of Fresno County. I don’t think everyone understands that. Playing that game of ‘how long can I wait’ is just foolish.”

Mandatory evacuation orders are being developed for Bass Lake. This will include both sides of the lake. Residences east of Rd 222/Rd 432 and Road 426/Rd 222 will be evacuated. Areas east of Hwy 41 in Oakhurst, Coarsegold, O’Neal’s moving to warning status. Creek Fire: ‘We Didn’t Used To Have These Kinds of Fires.” Logger Blames Poor Forest Management