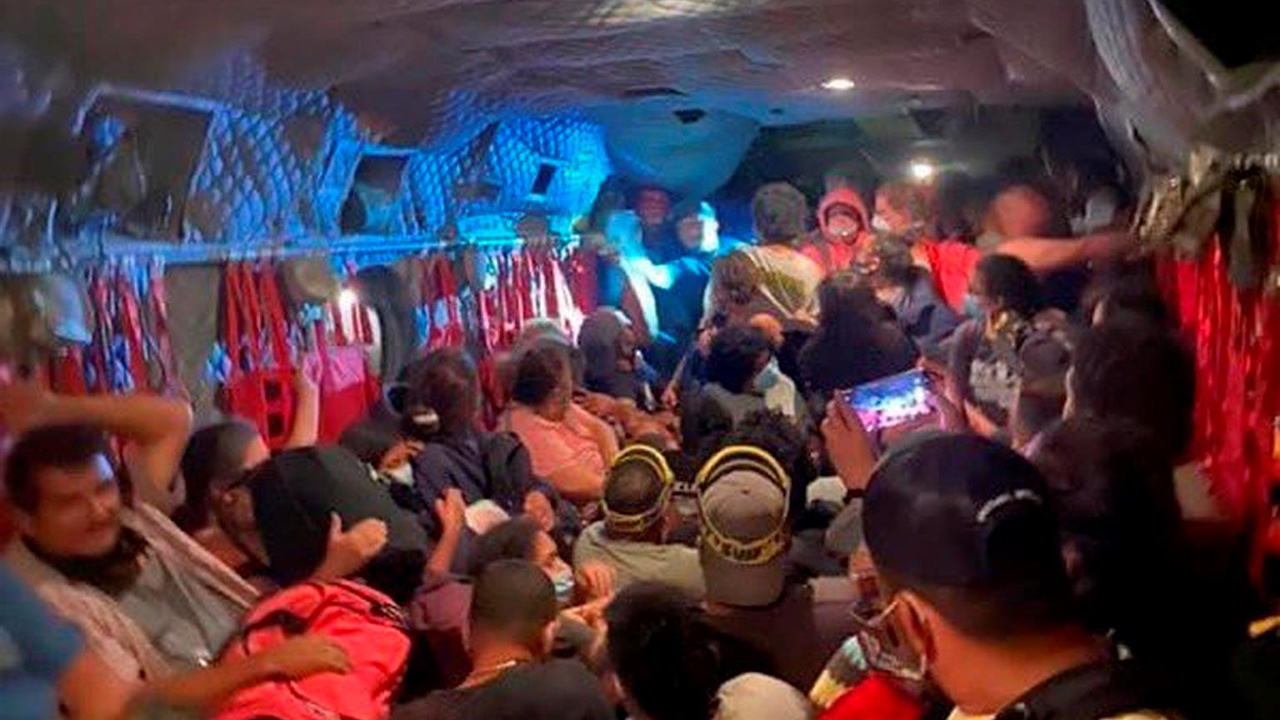 Rescuers in military Black Hawk and Chinook helicopters airlifted at least 207 people to safety after an explosive wildfire trapped them at Mammoth Pool late Saturday night.

The California Office of Emergency Services said Black Hawk and Chinook helicopters were used for the rescues, which continued overnight.

Simply extraordinary, lifesaving work by the @CalGuard airlifting more than 200 people to safety overnight from the imminent danger of the #CreekFire The National Guard stands Always Ready, Always There to support our communities and nation in times of need. pic.twitter.com/MybDKESipJ

Those with injuries — which included severe burns and broken bones — were transported to Fresno area hospitals.

At one point Saturday morning, about 1,000 people at Mammoth Pool were told their only hope of survival might be to jump into the lake.

A firefighter on the scene messaged a relative that lives were spared because the fire ran out of fuel.

Mammoth Pool is about 88 miles northeast of Fresno of Oakhurst on a winding, mountainous road that ends at the lake, which is at 3,300 feet elevation. In this Saturday, Sept. 5, 2020, photo released by the California National Guard, shows the view from a Cal Guard Chinook helicopter last night rescuing people trapped after the Creek Fire in central California left them stranded. More than 200 people were airlifted to safety after a fast-moving wildfire trapped them in a popular camping area in California’s Sierra National Forest. The California Office of Emergency Services said Black Hawk and Chinook helicopters were used for the rescues that began Saturday night and continued overnight. (California National Guard via AP)

Ashley Wagner was among those rescued, along with two relatives and a friend. They were trapped in Logan’s Meadow behind Wagner’s Store, a 63-year-old business run by her aunt that was destroyed.

“My family’s history just went up in flames,” Wagner told the station.

Wagner’s was a staple of the Mammoth Pool community. Campers picked items they might have forgotten or run out of. And, fishermen went to find out what lures and baits were working best.

A photo tweeted by the California National Guard showed at least 20 evacuees crammed inside one helicopter, crouched on the floor clutching their belongings. In another photo taken on the ground from a helicopter cockpit, the densely wooded hills surrounding the aircraft were in flames.

Had to cut our Shuteye climbing trip short today due to the Creek Fire. We ended up going the long way around after fire cut off Mammoth Pool road. pic.twitter.com/DbrY7XHe9d

The wildfire, named the Creek Fire, started Friday and by Saturday afternoon exploded in size, jumped the San Joaquin River and cut off the only road into the Mammoth Pool Campground, national forest spokesman Dan Tune said. At least 2,000 structures were threatened in the area.

Tune said the campers were told to shelter in place until fire crews, aided by water-dropping aircraft, could gain access to the site.

The fire had charred more than 71 square miles of timber with no containment. Temperatures in the area topped 100 degrees (38 Celsius). Mammoth Pool is surrounded by thick pine forests and is a popular destination for boating and fishing.

Bone-dry conditions and the hot weather fueled the flames once the fire started and it grew seven-fold to 55 square miles within a few hours Saturday afternoon.

“Once the fire gets going, it creates its own weather, adding wind to increase the spread,” Tune said.

Lindsey Abbott and her family were guided to safety by a stranger they followed down from their campsite near Whisky Falls.

“It was so hot, you could feel the flames going through the window,” she told ABC30 in Fresno.

Ashley Wagner was among those rescued, along with two relatives and a friend. They were trapped in Logan’s Meadow behind Wagner’s Store, a 63-year-old business run by her aunt that was destroyed.

“My family’s history just went up in flames,” Wagner told the station.

‘It Looks Like Mars Out There’: Creek Fire Threatens Shaver Lake