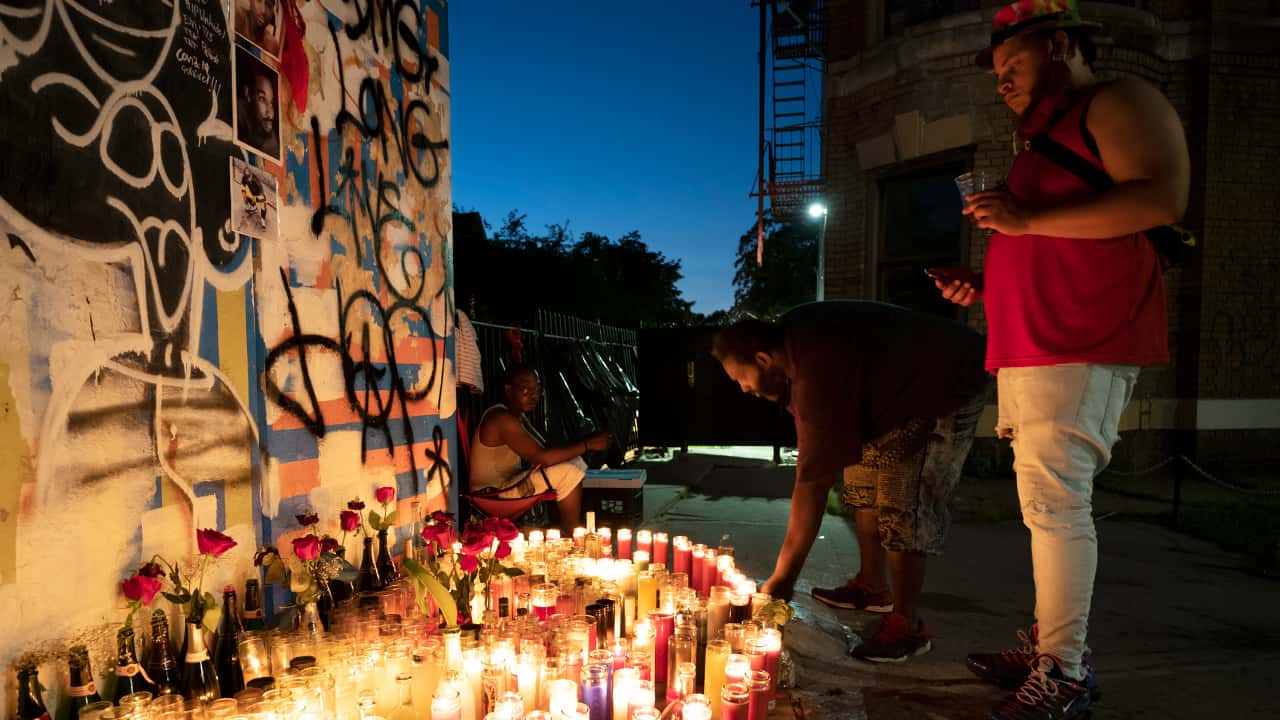 At almost every turn at the Republican National Convention, speakers from the president on down portrayed American cities like Portland, Oregon, New York and Chicago as lawless Democratic wastelands that have been overrun with violence, looting and destruction that is forcing residents to flee for safer locales.

“It’s a pretty day and we feel just perfectly safe as long as we’ve got our masks on. I don’t see why there’s any need to be scared to walk around out here.” — Benjamin Green, a warehouse forklift operator from Beaverton, Oregon

The reality on the ground is much more nuanced.

In downtown Portland this week, tourists from Texas enjoyed gyros at a food cart, a couple from the suburbs soaked up the afternoon sun and a recent transplant from Indiana strummed an acoustic guitar outside a shuttered Apple store, in front of a mural that’s dedicated to Black people killed by police.

“It’s a pretty day and we feel just perfectly safe as long as we’ve got our masks on,” said Benjamin Green, a warehouse forklift operator from Beaverton, Oregon. “I don’t see why there’s any need to be scared to walk around out here.”

The picture of American cities overwhelmed by violence has become a central theme of the 2020 presidential race. In his convention acceptance speech Thursday night, President Donald Trump called for “law and order” and said the country can never allow “mob rule.” But for the most part that portrait doesn’t line up with reality.

In Portland, protests have played out for more than 90 consecutive nights, frequently ending with vandalism. Hundreds of people have been arrested. But the disruption is mostly concentrated in small pockets of the city.

In those spots, including the two blocks around the federal courthouse and around some police precincts, graffiti is common and stores and restaurants are open, but boarded up. Downtown businesses this week urged the mayor to do more to address the problems.

In contrast, most neighborhoods in the city of nearly 700,000 people are untouched by the violence. Parks attract young families and joggers, and bars and restaurants cater to customers with outdoor seating areas spaced out for COVID-19.

“It seems business as usual,” said Garrett Martin, who was visiting downtown from Fort Worth, Texas, with his fiancee. “We’ve been to a few shops. It’s just the same regulations as everywhere else — we have to wear masks.”

Experts say violent crime has generally remained stable and low. Still, homicides and shootings are on the rise in many cities, but experts say it’s too soon to say whether the trend will continue, or what’s driving it. Double-digit unemployment, frustrations over the pandemic and tensions over police violence could all be factors.

In many major cities, there was looting and some property destruction during the height of the George Floyd racial justice protests, but order was restored months ago in most places.

David Abrams, a professor at the University of Pennsylvania, created a database tracking crime statistics in about 25 major cities during the pandemic.

The numbers are nuanced: overall violent crime is down, but there have been increases in homicides and shootings over the summer. For the first half of the year, he said, homicides were up 20% in the cities they follow. Abrams cautions that it can be misleading to focus on crime statistics over a short time frame, such as week-to-week or month-to-month.

The last time New York saw homicides on the scale of 2020 was in 2012, when there were 419. Back then, it was something to celebrate — the lowest number of murders in four decades. Then-Mayor Mike Bloomberg proclaimed New York City the safest big city in America.

In New York City, police recorded 280 killings through Aug. 23, up from 208 during the same period last year. Victims include a teacher hit by a stray bullet while walking his dog and a 1-year-old boy shot in his stroller.

The last time New York saw homicides on the scale of 2020 was in 2012, when there were 419. Back then, it was something to celebrate — the lowest number of murders in four decades. Then-Mayor Mike Bloomberg proclaimed New York City the safest big city in America.

That’s around the time that Kelly Baillon moved into her neighborhood just south of Prospect Park in Brooklyn. Baillon said she had never heard a gunshot — until Aug. 14, when her neighbor was shot in the chest outside their apartment building in the middle of the afternoon. Within a week, three more men were shot in her neighborhood, and two died.

“I’m afraid to walk outside,” Baillon said. “I can’t leave my house without feeling like I’m about to start crying. Just sheer anxiety.”

Feeling unsafe, she flew to visit family near Bend, Oregon.

In Minneapolis, city streets have mostly returned to the way they were before the protests and destruction that rocked the city for days after Minneapolis police killed Floyd on May 25, said Michelle Phelps, a sociology professor who studies crime and policing at the University of Minnesota.. But there are still some reminders of the violence, in the form of burned out buildings.

Floyd’s killing sparked thousands of protests in cities and small towns across the nation. Nearly all were peaceful, and about 95% of those counted so far by the group crowdcounting.org did not have any property damage.

On Wednesday, a new wave of unrest hit Minneapolis, but in a limited area. False rumors of another police shooting of a Black man drove people downtown, where some then damaged, burglarized or burned businesses. Two police officers were injured. It turned out that the man, a suspect in a homicide, had shot himself as police were closing in.

Focusing just on that chaos misses the deeper story, Phelps said. The rise in homicides is happening in the context of a pandemic that has disrupted lives and amid the public breach of trust that was Floyd’s killing.

“When people are disconnected from their jobs, when people’s employment is terminated or their hours cut back, when whole families are struggling to feed themselves, we have a mass epidemic of homelessness. … We should expect all of that to influence crime as well,” Phelps said. “It’s a powder keg.”

The highest risk of violence, she notes, is borne by young men of color in the poorest neighborhoods.

Phelps, a self-described white lady who lives in an upper-middle class neighborhood, said she knows no one who has moved out of the city, contrary to the assertions by South Dakota Gov. Kristi Noem, who claimed Wednesday night that people who could afford to were fleeing cities.

Back in Portland, Mayor Ted Wheeler this week took exception to the portrayal of his city as lawless.

“The current national depiction of our city as a dark dystopia with nonstop violence is a lie,” he said.