WASHINGTON — President Donald Trump blasted Joe Biden as a hapless career politician who will endanger Americans’ safety as he accepted his party’s renomination on the South Lawn of the White House. While the coronavirus kills 1,000 Americans each day, Trump defied his own administration’s pandemic guidelines to speak for more than an hour to a tightly packed, largely maskless crowd.

“We have spent the last four years reversing the damage Joe Biden inflicted over the last 47 years.” — President Donald Trump

Facing a moment fraught with racial turmoil, economic collapse and a national health emergency, Trump delivered a triumphant, optimistic vision of America’s future Thursday. But he said that brighter horizon could only be secured if he defeated his Democratic foe, who currently has an advantage in most national and battleground state polls.

“We have spent the last four years reversing the damage Joe Biden inflicted over the last 47 years,” Trump said, referring to the former senator and vice president’s career in Washington.

When Trump finished, a massive fireworks display went off by the Washington Monument, complete with explosions that spelled out “Trump 2020.”

His acceptance speech kicked off the final stretch of the campaign, a race now fully joined and, despite the pandemic, soon to begin crisscrossing the country. Trump’s pace of travel will pick up to a near daily pace while Biden, who has largely weathered the pandemic from this Delaware home, announced Thursday that he will soon resume campaign travel.

Teasing once more that a vaccine could arrive soon, the president promised victory over the coronavirus pandemic, which has killed more than 180,000 people in the United States, left millions unemployed and rewritten the rules of society. And, in the setting for his speech, Trump sought to project a sense of normalcy by throwing caution about the coronavirus aside.

All week long, Republicans at the nonconvention convention tried to create the illusion that the pandemic is largely a thing of the past. The rows of chairs on the South Lawn were inches apart. Protective masks were not required, and COVID-19 tests were not administered to everyone.

As his speech brought the scaled-back Republican National Convention to a close, Trump’s incendiary rhetoric risked inflaming a divided nation reeling from a series of calamities, including the pandemic, a major hurricane that slammed into the Gulf Coast and nights of protest after Jacob Blake, a Black man, was shot by a white Wisconsin police officer. Prosecutors charged a white, 17-year-old police admirer with the fatal shooting of two protesters and wounding of a third.

The president spoke from a setting that was both familiar and controversial. Despite tradition and regulation to not use the White House for purely political events, a huge stage was set up outside the executive mansion, dwarfing the trappings for some of the most important moments of past presidencies. The speaker’s stand was flanked by dozens of American flags and two large video screens. 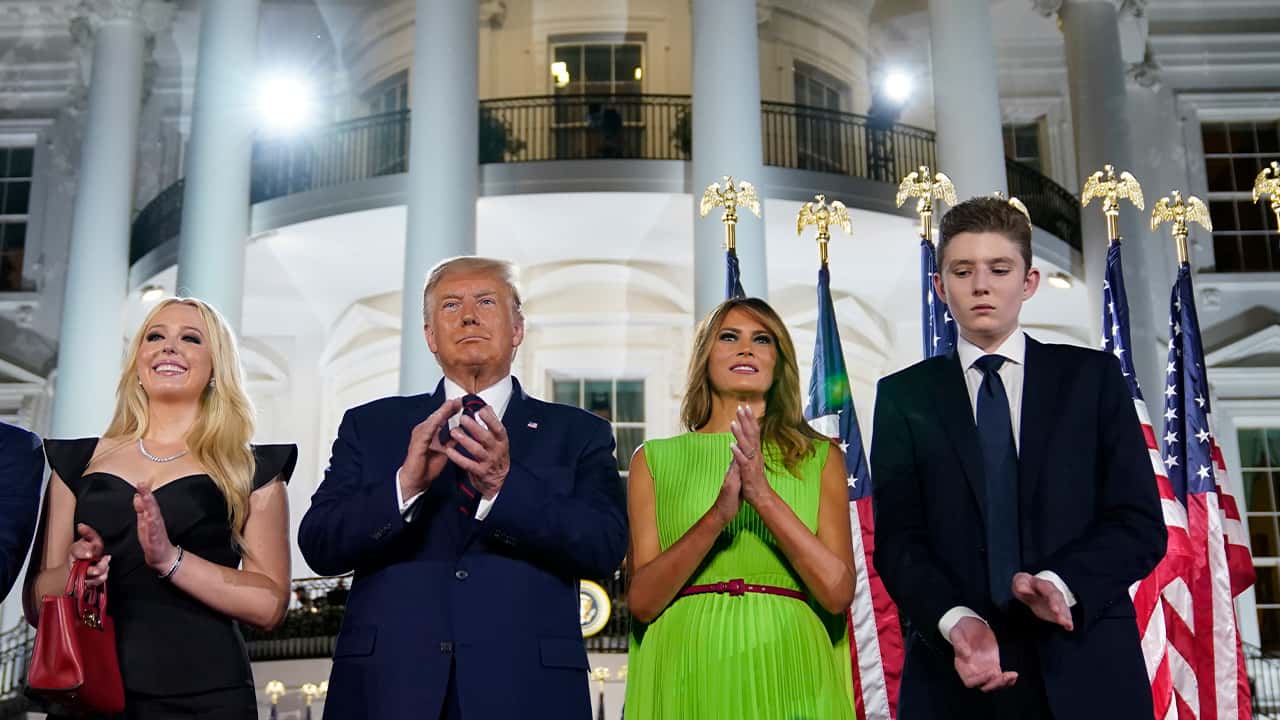 He Mocked His Opponent’s Record and Famous Empathy

Trying to run as an insurgent as well as incumbent, Trump rarely includes calls for unity, even in a time of national uncertainty. Presenting himself as the last barrier protecting an American way of life under siege from radical forces, Trump has repeatedly, if not always effectively, tried to portray Biden — who is considered a moderate Democrat — as a tool of extreme leftists.

In a week of racial tumult, Republicans have claimed that the violence that has erupted in Kenosha, Wisconsin, and some other American cities is to be blamed on Democratic governors and mayors and would only grow worse under a Biden administration. That drew a stern rebuke from Biden.

“Every example of violence Donald Trump decries has happened on his watch. Under his leadership. During his presidency,” Biden tweeted. He has accused Trump of “rooting for more violence” to benefit him politically.

Both parties are watching with uncertainty the developments in Wisconsin and cities across the nation with Republicans leaning hard on support for law and order — with no words offered for Black victims of police violence — while falsely claiming that Biden has not condemned the lawlessness.

Rudy Giuliani, Trump’s personal attorney and New York City’s former mayor, declared that Democrats’ “silence was so deafening that it reveals an acceptance of this violence because they will accept anything they hope will defeat President Donald Trump.”

Along with Biden, running mate Kamala Harris offered counter-programming for Trump’s prime-time speech. She delivered a speech a half-mile from the White House, declaring, “Donald Trump has failed at the most basic and important job of a president of the United States: He failed to protect the American people, plain and simple.”

Though some of the speakers, unlike on previous nights, offered notes of sympathy to the families of Black men killed by police, Giuliani also took aim at the Black Lives Matter movement, suggesting that it, along with antifa, was part of the extremist voices pushing Biden to “execute their pro-criminal, anti-police policies” and had “hijacked the protests into vicious, brutal riots.”

Along with Biden, running mate Kamala Harris offered counter-programming for Trump’s prime-time speech. She delivered a speech a half-mile from the White House, declaring, “Donald Trump has failed at the most basic and important job of a president of the United States: He failed to protect the American people, plain and simple.”

Some demonstratiors took to Washington’s streets Thursday night, ahead of a march planned for Friday. New fencing was set up along the White House perimeter to keep the protesters at bay, but some of their shouts and car horns were clearly audible on the South Lawn, where more than 1,500 people gathered. Soon after Trump began talking, the horns and sirens — which came through occasionally to the millions watching at home — caused some people in the last row to turn around and look for the source of the disturbance. 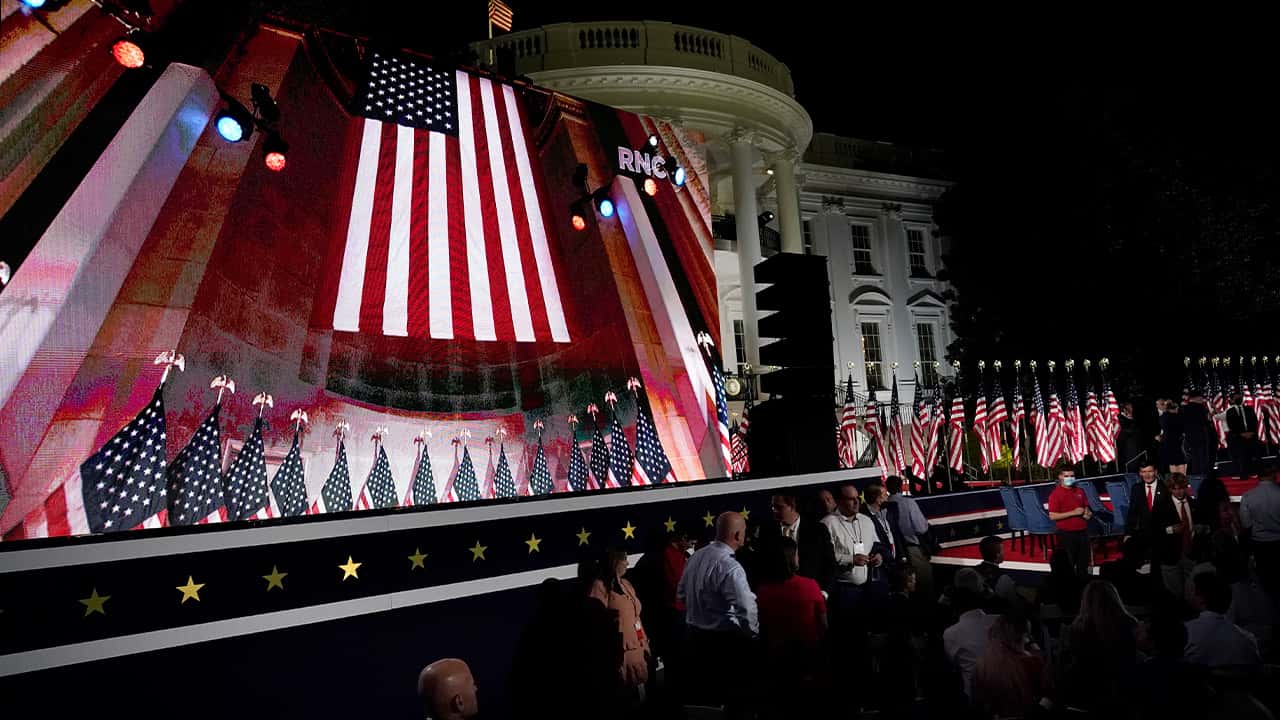 The Republican National Convention video is displayed on a screen as people watch from the South Lawn of the White House on the fourth day of the convention Thursday, Aug. 27, 2020, in Washington. (AP Photo/Alex Brandon)

After the convention concluded, there were skirmishes as protesters yelled and threw water bottles at police at the historic St. John’s Church near Black Lives Matter Plaza. There were some arrests.

Trump, who has defended his handling of the pandemic, touted an expansion of rapid coronavirus testing. The White House announced Thursday that it had struck a $750 million deal to acquire 150 million tests from Abbott Laboratories to be deployed in nursing homes, schools and other areas with populations at high risk.

Most of the convention has been aimed at former Trump supporters or nonvoters, and has tried to drive up negative impressions of Biden so that some of his possible backers stay home. Many of the messages were aimed squarely at seniors and suburban women.

Four years ago, Trump declared in his acceptance speech that “I alone can fix” the nation’s woes, but he has found himself asking voters for another term at the nadir of his presidency, amid the devastating pandemic, crushing unemployment and real uncertainties about schools and businesses reopening.

Another one million Americans filed for unemployment benefits last week, in numbers released Thursday. And the U.S. economy shrank at an alarming annual rate of 31.7% during the April-June quarter as it struggled under the weight of the viral pandemic. It was sharpest quarterly drop on record.