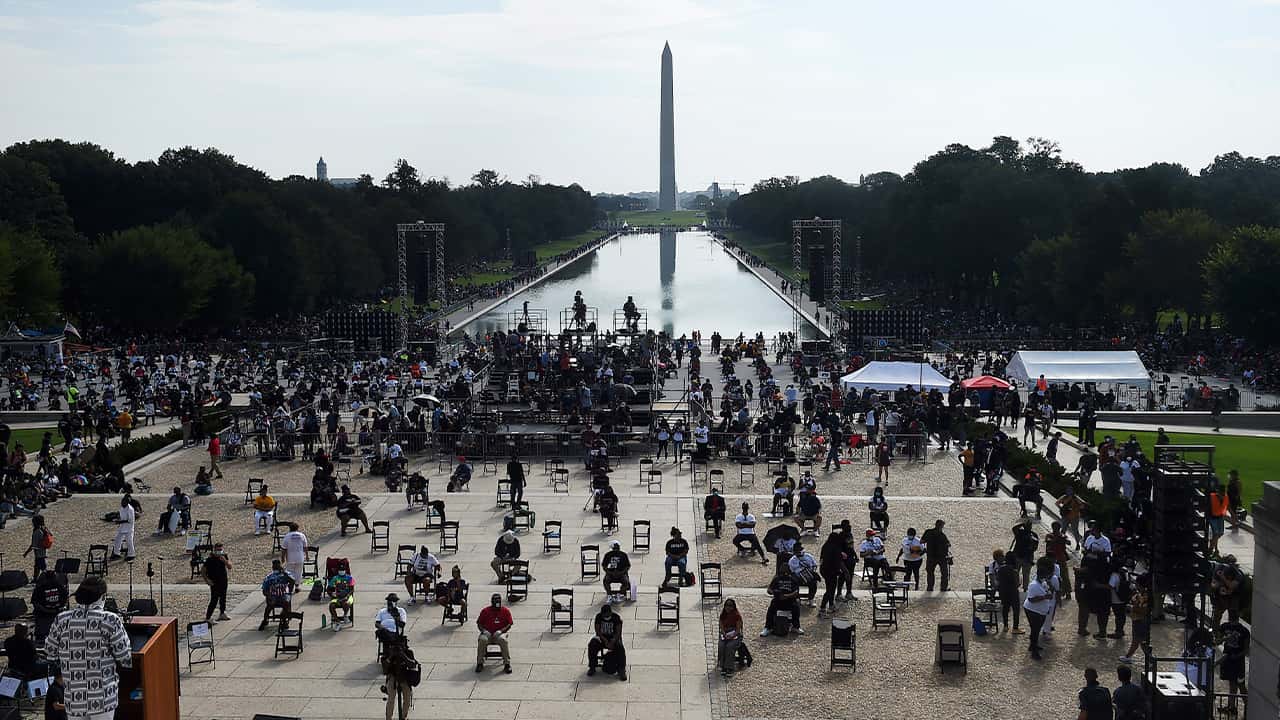 WASHINGTON — Capping a week of protests and outrage over the police shooting of a Black man in Wisconsin, civil rights advocates began highlighting the scourge of police and vigilante violence against Black Americans at a commemoration of the 1963 March on Washington for Jobs and Freedom.

An estimated thousands have gathered Friday near the steps of the Lincoln Memorial, where the Rev. Martin Luther King, Jr. delivered his historic “I Have A Dream” address, a vision of racial equality that remains elusive for millions of Americans.

And they are gathering on the heels of yet another shooting by a white police officer of a Black man — this time, 29-year-old Jacob Blake in Kenosha, Wisconsin, last Sunday — sparking days of protests and violence that left two dead.

“I want to give space for Black people in the crowd to say they are not okay,” said Jumaane Williams, New York City’s public advocate, who addressed march attendees shortly after the program began.

“We are like the nameless grandmothers who got in the streets and said ‘We will make you live up to what America says she is,’” Williams said. “We are here. We’re not going anywhere.”

Early on, the march was shaping up to be the largest political gathering in Washington since the coronavirus pandemic began. Many attendees showed up wearing T-shirts bearing the image and words of the late Rep. John Lewis who, until his death last month, was the last living speaker at the original March on Washington for Jobs and Freedom, which went on to become one of the most famous political rallies in U.S. history. and one of the largest gatherings at the nation’s capital with over 200,000 people advocating for social change. Megan Dogans of Denver, arrives to attend the March on Washington, Friday Aug. 28, 2020, at the Lincoln Memorial in Washington, on the 57th anniversary of the Rev. Martin Luther King Jr.’s “I Have A Dream” speech. (AP Photo/Alex Brandon)

The thousands of participants that were streaming in for the march late Friday morning stood in lines that stretched for several blocks, as organizers insisted on taking temperatures as part of coronavirus protocols. Organizers reminded attendees to practice social distancing and wear masks throughout the program.

Later in the day, Martin Luther King III, a son of the late civil rights icon and the Rev. Al Sharpton, whose civil rights organization, the National Action Network, planned Friday’s event, are expected to deliver keynote addresses that show the urgency for federal policing reforms, to decry racial violence, and to demand voting rights protections ahead of the November general election.

And to underscore the urgency, Sharpton has assembled the families of an ever-expanding roll call of victims: Blake, George Floyd, Breonna Taylor, Rayshard Brooks, Ahmaud Arbery, Trayvon Martin, and Eric Garner, among others.

Arbery and Martin both were killed by white men who pursued them with guns.

Following the commemorative rally, participants will march to the Martin Luther King, Jr. memorial in West Potomac Park, next to the National Mall, and then disperse.

Turnout in Washington was expected be lighter than initially intended due to city-imposed coronavirus pandemic restrictions that limit out-of-state visitors to the nation’s capital. To that end, the National Action Network organized a handful of satellite march events in South Carolina, Florida and Nevada, among others.

While participants march in Washington, Sharpton has called for those in other states to march on their U.S. senators’ offices and demand their support of federal policing reforms. Sharpton said protesters should also demand reinvigorated U.S. voter protections, in Lewis’ memory.

In June, the Democrat-controlled House of Representatives passed the George Floyd Justice In Policing Act, which would ban police use of stranglehold maneuvers and end qualified immunity for officers, among other reforms. Floyd, a Black man, died May 25 after a white police officer in Minneapolis held a knee to the man’s neck for nearly eight minutes, sparking weeks of sustained protests and unrest from coast to coast.

In July, following Lewis’ death, Democratic senators reintroduced legislation that would restore a provision of the historic Voting Rights Act of 1965 gutted by the U.S. Supreme Court in 2013. The law previously required states with a history of voter suppression to seek federal clearance before changing voting regulations.

Both measures are awaiting action in the Republican-controlled Senate.

“We’re demanding that that be enacted,” King told the Associated Press on Thursday. “The senators won’t even take action on it. That gives us an opportunity to say, ‘OK, we gave you guys a chance, we as the people, as Black people, as white people, as Latinos and Hispanics and we’re going to vote you out.’”

Later in the evening, the Movement for Black Lives, a coalition of more than 150 Black-led organizations that make up the broader Black Lives Matter movement, will hold its virtual Black National Convention.

The convention will coincide with the unveiling of a new Black political agenda intended to build on the success of this summer’s protests. The platform will deepen calls for defunding police departments in favor of investments to healthcare, education, housing and other social services in Black communities, organizers said.