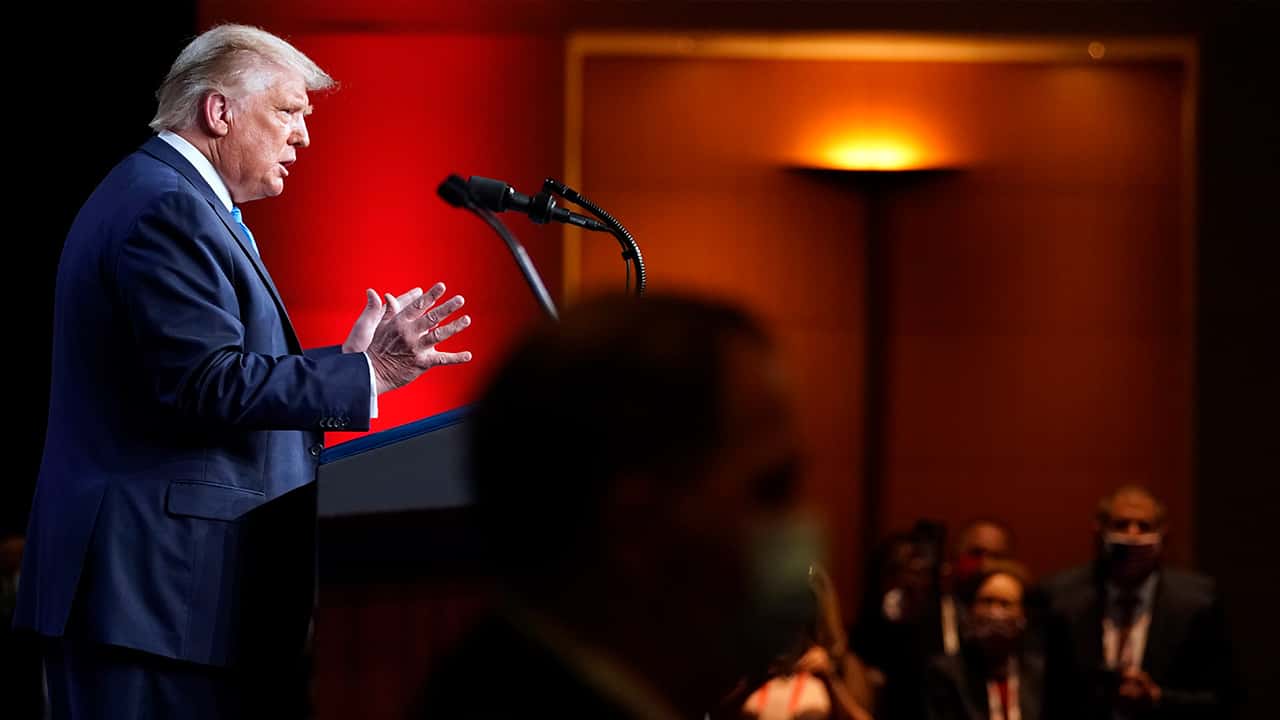 WASHINGTON — Four years ago, Donald Trump accepted the Republican Party’s nomination for president with a dark convention speech that painted a dystopian portrait of America in decline and he offered a singular solution: himself.

In 2016, his message was “I alone can fix it.” This time, while trailing in the polls to Democrat Joe Biden, he will offer himself as the last remaining defense against radical forces threatening the American way of life.

Though Trump has been president for three-and-a-half years, his rhetoric about the state of the nation has remained bleak. As he prepares to deliver his second acceptance speech on Thursday, the president faces a country in crisis, one gripped by a once-in-a-century pandemic, a battered economy, a racial reckoning and a massive hurricane slamming the Gulf Coast.

Though he will promise national greatness, there was little expectation he would deliver a message designed to unify the divided electorate.

In 2016, his message was “I alone can fix it.” This time, while trailing in the polls to Democrat Joe Biden, he will offer himself as the last remaining defense against radical forces threatening the American way of life.

Aides have closely guarded details of the address, which was being revised the night before Trump was to speak from the White House South Lawn. While Trump has centered his recent campaign speech on anarchists that he depicts overrunning city streets, aides signaled that Thursday’s remarks will not be as dark as his infamous “American carnage” inaugural address.

Trump will describe America as a work in progress, one that is not perfect but has achieved much. It’s an argument meant to offer a contrast with Democrats whom the president has described as not loving their country. In a similar vein, aides said, Trump would speak to progress made on combating the coronavirus, which has been treated as something of an afterthought during much of the convention although it is still killing 1,000 Americans a day.

The Trump Campaign Has Struggled To Make This a Choice Election

But it is Trump’s handling of the pandemic that has sent him tumbling in the polls and maximized the pressure around his speech. While aides recognize that few Biden supporters are likely to switch sides, the campaign’s goal with the speech is to set up a “permissions structure” for Republicans who have defected from Trump over his rhetoric or policies to come home.

“He needs to give those people who don’t approve of him an excuse to be for him,” said Ari Fleischer, press secretary for President George W. Bush.

Fleischer said Trump should speak personally about his experiences with COVID-19 — including friends lost to the virus. While much of the GOP convention has been about energizing Trump’s base, Fleischer also saw openings for Trump to address the public’s concerns about social unrest and crime, particularly after violence erupted in Kenosha, Wisconsin, where a white officer shot a Black man seven times.

The Trump campaign has struggled to make this a choice election. So far, voters have instead viewed it as a referendum on how the president has handled a pandemic that has killed more than 175,000 Americans and left millions unemployed.

Trump Met With Aides Wednesday Afternoon To Edit the Speech

Most of the convention has been aimed at former Trump supporters or nonvoters, and has tried to drive up negative impressions of Biden so that some of his possible backers stay home. Aides said Trump is expected to deliver some direct attacks on his Democratic opponent and will sharply juxtapose the far left — whom he argues has Biden in its thrall — with the rest of the nation.

But Jeff Shesol, who served as a speechwriter for President Bill Clinton, said Trump should use the moment to try to broaden his appeal to moderates and independents.

“Here’s a guy who’s never had 50 percent approval at any point in his presidency, who’s down in the polls considerably nationally and in many of the battleground states,” Shesol said. “If there ever was an occasion for someone to sort of extend his arms and sweep more people in, if he conceivably could, it would be this moment.”

“Yet it would be unwise to suggest that he’s going to do it,” Shesol said, “or that he, you know, is capable of doing it.”

Trump met with aides Wednesday afternoon to edit the speech before traveling to Baltimore to support Vice President Mike Pence’s turn in the convention spotlight. Further revisions could come until shortly he gives the speech.

New security fencing went up around the perimeter of the White House complex to prepare for possible protesters — some in town for a civil rights march on Friday. Aides were not certain if the noise from protesters would be heard during the speech. Earlier in the summer, demonstrators were audible during some outdoor presidential events.

More than 1,000 people are expected to be on the South Lawn, a sizable gathering in the pandemic. Masks are not required, according to the invitation by the Republican National Committee, and coronavirus tests will not be offered to all guests.

More than 1,000 people are expected to be on the South Lawn, a sizable gathering in the pandemic. Masks are not required, according to the invitation by the Republican National Committee, and coronavirus tests will not be offered to all guests.

Stripped of the ability to do his trademark bill rallies, Trump has few set pieces left in the race’s remaining 68 days to overtake Biden. Beyond the fall debates, Thursday’s speech may be his biggest moment, but historians say there are few acceptance speeches that have truly altered races.

Franklin Roosevelt’s 1932 speech, in which he laid out the New Deal, set the course for his time in office. George H.W. Bush’s 1988 speech, which helped him win that year, also tripped up his reelection bid four years later after he broke his “read my lips: no new taxes” promise, said presidential historian Julian Zelizer of Princeton University.

“He’ll offer a few lines, I’m sure, about building a consensus,” Zelizer said. “But the focus will be divisive comments, dark rhetoric and blaming his failures on his enemy. It will be classic Trumpism.”

Fed: Rates To Stay Ultra-Low Even After Inflation Picks up