LAKE CHARLES, La. — Hurricane Laura pounded the Gulf Coast with ferocious wind and torrential rain Thursday and unleashed a wall of seawater that could push 40 miles inland as the Category 4 storm roared ashore in Louisiana near the Texas border. At least one person was killed.

Louisiana took the brunt of the damage when the system barreled over Lake Charles, an industrial and casino city of 80,00 people, and nearby low-lying fishing communities. Powerful gusts blew out windows in tall buildings and tossed around glass and debris.

Laura arrived as one of the strongest hurricanes ever to strike the U.S. based on its wind speed of 150 mph. Louisiana took the brunt of the damage when the system barreled over Lake Charles, an industrial and casino city of 80,00 people, and nearby low-lying fishing communities. Powerful gusts blew out windows in tall buildings and tossed around glass and debris.

Police spotted a floating casino that came unmoored and hit a bridge. Drone video showed water surrounding homes with much of their roofs peeled away. Gov. John Bel Edwards reported Louisiana’s first fatality — a 14-year-old girl who died when a tree fell on her home in Leesville, more than 100 miles inland.

“It looks like 1,000 tornadoes went through here. It’s just destruction everywhere,” said Brett Geymann, who rode out the storm with three family members in Moss Bluff, near Lake Charles. He described Laura passing over his house with the roar of a jet engine around 2 a.m.

“There are houses that are totally gone. They were there yesterday, but now gone,” he said.

Hours after the system made landfall, initial reports offered hope that the destruction might be somewhat less than originally feared, but a full damage assessment could take days. Wind and rain blew too hard for authorities to check for survivors in some hard-hit places. Meanwhile, Laura began weakening as it churned toward Arkansas, which was under an unusual tropical storm warning.

Hundreds of thousands of people were ordered to evacuate ahead of the hurricane, but not everyone fled from the area, which was devastated by Hurricane Rita in 2005. 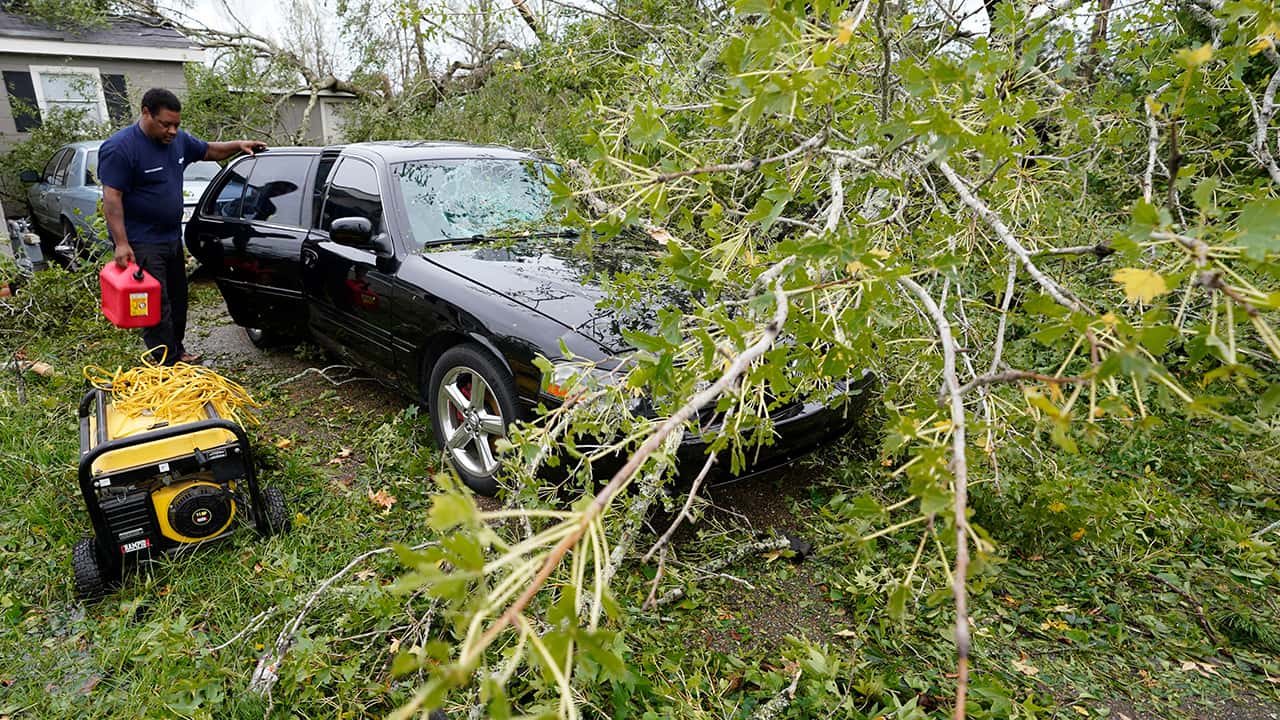 Reginald Duhon prepares to work at his home on Thursday, Aug. 27, 2020, in Lake Charles, La., after Hurricane Laura moved through the state. (AP Photo/Gerald Herbert)

More Than 600,000 Homes and Businesses Were Without Power in the Two States

“There are some people still in town, and people are calling … but there ain’t no way to get to them,” Tony Guillory, president of the Calcasieu Parish Police Jury, said over the phone from a Lake Charles government building that was shaking from the storm.

Guillory said he hoped the stranded people could be rescued later in the day, but he feared that blocked roads, downed power lines and floodwaters could get in the way.

“We know anyone that stayed that close to the coast, we’ve got to pray for them, because looking at the storm surge, there would be little chance of survival,” Louisiana Lt. Gov. Billy Nungesser told ABC’s Good Morning America.

More than 600,000 homes and businesses were without power in the two states, according to the website PowerOutage.Us, which tracks utility reports.

Arkansas Gov. Asa Hutchinson declared an emergency ahead of Laura and set aside $250,000 for the state to prepare for the hurricane’s impact in his state. Hutchinson said the state will have search-and-rescue teams on standby.

Forecasters had warned that the storm surge of 15 to 20 feet would be “unsurvivable” and the damage “catastrophic” along a stretch of coast from Lake Charles to Port Arthur, Texas. Damaging winds extended outward as far as 175 miles, according to the hurricane center.

More Than 580,000 Coastal Residents Were Ordered to Join the Largest Evacuation Since the Coronavirus Pandemic

Dick Gremillion, the emergency director in Calcasieu Parish, said authorities were unable to get out to help anyone or survey the storm’s effects.

More than 580,000 coastal residents were ordered to join the largest evacuation since the coronavirus pandemic began and many did, filling hotels and sleeping in cars since officials did not want to open large shelters that could invite more spread of COVID-19.

“The wind is still over 50 mph. It’s going to have to drop significantly before they can even run any emergency calls. We also need daylight,” Gremillion said in an interview with Lake Charles television station KPLC.

More than 580,000 coastal residents were ordered to join the largest evacuation since the coronavirus pandemic began and many did, filling hotels and sleeping in cars since officials did not want to open large shelters that could invite more spread of COVID-19.

But in Cameron Parish, where Laura came ashore, Nungesser said 50 to 150 people refused pleas to leave and planned to endure the storm, some in elevated homes and even recreational vehicles. The result could be deadly.

“It’s a very sad situation,” said Ashley Buller, assistant director of emergency preparedness. “We did everything we could to encourage them to leave.”

Becky Clements, 56, did not take chances. She evacuated from Lake Charles after hearing that it could take a direct hit. With memories of Rita’s destruction almost 15 years ago, she and her family found an Airbnb hundreds of miles inland. 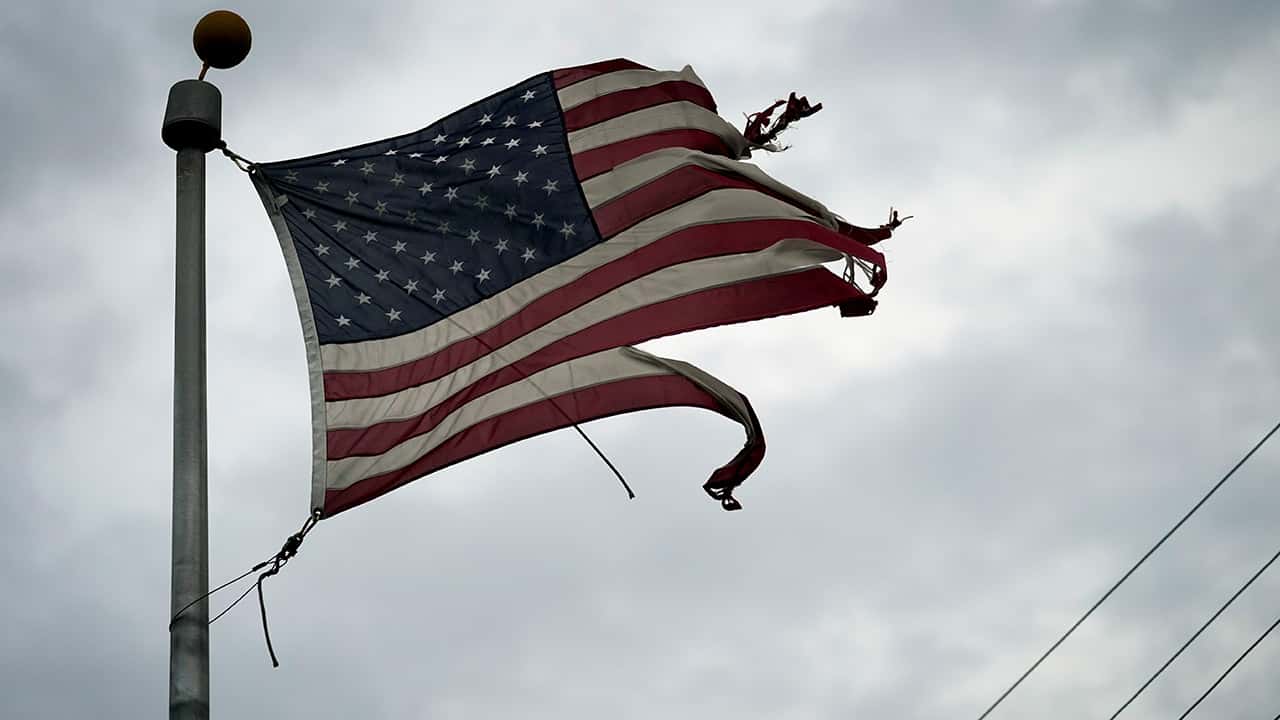 A tattered American flag blows in the wind in the aftermath of Hurricane Laura Thursday, Aug. 27, 2020, in Port Arthur, Texas. (AP Photo/Eric Gay)

Laura Hit the U.S. After Killing Nearly Two Dozen People on the Island of Hispaniola

“The devastation afterward in our town and that whole corner of the state was just awful,” Clements recalled. “Whole communities were washed away, never to exist again.”

Federal Emergency Management Agency Administrator Pete Gaynor urged people in Laura’s path to stay home, if that’s still safe. “Don’t go out sightseeing. You put yourself, your family at risk, and you put first responders at risk,” he told “CBS This Morning.”

FEMA has plenty of resources ready to help survivors, Gaynor said. Edwards mobilized the National Guard to help, and state Department of Wildlife crews had boats prepared for water rescues.

Forecasters expected a weakened Laura to cause widespread flash flooding in states far from the coast. Little Rock, Arkansas, expected gusts of 50 mph and a deluge of rain through Friday. The storm was so powerful that it could regain strength after turning east and reaching the Atlantic Ocean, potentially threatening the densely populated Northeast.

Laura hit the U.S. after killing nearly two dozen people on the island of Hispaniola, including 20 in Haiti and three in the Dominican Republic, where it knocked out power and caused intense flooding.

It was the seventh named storm to strike the U.S. this year, setting a new record for U.S. landfalls by the end of August. The old record was six in 1886 and 1916, according to Colorado State University hurricane researcher Phil Klotzbach.